Failure is your companion. It is the element of success. Study it. Invite it to your life. And don't let it out until you've fully understood it.

Have you ever wished to know the formula for success? Adams Scott, in his book, says that he can't provide that, but he can present a model for you to compare with the current way you do things and discover how to achieve your goals.

Perhaps you will find the answer to success by matching what you are doing with what the author has to present. After all, the best appraiser of what works for you is yourself.

Without intending to provide a definitive guide to success, "How to Fail at Almost Everything and Still Win Big" will show you, with great sincerity and spontaneity, what the author has done and worked for him. And of course, it can work for you too.

You're curious, aren't you? So let's get to this content!

The book was written by Scott Adams. It features a relaxing read that invites you to laugh at your own failures, after all, the greatest success is being happy.

All content is covered in its 304 pages which are divided into 38 chapters, showing how failure can be a school as long as it has a method.

About the author Scott Adams

Scott Adams, born in 1957 in New York, is the creator of Dilbert - cartoons that satirize business life, appear in about 1550 newspapers and magazines around the world.

The author holds various positions in large companies and has accumulated many experiences through his failures. In addition, he is a speaker and author of other nonfiction bestsellers, as the book "Win Bigly".

The content of the book will teach you how to learn from your own mistakes and to come up with original and useful ideas for success.

If you believe that success is built only on victories, this work will present you with a completely different view. This way, if you are just beginning your journey to success, or want to know what you have been doing wrong so far, you can find the answer here.

On the subject presented in the book, we've put together the best strategies so that you can develop skills and knowledge to draw valuable lessons from failure.

The main points of the book in a few sentences are:

Overview: "Failure is a Manageable Resource"

Successful people often hide their failures, making us think that they have a touch of talent or even luck. The author Scott Adams has collected a variety of jobs and business adventures that show just the opposite.

Of course, most of them ended in failure. Let's check some:

"My interview with the recruiter went well. I explained that I had no sales skills, but I liked to talk. And what is selling, I asked rhetorically, but a way to argue with customers until you win?".

Yes, the author didn't get the job but learned to look for possibilities in areas that had some advantages. And cartoonism was one of them.

As the place had few restaurants in relation to the number of people, all establishments were full, no matter the price or quality of products and services.

However, Adams didn't expect that increasing the quality of food and service, standing out in the region, would all go the wrong way. According to him,

"Operating costs have grown steadily, and new restaurants have begun to open and nibble on our customer base. While the first restaurant still yielded, we decided that our biggest problem was not having enough seats for the busiest nights, so..."

However, people don't choose a restaurant just because it's large. The outdoor space turned out to be a noisy wind tunnel. What's more, customers found the prices very high and the decor very sophisticated.

To make matters worse, a restaurant-only mall was opened near the site. Then some legal problems arose.

"We had one lawsuit or one threat of prosecution after another, mostly for ridiculous reasons. None of the legal threats or actions came from customers. It was the kind of thing we had never heard of," says Adams, who sold all the assets and left the business.

Scott Admas has passed through many other failures, by the way, that is the point. Success is totally affordable, even if you are a person who makes mistakes in 95% of attempts.

The book "How to Fail at Almost Everything and Still Win Big" says that we as people want many things: health, money, fun, travel, career, love and more. But there is a very important obstacle: time.

That's because the time you spend chasing each of these things impacts the time you won't have chased to all other things. So how do you manage the limited time to get the best result?

The way Adams addresses the issue is as follows:

"I focus on just one major metric, energy. I make the choices that maximize my personal energy because it makes it easier to manage all the other priorities."

And that means eating well, exercising, getting rid of unnecessary stress, sleeping well, and so on. When we reach our appropriate personal energy, we work with higher quality and faster, as well.

However, we are talking here about a focused and controlled energy. It doesn't mean that you should be caffeine-driven, nor do you assume a frantic lifestyle. Just that, in other people's eyes, you will look like a good-humored person. Well, actually it will be.

Remember energy as something that boosts the mood, be it physical or mental.

Overview: "You are not condemned to mediocrity"

One day a three-year-old child was playing next to several teenagers. The child repeated the action of hitting a tennis ball intensely. He bounced the ball, staring at it and then swinging the racket.

While repeating the activity, despite being sociable, the child ignored everyone around him and focused his attention only on the ball.

That's when Scott Adams decided to

"give him an impromptu lesson about the proper way to use a racket. I asked him for the racket, saying I wanted to show him how to use it. I demonstrated how to hold the racket and how to swing it. He tried to do it and, with some guidance, repeated my balance more or less."

What was surprising about this three-year-old was his ability to train. Most adults may never reach this level. The importance of practice is undeniable. But what is really hard is figuring out what to practice.

In fact, whatever your area, your natural ability is unlikely to change. Of course, new skills can always be learned.

"It's naive to expect the average person to embrace endless practice for long-term success. It makes more sense to work out a life plan that embraces your natural inclinations".

The book "How to Fail at Almost Everything and Still Win Big" highlights that most natural propensities have some kind of economic value if you direct them in the right way.

Overview: "Does the belief in pure luck work against you?"

An issue that few people like to talk about when it comes to success: luck. Scott Adams says his view of the world is that every success involves luck in some part of the journey.

Steve Jobs, when he met Steve Wozniak, needed to own the DNA he has. Or Warren Buffet made an observation regarding his abilities. If he had been born at another time, his natural talents would not have matched the opportunities that came his way.

"all elements of personality, from perseverance to risk tolerance, ambition, and intelligence are products of pure chance. Every decision you make is simply a product of the mathematics of these variables".

However, if you believe that success is the result of luck, you may not be working hard enough to achieve it. No matter the circumstances or even the genes, you still have to work hard to succeed.

Now there is only one question left: "Will you ever make people say you were lucky?".

James Clear in "Atomic Habits" explains how small changes can yield big results. According to him, habits are the compound interest in personal improvement. Improving 1% each day generates a giant change at the end of the journey.

However, Ben Horowitz, in "The Hard Thing About Hard Things", says that the big difference between those who achieve their goals, those who succeed from those who fail, is not giving up.

In "Awaken the Giant Within", Tony Robbins explains how decisions and beliefs are important to achieving positive change and becoming the person you want to be.

"Think of yourself as a robot. If you control the input data, you will be able to determine the results, with some luck. Eat right, exercise, think positively, learn as much as possible and good things can happen".

Always look for patterns at every point in your life, from physical activity to the food you eat. In other words, use yourself as a lab to test what works and what doesn't work for you.

Finally, keep in mind that goals are for losers and methods for successful ones. Those people who look lucky are usually the ones who have methods. This makes it possible for luck to find them.

Did you like this summary of the book "How to Fail at Almost Everything and Still Win Big"?

What did you think of this content? Leave your feedback, so we can always offer the best for you!

And if you want to go deeper into the subject, get the book now by clicking on the image below: 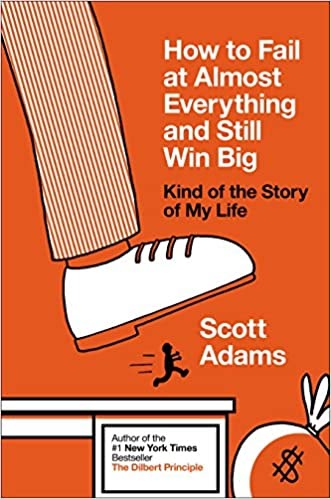