Discover the tools that help in risk management to make decisions and learn how to use the “filtering, nonsense-expurgating mechanism” to achieve success.

Do you know the meaning of "skin in the game"? Have you ever wondered how the lack of correspondence to risks can lead to imbalances and, potentially, to systemic ruin? Or, have you ever seen someone pay the penalty for what they did not do?

Today considered one of the most used expressions in the financial market, "skin in the game" is a practice applicable not only in the business world, but in life as a whole.

In this summary, we will talk about the importance of bearing the consequences of our own actions and how avoiding this attitude can cause serious damage to society.

Do you want to know more? So, join us on this worthy adventure of exposure to risks and obtain powerful and valuable lessons with the summary of the book that impacted the world!

The book "Skin in the Game"

Published in 2018, "Skin in the Game: Hidden Asymmetries in Daily Life" is an essay by Nassim Taleb. His main thesis revolves around the importance of taking risks and asymmetries in lives when these are transferred to others.

The work is divided into 8 parts with a total of 19 chapters and 312 pages, as well as it is part of the entitled "Uncertainty Project" which seeks to defend that "the asymmetry in the exposure to risks leads to imbalances and, potentially, to systemic ruin".

Who is Nassim Nicholas Taleb?

Nassim Nicholas Taleb is Lebanese and comes from an influential family. He became a Lebanese-American risk analyst, writer, statistician and mathematician (with a bachelor's, master's and Ph. D. from the Université de Paris and an MBA from the Wharton School). He is recognized for being a major investor in the financial market, president of Empirica (investment company) and an advisor to the Universa Investments.

Considering his vast experience, it is worth mentioning his occupation as a managing director of Credit Suisse and his achievement of financial benefit from crises such as the "Crash of 1987" or "Black Monday".

He currently resides in the United States, where he works as a professor at the Polytechnic Institute of New York University.

His best-known works are: "Antifrágil", "The Logic of the Black Swan", "Deluded by Chance" and are famous for influencing world leaders, entrepreneurs and investors.

The book "Skin in the Game" by author Nassim Nicholas Taleb is suitable for investors, leaders, consultants, entrepreneurs and people who like to break paradigms and authenticity.

What are the key points of the book "Skin in the Game"?

The author Nassim Nicholas Taleb explains about the importance of "identifying and filtering, nonsense-expurgating mechanism", that is, the "bullshit". For this reason, in the course of reading his book "Skin in the Game", he explains the difference between theory and practice; true and cosmetic knowledge and academic world (in the pejorative sense) and the real world.

The Latin phrase "ludis de alieno chorio" means "playing with the other's life". Contrary to this idea, Taleb says that one should not change a system if the results are uncertain. In this case, it is appropriate to avoid actions with disadvantageous consequences.

The "x of the matter" is that, unfortunately, the disadvantage does not affect the interventionist. For Nassim Nicholas Taleb, in the first place, as well as the Hippocratic oath, are the axioms "never to cause harm or harm to someone" and "those who are not exposed to risks should never be involved in decision-making".

In this part of the book "Skin in the Game", Nassim Nicholas Taleb deals with the distortions of symmetry and reciprocity in life. In other words, this means that obtaining rewards is linked to risk exposure, and not allowing others to pay the price for their mistakes.

For the author, if someone infringes on risks to other people, and they are harmed, that person must pay a price for it.

In other words, the Lebanese investor's work deals with symmetry with a focus on coping with the errors and damage caused. This idea, according to the author, applies to various notions of incentives, ethics, contract theory, learning

(real life versus academic community), the Kantian imperative, among others.

"Bureaucracy is a construction by which a person is conveniently separated from the consequences of his actions."

Robert Rubin or Bob Rubin is a former United States Treasury Secretary (one of those who sign his name on the dollar bill) and is also well known for his worldview based on the distribution of probabilities, as well as uncertainty.

Nassim Nicholas Taleb, in turn, mentions him referring to his role as a trader. The author disagrees with the posture of people who, when they make money, keep profits, but when they lose, they transfer the costs to others and shout "Black Swan!" (meaning "unpredictable / uncertain and high impact event").

Nassim Taleb explains that with each mismatch between an annual bonus interval and a statistic of an economic crisis, the agent is encouraged to transfer risks in the style of Bob Rubin.

So, given that there are many people trying to make a profit, there is an increasing likelihood of Black Swan risks in these systems. Therefore, the systemic explosion occurs.

According to Nassim Nicholas Taleb in the book "Skin in the Game" it is necessary to measure the amount of information that a person must share, in a practical way, with others and to consider what should or should not be said.

Knowledge through improvisation, that is, through trial and error, repetition and experience, "contact with the land" (titled by the author) is much greater than that obtained by reasoning. In this sense, the author points out that this is something that selfish institutions have been dedicated to hide from society.

The interventionist case teaches you how not to risk your own skin. Nassim Nicholas Taleb explains the basis of this case for history by pointing out that it causes ethical as well as epistemological effects (which refer to knowledge).

According to the author in the book "Risking his own skin", interventionists do not learn because they do not suffer consequences for their mistakes:

In this sense, for the Lebanese, it is not possible to fully convince someone that he is wrong and only reality is capable of provoking this effect. So, what matters for reality is survival.

The curse of modernity, in turn, is that most people are better at explaining than understanding and/or doing.

"There is no evolution without risking your own skin."

That way, people don't learn much from their own mistakes and those of others, but the system learns through elimination. That is, according to Nassim Nicholas Taleb, the system selects people who are less prone to a specific class of errors and eliminates others.

Taleb teaches that risking your own skin is a necessity, but you can't let it go and apply it to everything in sight and in every detail, particularly when there are consequences.

In this sense, there is a difference between the interventionist who can cause irreparable damage and a harmless opinion. Anyway, "risking your own skin keeps human pride under control."

To cover part of the wisdom of human history and show that the rules were being refined along with civilization, the main quotes collected by the author of the book "Skin in the Game" are presented:

The famous Law of Talion comes from the Hammurabi's Code and can be read in the book of Exodus 21: 24:

It is a much more flexible metaphor than it seems at first, that is, you don't have to literally take someone's eye out. In this sense, this Code establishes "symmetries between people in a commercial transaction, so that no one can transfer hidden tail risks, or Bob Rubin-style risks".

"You will love your neighbor as yourself."

Nassim Nicholas Taleb states that this Law is found in the book of Leviticus 19, 18 and is fundamental to put the skin at risk in a dignified and consistent manner.

"In everything, do to others what you want them to do to you."

Based on this quote found in the Gospel according to Matthew 7.12, the author of the book "Skin in the Game" emphasizes that one should avoid listening to advice from someone who, in life, only gives advice and not something else. The exception to this rule, according to Nassim Nicholas Taleb, is that he suffers a penalty for these councils.

"Act only, according to such a maxim, that you may want at the same time that it becomes universal law."

For Taleb, analyzing this quote from Kant, 1785: 4: 421, "universal behavior is excellent on paper, but disastrous in practice." He argues that the micro works better than the macro and that it should focus on the immediate environment with the aid of practical and simple rules.

Rationality in the real world

"Contact with the real world is made by risking your own skin."

In the real world, rationality is tied to survival in a very profound and measurable way. In fact, according to author Nassim Nicholas Taleb, "you can't separate anything from contact with the floor." That is, exposing yourself to the real world means paying for the good or bad consequences of your own actions.

In the book "Skin in the Game", the author says that experiences that cause wounds serve as a guide for learning and discovery. What the Greeks called "pathemata mathemata" is exactly this:

"Guide your learning through pain."

In other words, this is an organic signaling mechanism. Nassim Taleb says that mothers of young children have this mechanism. Thus, when a baby cries, for example, the mother develops interpretations for each type of crying, even discerning when the baby is hungry or wants to be held.

Nassim Nicholas Taleb says that there are "educated idiots", that is, they would be those semi-literate and labeled muggles. Therefore, the author lists its three flaws:

In the book, "Mastering the Complex Sale", Jeff Thull presents a manual that helps to create appropriate strategies for complex and high-risk sales. It also teaches you not only how to recruit customers, but the biggest secrets that marketing has ever known.

In the book "Do Mil ao Milhão", Thiago Nigro simplifies the concepts of investments and the financial market and makes everyone able to invest and get their first million from fixed income, considered safer, to variable income (with more exposure) risks).

Finally, with a very light writing, the book "Geração de Valor 1: Compartilhando Inspiração" by Flávio Augusto teaches you to think outside the box, believe in your own potential and achieve all your goals.

Okay, but how can I put my skin in the game?

The book revolves around rationality and the test of time. In this sense, Nassim Nicholas Taleb presents some points to note:

Did you like this summary of the book "Skin in the Game"?

What's up! How about a challenge? Prove to us and to yourself that you can risk your own skin, sending your feedback on what you think of this summary! Your considerations are very important to us.

Did you identify yourself with the book "Risking Your Own Skin" by Nassim Nicholas Taleb and already want to buy? Just click on the image below: 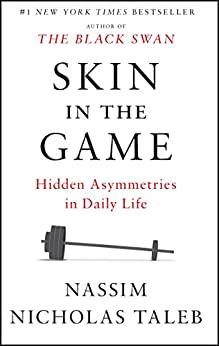