How did two companies that started from scratch and went through many wrenches become a reference in the world of transportation and accommodation? Come to know the history of Uber and Airbnb here.

Currently, Uber and Airbnb are the most representative of a new generation of technology companies: "The upstarts", as author Brad Stone calls it.

With their eccentric creators and proposals not precisely innovative in their purpose, but disruptive and revolutionary in the model in which they are portrayed, these companies are facing conventions, beyond the rules and rules that are outdated by the rapid rise of these new businesses.

Aiming especially at the trajectories of Uber and Airbnb, this work is an exhibition of the origin, growth and giant impact, positive or negative, of these young Silicon Valley monsters in the business context and in the lives of us all.

A frank and accurate analysis of an era of business that will transform the world, regardless of cost.

About the book "The Upstarts"

Published in 2017, "The Upstarts", written by Brad Stone, tells the story of two sensations: Uber and Airbnb. With them, we will see how an entrepreneur's enormous drive and self-confidence can change the world and still generate wealth.

The book has 384 pages and 12 chapters that are divided into three parts: "Parallel Projects", "Building an Empire" and "The Upstarts Judgment".

About the author Brad Stone

Brad Stone is a writer, American journalist, senior executive editor of global technology at Bloomberg News and bestselling author: "The Everything Store".

In addition, he has worked for several renowned American newspapers such as Newsweek, New York Times and Bloomberg Businessweek.

Even if you have never used the Uber app or stayed in an Airbnb home, your life has certainly been impacted by these two companies, and you will see for yourself the many unfolding battles of these giants and the innovations that are still comming.

So, in addition to a story of overcoming and success, "The upstarts" is a portrait of an era and a must-read for anyone who wants to understand both the world today and what's to come.

Main ideas of the book "The Upstarts"

Download the "The Upstarts" Book Summary in PDF for free

Overview: The early years of...

As narrated by author Brad Stone in his book "The Upstarts", in September 2007, designers Nathan Blecharczyk, Brian Chesky, and Joe Gebbia, creators of the Airbnb platform, were out of money to pay for their apartment rental in San Francisco.

So they had the idea of taking advantage of the World Design Congress to transform the apartment into a Bed and Breakfast. This is because, during the event, the flow of the city increased considerably, as well as the prices of accommodation.

Guests would be entitled to Wi-Fi internet access, an office, a sleeping mattress and breakfast during the four days of the event. With the money that would be raised, young people could pay the rent of the apartment.

In the beginning, the Airbnb website allowed guests to find compatible roommates based on Facebook profiles and the Craigslist online rental classifieds site. However the early years of the site were of low demand.

Garrett Camp and Travis Kalanick, two Americans from San Francisco, had become millionaires with the sales of their respective companies. Kalanick sold his company Red Swoosh for $ 20 million, while Camp sold his StumbleUpon site for $ 75 million.

However, it was at the Paris technology and entrepreneurship congress that an idea began to emerge. Faced with the hassle of not being able to find a taxi, the two entrepreneurs thought: "What if people could order a transportation just by opening an app in the palm of their hands?".

Upon returning to San Francisco, they began to come up with the idea, meeting with a mobile application consulting firm called Mobly who would create the application, but that would not happen until 2009.

At first, called Ubercab, the app offered only luxury cars. In other words, Ubercab was a traditional taxi service, but with luxury cars.

The company went through a number of difficulties: it faced the resistance of several regulators that control the hosting industry in several cities, a cloning situation on its website, which caused a major inconvenience.

In addition, he had to deal with a time when a homeowner reported having his belongings stolen, and the apartment vandalized by an Airbnb guest.

This situation ended up generating a broadly negative repercussion for the company's image. It was the hardest time the young Silicon Valley entrepreneurs were facing.

Several such situations were happening and problems between hosts and guests were frequent, causing the company to pay many damages.

Brad Stone reports in his book "The Upstarts", that to solve these problems, the founders made a safer option available to platform users. Then the guest and host rating system was created.

This way, other people will see the review before choosing your host or accepting your guest. In addition, the company created a 24-hour customer relationship channel so they could report possible complaints.

To solve the cloning problem, young people had to buy one of the clones. From then on, the company started to settle.

The early years were difficult. Uber struggled to attract investors, which came from the fact that the company had regulatory issues with the local taxi market. In addition to the difficulties it had to make a person registration.

In the second half of 2010, the company received an order from the taxi regulator stating that Uber was an unregulated taxi company.

According to the author, insisting on the operation would result in a fine of $ 5, 000 per race and more ninety days in prison for each day of operation.

To solve this problem, the company's lawyers argued that Uber was not a taxi company. It was nothing more than an intermediary between passengers and drivers. Thus, this claim allowed the company to continue to operate.

This regulatory victory was a moment of great fortification for the company, with a very favorable impact on Silicon Valley technology blogs, increasing the number of races considerably, about 30% higher than the previous month.

One big change in the company's path was "Y Combinators", an accelerator. After that, the company actually began its growth, mainly with the support of Nathan Blecharczyk's strategies, which had a broad knowledge of search engines and ads.

Nathan was the forerunner to using Facebook's ad systems, becoming an expert on users' most searched keywords, creating catchy ads and placing Airbnb at the top of search engines.

With Jung's expansion, Europe quickly became the company's largest market. However, the company dealt with regulatory hurdles and had not yet been able to settle in New York, where the hotel industry is deeply unyielding. Belinda Johnson has been called to take the lead and deal with the company's legal problems.

To enforce rental regulations in cities such as Chicago, Washington, and Phoenix, the company began charging hosting fees as well. From Johnson's negotiations, Airbnb was increasingly acting in a fully legalized manner.

In 2016 the company had over 2, 600 employees, and was valued at $ 30 billion, the fourth most valuable startup on the planet, more valuable than any other hotel chain. Currently, the site also offers innovative options such as boats, airplane suites and igloos.

According to the book "The Upstarts", in the second half of 2010, the company received significant investments from "A Group", which was led by Bill Gurley, making Uber valued at $ 60 million.

Faced with this great potential, the company began to expand throughout the United States. In this growth, one person stood out, the intern Austin Geidt, who later became head of driver operations.

Even with the regulatory issue resolved in San Francisco, the company had problems again, especially in New York, which required luxury car drivers to be associated with some base.

However, Kalanick refused to register Uber as a base, because the fees and requirements the company would handle to bear would be many.

The waiting time of the customers was quite high, since the recruitment of taxi drivers was also very difficult in New York, that is, the number of drivers was really limited.

To solve this problem, UberX was created. Now, instead of luxury cars, any driver could transport a passenger to their destination.

The price would be fixed before the race began, and the customer could follow the entire driver's route in real time.

In addition, to further increase the number of drivers, the company created the mode of high demand. The fare of the race would be increased by X%.

"The Airbnb Story" tells the story of the company that offers an online home sharing service. Leigh Gallagher's work says that Airbnb's concept arose from the founders' need to pay rent.

In "Start Something That Matters", Blake Mycoskie shows the connection between social purpose and entrepreneurship. To this end, the book presents how Blake brought personal, professional and philanthropic ambitions together in a single mission by creating a company that donated shoes for Argentine children.

In the book "The Lean Startup", the author Eric Ries teaches how it is possible to validate ideas to know whether the product adds value to customers or not. This is called MVP or "minimum viable product".

Several actions have made Airbnb and Uber the companies they are today. But the values adopted by them in the book "The Upstarts", certainly contributed greatly in the search for results. They are:

Did you like this summary of the book "The Upstarts"?

If you enjoyed Brad Stone's work, "The Upstarts", leave your feedback to let us know your opinion and always offer the best to you! 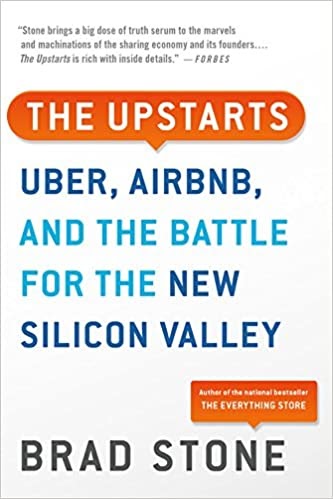