Learn the story of the businesswoman who brought Starbucks to Brazil and be impressed with valuable lessons.

Who is not in love with a good coffee? Especially in Brazil, considered the coffee country. So, you have probably heard or perhaps tried Starbucks coffee, the company with the most coffee shops in the world. Luciana Medeiros tells in the book "Vai um Cafézinho?" the story of Maria Luisa, who brought Starbucks to Brazil.

We heard a lot about her, but little is said about how they came to Brazil, who was in charge, what strategies they used and how they expanded. Certainly, you will extract good insights and inspirations from this trajectory.

Want to know the story of the person responsible for it and how it all happened? Stay with us in this reading!

About the book "Vai um Cafézinho?"

The book "Vai um Cafézinho?" Was published in 2019. The author Luciana Medeiros intends to expose the story of Maria Luiza, a great visionary leader, and entrepreneur who achieved many achievements in her life and delighted people she passed.

The author can gather many specific and striking information, such as testimonials from important people who had the opportunity to work with Maria Luisa, faxes during her communications, and a picture notebook.

About the author Luciana Medeiros

Luciana Medeiros is a carioca and journalist. During her professional career, she has worked for major radio stations and newspapers. In addition, she participated in the books "Antonio Meneses: Architecture of the Emotion", "Guiomar Novaes do Brasil", "25 Chroniclers Speak of Overcoming", among others.

The content of the book is ideal for you who like big biographies that are responsible for influencing millions of people, especially when you have a great leader as your protagonist.

In addition, content is for you searching for good examples of persistence and characteristics that lead you to success.

At the beginning of the book, the author tells the story of Maria Luisa's family and the details of her parents' lives before she came into the world. With his birth in 1958 began an intense period of dedication to her.

When she reached school age, Maria Luisa went to know the Portuguese language in this new environment, because she only listened to her parents' Calabrese. Also, she later learned the Italian language.

The author tells us details of her relationship with her mother and her commitment to study. Later it was time to learn English, the language that gained importance for her professional life.

In 1977, it came to her approval at the Faculty of Letters of PUC. The dedication, joy, and focus during college were outstanding qualities of Maria Luisa.

As soon as she finished college, she didn't have time to continue her studies, she applied for a bilingual secretary job with the president of McDonald's.

At that time, McDonald's had just arrived in Brazil and was not so well known, had only 3 stores.

Maria Luisa had all the characteristics sought, was young, with claws, and bilingual. So, she began to be part of a team that sacrificed even her personal life for the company's accomplishments.

Her new boss, Peter, led a simple life and became his new source of inspiration. The inspiration that made her become a businesswoman.

At the same time, Mcdonald's grew and Maria Luísa gained voice and great responsibilities, thanks to its incredible characteristics. Within a short time, she mastered the office management functions and all her support was essential.

At that very moment, she and Peter already recognized that mutual attraction was rolling, but it was not progressed by the strict rules of the company.

At 28, the time has come for new challenges. She accepted the invitation, packed her bags, and left for Chicago, taking over as assistant to Patrick Flynn, the vice president of McDonald's Latin America.

In this experience, she took with her a desire to absorb everything she could.

To replace her, it was necessary to hire 3 new people. Meanwhile, she lived in Chicago at the company's headquarters. It was the first time that it was established outside Brazil, the experience lasted for a year and a half, enabling huge professional and personal growth.

In addition, she was able to establish a good network of contacts because of her great charisma and great people manager, in charge of great responsibilities.

This love that arose before she traveled was responsible for bringing her back to Brazil. Peter asked Maria Luisa to marry him and since then a new phase of her life has been established. She has carefully and thoroughly taken care of all the details of this ceremony.

Overview: Back to school

According to Luciana Medeiros, Maria always wanted to study MBA in business in the US. But that desire was postponed by the proposal to hold the position of sales manager for American Airlines, which lasted for some time.

Now her new address was Cambridge, and the goal was to gain knowledge for her project as an entrepreneur in order to bring big business to Brazil.

Peter decided to return to his studies at Harvard and decided to move away from the business. In 1994, he sold his share of McDonald's.

He created a great deal of intimacy and admiration for Starbucks, as he had one very close to his neighborhood.

Starbucks was still growing and was betting on its gourmet products. Taking this idea to Brazil was already becoming a purpose. That was the beginning of strategies for contacting the president of Starbucks.

He even sent a fax reporting what he intended to accomplish, but the answer was that efforts were focused on Asia and North Pacific countries.

Her new challenge was now the CFO position of Outback Steakhouse in Brazil, becoming the fourth partner. In addition, she became a sweet and firm commander of that success. In 2001, there were already 7 units in operation and exceeding all targets.

All the lessons learned at McDonald's were being put into practice, the duo Maria Luisa and Peter were becoming great keys to success.

Maria Luisa had an unbelievable gift for the relationship, she could treat everyone the same, with great care and affection. The way she performed her leadership was hard to explain.

While the Outback chain grew enormously in Brazil, Maria kept her other eye focused on the coffee market.

In 2002, Pablo Arizmendi-Kalb, a member of the Starbucks development team met with her, as his goal was to gather information and investigate prospects for partners.

Between comings and goings, Starbucks was marked by a lot of indecision. Only in 2005, the search for partners resumed, but there was a lot of competition to bring the company.

After a lot of trouble, a new date came out that seemed to make Maria's dreams come true. Now it looks like the game was reversed, Starbucks managers wanted her and Peter in their business because of all the success they had at Outback and McDonald's.

The development team made Maria Luisa a favorite. As a result, there were numerous planning meetings and later business plan presentations to Starbucks executives in Seattle.

At this point, she was very cautious and relied heavily on the experiences of Outback, McDonald's, and on Peter's help.

On the day of her presentation, she did what she knew best. Proof of that was a simple and exciting "Congratulations, you are partners in Brazil" by Starbucks president Martin Coles, right after her presentation.

Thus, the first store in Brazil was released in December 2006, in São Paulo. After much preparation, hard work, innovations in setting up in a new country, and great detailed negotiations, Maria's dream came true.

The author tells us in detail how this planning took place, the composition of the company, details of the contracts, all operations, and their responsible, training, and recruitment process.

Innovation was an essential process judged by Maria as it was a new market. Then changes were made to the marketing and communication scheme, and the relationship with local suppliers was changed.

All growth and success have been achieved in ways never seen before. During this time, the press paid great attention to the launch of the cafeteria, and she used the best techniques and strategies in favor of the company.

"We are not in the coffee segment serving people. We're in a business involving people and serving coffees."

Throughout Maria Luisa's learning journey, it was possible to gain much experience and skills. Thus, the author lists some fundamental advice that made her become a person of triumph:

Maria Luisa performed her leadership role at all times, including those tough days without sending a message.

By 2007, the sixth, seventh, and eighth stores were already under construction. In addition to all this success in Brazil, Maria Luisa was successful abroad because of the internal results achieved. As a result, she participated in Starbucks international events, obtaining great recognition.

To celebrate all the success needed a break, the time had come to announce your vacation. It was time to leave for Australia with Peter and live unique moments.

The next day she returned from her trip, she was eager to get back to work. She took a taxi just after 6 am.

In an overtaking, the vehicle crashed head-on with a bus, none of the bus passengers died, but Maria Luiza and the taxi driver died instantly.

The burial took place on the same day, and the press reported and mourned the accident. According to the author, it was horrible to share this news with friends and the entire company.

The only thing left was pride and excitement over the beautiful trajectory created with such love for Maria. A year after her death, Starbucks created a "Spirit of Starbucks" award that honors the Brazilian team.

In their recommended "Everybody Matters", the authors explore how true leaders must continually study to develop those around them so that they can also become excellent leaders who believe and value people.

Brené Brown, in "Dare to Lead", says that a leader must take responsibility for recognizing the potential of people and their ideas and encouraging them to develop that potential. He knows that the true power is that shared with all.

"Maria Luisa had this unique and special ability to bring people closer. It is not easy to find women with your courage combined with a healthy respect for Starbucks tradition. He acted naturally and spontaneously. And it was so true!"

Finally, Jorge Paulo Lemann, considered to be the richest businessman in Brazil, says:

"Maria Luisa was very active, a precursor in Brazil in terms of her interest in the business world. I'm sure she would have liked to see Brazilians occupying more and more positions of power."

Maria Luisa was a fantastic person and was an inspiration to many of her employees. Throughout the book review, we have great examples of leadership and management model, as well as some advice.

Have the advice and practices presented to take over your routine, and you will see the results appear.

Did you like this summary of the book "Vai um Cafézinho"?

Are you feeling more inspired now with this amazing story? Did you find this content useful for you? Leave your feedback in the comments! 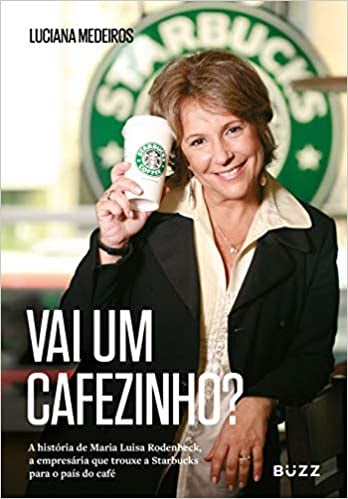