Be inspired by the story of how a boy who sold pens on the streets of Rio de Janeiro became a great communicator and one of the wealthiest entrepreneurs in Brazil.

Arlindo Silva narrates the trajectory of one of the greatest Brazilian entrepreneurs and communicators, Silvio Santos, in his book "The Fantastic Story of Silvio Santos".

Through this biography, see how persistence and dedication are essential to achieve your career and business goals, and understand the importance of developing the right skills to turn your dreams into reality.

About the book "A Fantástica História de Silvio Santos"

The book "A Fantástica História de Silvio Santos", "The Fantastic Story of Silvio Santos" in free translation, was written by Arlindo Silva and published in 2002, by Seoman.

This biography shows how a street vendor turned into an admired businessman and the head of one of Brazil's largest media companies.

With 296 pages, this book is recognized as the best biography of Silvio Santos, being considered the official version of the SBT owner's career. Every challenge, failure, and success experienced by him has a lot to teach those who seek to excel in life, career, and business.

About the author Arlindo Silva

Arlindo Silva was a Brazilian journalist and writer who served as editor-in-chief of the former magazine "O Cruzeiro". He was largely responsible for the implementation of journalism in the TV channel SBT, which began in 1981.

A close friend of Silvio Santos since the 1970s, the author of this biography was a spokesman for the entrepreneur from 1975 to 2000. When he retired, Arlindo ended his brilliant journalistic career as the communications advisor of Silvio Santos.

The content of "The Fantastic Story of Silvio Santos" is a source of inspiration for salespeople, entrepreneurs, professionals, freelancers, and other people who want to bring their projects to life.

Check out the main ideas of the book, narrated by the author Arlindo Silva:

In this summary, we will show the main challenges that Silvio Santos faced as an entrepreneur and, especially, what he did to overcome them.

At the beginning of the work "The Fantastic Story of Silvio Santos", Arlindo Silva tells about the childhood of Silvio Santos and shows his extraordinary ability to sell on the streets.

The name Silvio Santos is artistic and came about by chance in a presentation. The author begins his work by mentioning that the real name of this great communicator is Senor Abravanel.

Belonging to a poor family, Silvio Santos was born on December 12, 1930, in the neighborhood of Lapa, Rio de Janeiro. He had a relatively quiet childhood with his parents and six siblings.

However, when Silvio was 14 years old, his father started having serious problems with gambling and his family went through great financial difficulties. As a result, he interrupted his accounting course and decided to work.

Working as a street vendor

Silvio Santos observed several street vendors who worked in certain parts of Rio de Janeiro and saw that, in some cases, the sales flowed well. He soon thought that he could easily work selling stuff.

Always keeping an eye out for new opportunities, Silvio observed in particular a pen salesman who worked only an hour a day, enough time for him to sell all his products.

The author Arlindo Silva tells in the biography "The Fantastic Story of Silvio Santos" that, in a short time, Silvio started to use and improve the techniques of this salesman, doing magic tricks and interacting with people on the street.

In just one hour, he sold all his pens and earned the equivalent of 5 minimum wages at the time.

After working for just one hour, Silvio Santos would spend the rest of the day watching programs in radio auditoriums, always interested in making observations for his professional development.

After working as a street vendor and temporarily working on some radio stations, Silvio Santos started working at Rádio Continental, in the city of Niterói. Due to his work, he needed to take the last ferry back to Rio de Janeiro.

During these trips, as shown in the book "The Fantastic Story of Silvio Santos", Silvio had the idea of putting music to liven up the place. To get the sound structure, he made a deal with a company that would provide the equipment in exchange for advertisements. It was at this point that Silvio decided to leave Rádio Continental and became an ad broker.

The author Arlindo Silva mentions that, at that time, the spirit of business was born in Silvio Santos, since he felt immense joy in visiting and talking to customers, offering his services, and signing contracts.

Overview: The radio show and the presentations

In this part of the book, Arlindo Silva tells about Silvio's first great work on the radio and how his first artistic performances were.

Due to his amazing communication skills, Silvio Santos passed a test to act as a speaker at Rádio Nacional, in São Paulo. At the same time, maintaining his strong entrepreneurial spirit, he created a little magazine called "Brincadeiras para Você" ( "Pranks for You" in free translation).

This magazine, with crosswords, riddles, and anecdotes, made Silvio resume his activity with ad brokerage - which he loved to do.

Besides the radio work and magazine management, he began organizing his first circus shows, where he also acted as an entertainer when introducing the artists.

As the author tells in the book "The Fantastic Story of Silvio Santos", Silvio's success was so great that he received an invitation to the post of entertainer at Rádio Nacional. With that, he went on trips to perform shows with caravans of artists.

Overview: The "Baú da Felicidade" and many other businesses

Here, the author tells how "Baú da Felicidade" ( "Chest of Happiness" in free translation) came about and how the idea originated many other businesses.

Turning a problem into an opportunity

According to the author Arlindo Silva, the "Baú da Felicidade" arose out of a big problem: a financial blow applied by the partner of Manoel de Nóbrega. Manoel was a good friend of Silvio Santos and encouraged him a lot on Rádio Nacional.

To help his friend, Silvio put himself in charge of a business that was practically bankrupt. After organizing an efficient administrative structure, "Baú da Felicidade" started to sell toys, crockery, and housewares by catalog.

At that time, Silvio started a program on TV Paulista, in which there were shows, games, and awards based on "Baú da Felicidade". Called the "Silvio Santos Show", the attraction took over Sunday afternoons, and "Baú da Felicidade" made a leap of growth.

After the expansion of "Baú da Felicidade", Silvio started several other businesses. It is in this part of the book "The Fantastic Story of Silvio Santos" that the owner of SBT tells how he managed to build a business empire: reinvesting all the money in the company and new ventures.

This financial ability led to the emergence of other companies linked to the "Baú da Felicidade", in the areas of advertising, construction, stores, finance, concessionaires, insurance companies, and distributors.

Overview: The emergence of SBT

The author Arlindo Silva talks about the differentials used by Silvio Santos to give life to the dream of having his own TV channel and reaching every home in Brazil.

A great negotiator enters the scene

The skills of Silvio Santos are not limited to communication and sales. The countless negotiations made for the concession of his TV channel have demonstrated this.

The author emphasizes in the book "The Fantastic Story of Silvio Santos" that even senior government officials, during the 1970s, were surprised by the technical quality of the projects presented by Silvio.

The credibility, persistence, and demonstration of high technical and financial capacity made Silvio Santos be seen as the great businessman he was.

In December 1975, the first TV channel was granted to Silvio Santos Group, so channel 11 in Rio de Janeiro became SBT.

As the author Arlindo Silva tells, with the end of TV Tupi in 1981, 4 more channels were granted to the group. Also in 1981, the first broadcast of SBT was aired.

One of the conditions for this concession was that Silvio Santos would have to take in most of the former employees of TV Tupi, ensuring at least one year of stability. Not only did he do it, but he also offered twice the stability time. This demonstrates another striking feature of Silvio: the appreciation of the people who work with him.

This part of the book "The Fantastic Story of Silvio Santos" shows what motivated Silvio Santos to enter politics and why his plans did not go as he imagined.

Why did he want to get into politics?

The desire to get into politics arose in Silvio Santos during the days he spent alone in the United States. The author Arlindo Silva tells that the presenter was in medical treatment due to a serious health problem. The owner of SBT thought he should return all the affection of the Brazilian people.

For this, he would increase the population's access to food, housing, education, medical assistance, and transport.

As promising as Silvio Santos' name was in politics, that was not enough. Although he tried to be elected to the positions of mayor, governor, and president, the businessman refused to accept the often shady political agreements.

According to the book "The Fantastic Story of Silvio Santos", besides these factors, Silvio didn't agree with the way of financing the campaigns. Seeing up close how the power game worked, the presenter lost interest in politics.

Arlindo Silva reports a dramatic moment that the presenter went through and cites great joys that came in recognition of Silvio's work.

One of the most dramatic moments in Silvio Santos' life was the kidnapping of his daughter Patrícia. Also, days after his daughter's release, Silvio was held hostage by one of the kidnappers in his own home.

Thanks to the negotiations made with the participation of the governor of the state of São Paulo at that time, Geraldo Alckmin, everything was resolved.

Of the joys experienced by Silvio in the early 2000s, one of them was to see his life become the plot of the samba school Tradição, in Rio de Janeiro.

Another achievement came from Sorbonne, a renowned French university, which requested his biography for studies at the Department of Political Science.

Arlindo Silva mentions in "The Fantastic Story of Silvio Santos" the love of Silvio Santos for work. Even with a consolidated business empire, the presenter remains active doing what he loves most: communicating with his audience and doing new business.

In the book "How To Sell When Nobody's Buying", the author Dave Lakhani advises: if you are not selling, try to improve your approach. In tough times, bad salespeople give up and open opportunities for the most creative and efficient ones.

The author of "Traction", Gino Wickman, explores how successful entrepreneurs have an attractive and well-defined vision for their business. Also, they know how to communicate this message to employees.

Finally, Malcolm Gladwell, in the book "Outliers: The Story of Success", strengthens the idea that practical intelligence, namely knowing how to say and what to say, culture, opportunities, generation, and family history are more important factors than analytical intelligence (IQ) to achieve extraordinary success.

Did you like this summary of the book "A Fantástica História de Silvio Santos"?

We hope you liked to know about the life of Silvio Santos, as narrated by Arlindo Silva. Leave your opinion below, your feedback is very important!

And to know all the details you can buy the book by clicking on following image: 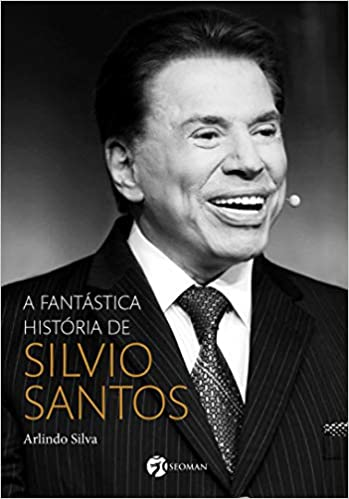