This Is Your Brain on Music - Daniel J. Levitin

Discover how music can affect you and how you can use your favorite artists as a model to change your everyday life and be a more productive person.

Have you ever found yourself mentally humming a jingle and not being able to stop at all? Has any song ever been able to change the way you were feeling? And when that song from your teeneger yearsplays, can you transport yourself back to that time?

Science explains that this is because when you listen, play or compose a song, you use almost every area of the brain known to date.

So much influence on the human mind is perceived in various forms, from capital to religion.

In the same year as the book "The Music in Your Brain" was released, record sales alone in the United States generated $30 billion a year. The sector accounted for more profit than the pharmaceutical industry.

An interesting curiosity is that the Catholic Church even banned songs that had more than one musical line simultaneously so that people would not doubt the unity of God.

Used as treatment, inspiration, or simply as entertainment, "organized sound," in the words of pioneering composer Edgard Varèse, brings answers, in this book summary, about human behavior and important reflections for everyday life.

The book “This Is Your Brain on Music”

Considered a reference in the music industry since 1950, Billboard Magazine has ranked “This Is Your Brain on Music: The Science of a Human Obsession” as one of the 15 books every music fan should read.

In its 322 pages, the book presents a series of scientific and social experiments conducted by the most skilled professionals at the intersection of psychology and neurology.

Set out in nine chapters (plus introduction and appendices), the discoveries are exemplified by great names in popular culture.

In this book, the classic rock bands of the 1960s, today's famous rappers, and even composers of symphonies from centuries ago that still endure dispense with the use of jargon that often demotivates the learning of something so important to humanity, since prehistoric times.

Who is Daniel J. Levitin?

Author of four New York Times bestselling books - among them, The Organized Mind — Daniel Levitin is a cognitive psychologist and neuroscientist. In this area, he was guided by Michael Posner, 56th most cited psychologist of the 20th century.

Levitin also dedicated himself to musical work, as a producer and sound engineer, all because of the personal connection he felt with music while wearing headphones as a child. In this area, he had contact with names more recognized by the general public.

He produced records in California for over ten years, among others for Stevie Wonder. He has worked with sound engineers for names such as Frank Sinatra and Janis Joplin, as well as accompanying recording sessions by the equally renowned Whitney Houston and Aretha Franklin.

Why should I read “This Is Your Brain on Music”?

Daniel Levitin himself stresses that, as much as it is a very specific and technical subject, he does not aim to reach only his colleagues in the music or neuroscience fields.

On the contrary, he has made a point of simplifying as much as possible all the terms that are not within the reach of the general public. Of course, even though the work is widely accessible, it will be of most benefit to professionals in the two environments involved.

One is intertwined with the other, either in ways to better understand the human brain, or to produce more attractive musical pieces using biological mechanisms.

In addition, professionals trying to add more innovation into their work environments, or creative inspiration to apply to traditional business environments, will also find valuable lessons in the experiments and discoveries in the book.

What are the key points of “This Is Your Brain on Music”?

It is normal to believe that musical aptitude is exclusive to those who are born with it. In fact, just as linguist Noam Chomsky proved that anyone can learn any language, Daniel Levitin says that we all have the same innate ability to learn any music.

In Lesotho, for example, singing and dancing are activities as common as talking or walking.

The point is, if we want to go deeper into the topic, there are some concepts that facilitate both theory and practice. However, for the purpose of understanding the theme brought here, it is enough that we know the basics of them.

Note, rhythm, tempo, reverberation are some of the fundamental sound elements, in addition to timbre, a concept so variable that it has been called everything related to sound that is neither pitch nor intensity, two other terms in this category.

When these are combined, they also give rise to tonality, melody, metrics, and harmony.

If you are a layperson, don't be alarmed by the amount of nomenclatures, it is possible to understand the discussion anyway. This is thanks to what psychology calls declarative knowledge.

For example, even without having received directed instruction, you should be able to knock on someone's door in a rhythmic way. In fact, you probably do it the most common way, which even has a name: “shave and a haircut, two bits”.

In the same way, we can naturally perceive patterns or deviations in the tonalities played by a musician.

Why does music mess with your head?

Yes, music has a natural power over us, but in addition, there are also some tricks used by composers to further affect our emotional - or nervous - system.

Short, loud sounds convey a warning signal, while long, soft sounds are soothing. This is not only for us, but also for many animals.

Knowing this enables those involved in musical productions to work on timbre and note duration to achieve the desired effect.

You can see this by listening to reggae and then heavy metal, each bringing its own motivation and aiming to win over its target audience. Even easier is to pay attention to movie soundtracks, which either make us enjoy the character's peace or distress us along with him, often without even realizing it.

The technologies involved in these increasingly evolved productions also allow the creation of sounds previously unprecedented to the human brain, increasing our interest in the product. They would be equivalent to 3D movies.

Furthermore, because it takes a path through the cerebellum, the musical experience is largely unconscious.

It activates areas in the brain that gratify, excite, and motivate. It occurs both when you predict what the next note will be by the pattern, and when the musician does the unexpected.

If you want to feel in practice how it happens in the case of one of the greatest bands in history, you can listen to the Beatles songs quoted by the author.

“Yesterday”, “I Want You” and “For No One”are some of the Brits' biggest hits, all with a touch that defies the norm and takes "the organized sound" out of robotic mode.

The good news is that even if you are not a professional in the field, you can also take advantage of this to influence your customers.

An ambient soundtrack that conveys what you want at that moment can be used in various environments, in the work environment itself, for example.

Why does life imitate art?

As if the many uses of music were not enough, it also serves as an example for many lessons applicable in very common contexts.

The author says that “memory affects the act of listening to music so profoundly that it would not be an exaggeration to say that without the former, the latter would not exist”.

In addition to using the works to strengthen and even recover memories, we can also employ in our work a resource used by instrumentalists.

When storing the large amount of songs in their repertoire and how to play them, they resort to the so-called "grouping". It consists of putting two units of information together, because it is easier to remember the whole.

In the artists' routine there are still valuable behaviors that we should naturalize. Joni Mitchell, one of the best songwriters in history, according to Rolling Stone magazine, made no effort to fit into the delimitations.

A common case in any work environment comes from Canadian Neil Young, inducted into the Rock and Roll Hall of Fame. He confessed to the writer that he does not consider himself a talented musician, his success is due to having taken advantage of the right opportunities that came his way.

Talent, inclusive, is a concept that we need to review, according to Daniel Levitin. It is common to say that this or that person is talented and therefore successful in their field, “but ultimately we only use the term retrospectively, after significant results emerge”.

What has been really proven by studies to be effective on the path to specialization, in any field, is 10,000 hours of practice.

Now, going further into Levitin's specialization, music neuroscience research teaches the following: studies based on artificial melodies distance all the findings obtained from the real world.

If you really want to know the conditions of your corporate environment or the preferences of your customers, for example, you need a personal analysis, in practice. Even the best simulation cannot generate results as good as those of the experience.

Books about the power of the human mind

In the book "Social Intelligence", psychologist Daniel Goleman brings other studies from the field of psychology, seen in a different way. With the word of other professionals in his field, he talks biologically about our brain, and how each component is present in our relationships.

Natalie Nixon, PhD in Design Management, reinforces that creative work is not exclusive to one or another privileged person. In "The Creativity Leap", she teaches tools to develop creativity and how to make it more present in your work environment.

Now that you already know the power the brain has, psychology and hypnosis professor Alberto Dell'Isola teaches how to unlock all this potential, with the book “Brilliant Minds”, also working on concepts already seen here, such as memory, creativity, and talent.

How can I be more creative and productive with the book “This Is Your Brain on Music”?

Rate the summary of “This Is Your Brain on Music”

If, until today, you felt intimidated to learn to sing or play an instrument, stop wasting the “Time” Pink Floyd sang about, and don’t be “Another Brick In The Wall”.

Did you find that text inspiring or do you think there is something that must be improved? Do like The Beatles, and “Tell Me Why” in the comments!

And, to learn more deeply about brain and musical technical concepts, besides taking many other practical examples from at least one artist or another that you, surely, know and love, click on the image below and acquire the complete work! 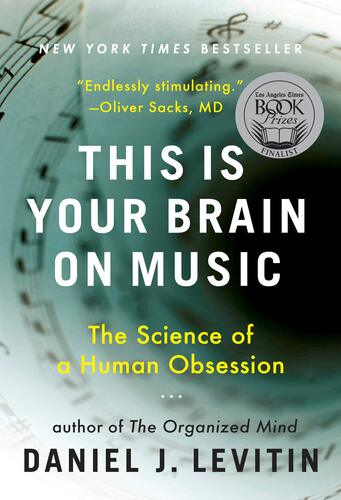