Get to know the trajectory of the most important Brazilian businessman in global retail.

You have probably shopped at Pão de Açúcar or Extra supermarkets when you've been to Brazil, or even purchased some appliances at Casas Bahia. Be aware that all these stores belong to GPA (Grupo Pão de Açúcar).

Started after the founding of the Sugar Loaf in 1948, by Portuguese immigrant Valentim dos Santos Diniz, it was managed for decades by its firstborn, Abilio Diniz, responsible for making the company the largest retailer in Brazil, with sales of BRL 64, 4 billion in 2013.

Come with us! We will tell you in more detail striking facts of the personal life and performance of this great Brazilian businessman.

The work, written by Cristiane Correa and published in the 21st of July 2015, tells the story of Brazilian businessman, Abilio Diniz, from the beginning of Pão de Açúcar until assuming the chairmanship of the BRF Board of Directors and acquiring an equity interest in Carrefour Brasil.

The 272 pages of the book are distributed in 20 chapters. In them, passages of his personal life are reported and details of all the formation and challenges faced by Grupo Pão de Açúcar.

Writer Cristiane Correa also wrote "Vicente Falconi - What Matters is a Result" and "Dream Big." Together, the three models represent their bestsellers and have sold over 600, 000 copies.

She is also a journalist and speaker specializing in business and management.

The content of the book is right for you who like great biographies that are responsible for influencing millions of people.

In addition, content is for you who seek the example of values, resilience, and determination in the corporate environment.

The highlights of the book are:

In 1929, when he was 16 years old and coming from the village of Pomares do Jarmelo, in the interior of Portugal, Valentim dos Santos Diniz landed in Brazil. The first sight that the immigrant had when he arrived was the imposing hill of Pão de Açúcar, an image that would be marked throughout his life.

"Seu" Santos, as he became known, settled in Paraíso neighborhood, in the city of São Paulo. As a clerk, in his first job, he began to show talent as a merchant and soon became a partner in the market.

It was there that he met Floripes, also of Portuguese origin and a client of the establishment, whom he married at the beginning of 1936.

A few months later, the couple's first child was born: Abilio dos Santos Diniz. Up to the age of 7, Abilio obtained, as an only child, the full attention of his parents, although his parents, who had a strict and traditional upbringing, avoided spoiling the boy.

In the following years, Arnaldo, Alcides, Vera Lucia, Sonia, and Lucilia were born. Decades later, the relationship with the brothers would reach a critical point as they entered a public dispute for control of Pão de Açúcar.

"Short, chubby and unpopular", the boy was constantly bullied at school, and getting home hurt had become routine. The solution to this was to start boxing, karate, judo, and capoeira.

Valentim dos Santos Diniz decided, after acquiring a grocery store and a bakery, to venture into another business.

He bought two properties on Brigadeiro Luis Antonio Avenue and, from them, built a small building of 2 floors. The ground floor would be dedicated to a sweet shop: the Sugar Loaf. The headquarters of the group to this day is in the same place.

Brazil, under the rule of Juscelino Kubitschek, was experiencing a phase of economic prosperity in the late 1950s. It was in this scenario that young Abilio Diniz would graduate as a business manager at FGV.

Despite all this favorable scenario, Abilio really wanted to move to the United States soon after graduation; Working at his father's pastry shop was not in question. However, a conversation with his father completely altered his plans.

"Seu" Santos stirred one of his son's most striking features to persuade him to stay: ambition. As there were still few supermarkets at the time, Abilio's father proposed opening one.

In order to expand rapidly, the Diniz family had to give up some convictions. One of them was that Pão de Açucar should own all the land on which it installed supermarkets and should build its own stores.

The network's new units came from bankrupt customer acquisitions and construction on leased land. By the end of 1960, Pão de Açúcar already had more than sixty stores in seventeen cities.

Abilio has always been adept at the idea that to grow, a rule should be followed: copy, copy, copy. It was common for the businessman to travel around Europe and the United States in search of references to the Pão de Açúcar.

"I always went to see everything I could, I always wanted to know more. The phrase 'I want to be better tomorrow than I was today' has never been rhetorical to me. I've been to almost every network in Europe. I know retail in the major regions of the United States. I even saw how networks operated in distant countries like Russia and China (...). It's hard to talk about such a business, but there must be very few people in the world who have visited as many grocery stores as me."

Overview: Crack in the family

There were few Brazilian companies that had a power struggle as big as Pão de Açúcar. It all started in 1970, when "Seu" Santos decided to donate, still in life, slices of the company to his children.

Abilio, who had owned 16% since the beginning of the supermarket activity, remained with this amount. Alcides and Arnaldo each received 8% participation. Women, following a chauvinistic logic, received 2%.

With the share distribution, space was opened for Abilio's brothers to start working at the company. "Arnaldo was more reasonable, but Alcides began to want to gain autonomy."

Alcides began to articulate for support from his mother and brothers, while Abilio became increasingly isolated. As is often the case when family and business mix, what was at stake was not just power in the company. The protagonists of the match also vied for parental attention, media exposure, and even sports performance.

"During a game at the Paulista Equestrian Society, Abilio was struck in the face that shattered his jaw and forced him to undergo plastic surgery. The author of the blow - involuntary, as he argued at the time - was Brother Alcides. Intentional or not, it is undeniable that episodes like this ended up throwing more fuel into the rivalry between the two."

The situation was only resolved after more than a decade when Alcides announced that he was willing to sell his 8% in the company.

After years of contention, signs of ostentation were everywhere. Much to Abilio's brothers.

The former headquarters of Brigadeiro Luis Antonio Avenue, where it had all started, gave way to a pharaonic Crystal Palace in the South Zone of São Paulo. The stores were built according to the most modern trends in the world.

"There was even a giant computer, like one used by NASA, that was supposed to integrate all the network's outlets - a device so complex that it never worked."

The problem is that all this greatness no longer corresponded to the company's numbers, and who benefited most from all this weakness was the French retailer, Carrefour, who after landing in Brazil with its hypermarkets in 1975, assumed the leadership in the sector.

The first to be shut down were the powerful executives of the company. According to the businessman, besides being expensive, those employees were a symbol of a company that had not worked. In just one day, almost ten CEOs were fired.

"I cut the whole first level and climbed the second. Then I told the people that I had risen to cut the third level. That simple (...). Suddenly, two echelons were eliminated. Those who stayed had to deal with a new reality of salary. How did I do it? I readjusted only for the people. For those leftovers I said I would pay the readjustment, but not at that time. First because I didn't have any money at all, and also because I wanted to make the guys really feel the need to get the business back."

However, nothing was more emblematic than the sale of the Crystal Palace to Previ, the pension fund of Banco do Brasil employees. The measure was not just the injection of $ 55 million into the Pão de Açúcar cashier, but the symbol of the end of ostentation and waste.

After rescuing the company from bankruptcy in the early 1990s, conducting its public offering, launching its securities on the New York Stock Exchange and attracting a foreign partner, Abilio Diniz was the entrepreneur of the day. A story on the cover of Veja magazine in March 2001, titled "Winner Profile" and a photo of Abilio, became legendary.

One of the most striking features of Abilio Diniz's style was what was nicknamed the Ferris wheel. The businessman had the "elect of the moment", those closest to him, with whom he made leisure and work trips, who gave power and autonomy.

To them was reserved the upper part of the Ferris wheel. However, as we all know, big wheels are not static, and who is on top one minute the next starts to descend.

In August 1999, the French retail group Casino became a minority partner of Pão de Açúcar, investing and redeeming a network of difficulties. In 2006, the French bought control of the group and announced that, from 2012, they would take over the GPA (Grupo Pão de Açúcar).

During this break, Abilio tried to break the deal and got into a fight with the group's chief, Jean-Charles Naouri, which cost about BRL 500 million. The situation was only resolved on September 6, 2013, with Abilio leaving the command of Pão de Açúcar.

Subsequently, Abilio assumed the chairmanship of BRF's board and bought 10% of Carrefour's Brazilian operation.

For John C. Maxwell, author of "Leadership Gold: Lessons I've Learned from a Lifetime of Leading" the best leaders are those who can hear. Listeners know what is happening because they are attentive.

In the book "Leadership Pipeline", Ram Charan, Stephen Drotter, and James Noel point out that functional leaders need to manage certain areas that are outside their specialty. Therefore, they must not only seek to understand this different work but also learn to value it.

In "Effective Executive" Peter F. Drucker clarifies that executives can be brilliant, imaginative, and informed, yet still inefficient. Effective executives are systematic. They work hard in the right areas and their results define them. They are knowledge workers who help the company meet its goals.

Abilio Diniz's story is certainly impressive, especially when it comes to management.

So, here are some good insights into how to run a business, and characteristics that have made the administrator successful in getting you started applying in your life:

Did you like this summary of the book "Abilio: Determined, Ambitious, Controversial"?

Also, to know the full details of this success story, you can purchase the full book by clicking on the image below: 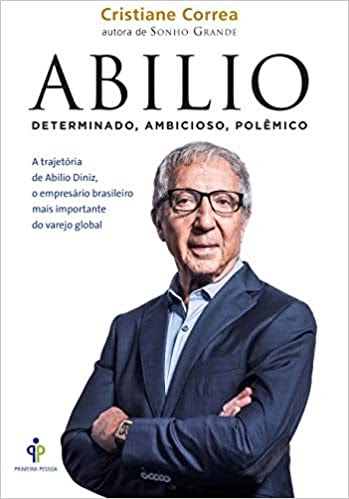