Discover the story of four women who have rocked Silicon Valley and are finally being taken out from behind the gender curtain and taking their rightful place in contemporary history.

When you think of the giants of Silicon Valley, how many female names come to mind? Probably, none. Either because you probably can't think of any or don't even know a she-wolf from Silicon Valley.

That is why Julian Guthrie wrote the book Alpha Girls: The Women Upstarts Who Took on Silicon Valley's Male Culture and Made the Deals of a Lifetime!

The book tells the addictive stories of four incredible women who have found a way to flourish and thrive in Silicon Valley, just like the bold pink dahlias blooming in a corner of Sand Hill Road.

Here is the inspiring story of Mary Jane Elmore, one of the first women in history to become a partner in a venture capital firm, Sonja Hoel, whose investments focused on making the Internet safer and more reliable, Magdalena Yeşil, a woman who loved to meddle where she didn't belong, and Theresia Gouw, who chased her dreams in Silicon Valley.

So, let's get to know the story of these revolutionary women?

The book - whose full title is "Alpha Girls: The Pioneering Women Who Battled the System and Prospered in the Male-Dominated World of Silicon Valley" - was published in April 2019.

It consists of 304 pages spread over nine parts, which divide in temporal order the events experienced by the pioneering women who helped to fund and build some of the world's most important companies.

Who is Julian Guthrie?

Julian Guthrie worked for more than 20 years as a journalist at the San Francisco Chronicle. In addition, she is the author of five nonfiction books, including Alpha Girls.

All her experience as a storyteller helped her to fund and become CEO of her own company. Currently, she runs "Alphy" a new technology platform focused on female empowerment in the field of Technology.

Why should I read “Alpha Girls”?

It is also recommended for men who have not yet realized how many women have had their names erased from history simply for being women.

What can I learn from “Alpha Girls”?

Download the "Alpha Girls" Book Summary in PDF for free

Who are the Alpha Girls?

Mary Jane Elmore was considered a serene girl during her youth. She was so determined that she became one of the first women in history to become a partner in a venture capital firm.

Sonja Hoel, a stubbornly optimistic Southerner, was the first woman to join Menlo Ventures and invest in making the Internet safer and more reliable.

Magdalena Yeşil, an Armenian who emigrated to the United States from Turkey with only $43, was one of the cofounders of Salesforce together with Marc Benioff.

Theresia Gouw, the daughter of Chinese immigrants, quit her job at Burger King and helped build some of the hottest businesses in Silicon Valley history, such as Facebook.

How did serenity help MJ Elmore?

Elmore always had a great aptitude for numbers, so he chose to study mathematics at Purdue University. During a master's class, she heard the phrase: "if you look for machismo, you won't get where you want to go.

From then on she used humor and serenity as weapons against the sexism that surrounded the Silicon Valley world.

After getting her MBA from Stanford, she started working at Institutional Venture Partners (IVP). Her focus was investments in the areas of software, communications, and computer engineering.

Despite having served as a general partner in eight IVP funds and on the Board of Directors of numerous private and public information technology companies, she has not had the same recognition as her male counterparts.

In addition, she had to juggle her personal and professional life. Her marriage, for example, was one of the greatest pains of her life.

MJ has for years been an investor in early-stage companies as well as companies that are raising expansion capital. She is currently an advisor to IVP funds, and an angel investor, and a member of Broadway Angels.

As an independent angel investor, MJ now seeks to support people and ideas that intersect with her passions of art, music, fashion, travel, food, and social media.

How have challenges been Sonja Hoel's allies?

Hoel used the following motto to guide her life: "obstacles were her allies". She started her career working at TA Associates in Boston as an Analyst, right after graduating from Harvard Business School.

Sonja started working as a venture capitalist at Menlo Ventures in 1994, and at age 29 she was promoted and became the youngest ever general partner to join Menlo Ventures.

She worked for 22 years at Menlo Ventures before starting her own firm, The Perkins Fund. Her investments have included Acme Packet, F5 Networks, and McAfee Associates.

Sonja has served on the board of more than 50 companies, with about 40 percent of the angel investments she has made being in companies started by women.

And every time she faced a challenge, she remembered her mantra. One example was when she broke off her engagement to Jon Perkins, and instead of suffering for always having her relationships destroyed, she decided to enjoy life to the fullest.

Her commitment and determination paid off big time, and in 2015, Worth magazine ranked her as one of the "100 Most Powerful People in Finance in the World."

In 2010, Hoel helped found Broadway Angels, an angel investment network invited to bring together senior women from the tech and venture investment fields.

How did Magdalena Yeşil discover that unity is strength?

Early in her professional career, Yeşil realized that individual logic is not absolute, that is, she could not rely on her brain alone to know for sure whether something was right or wrong.

Her interaction with her Stanford classmates made her realize that even the brightest students had blind spots. For this reason, she has carried into her life the idea that unity is strength, especially among women.

When she arrived in the US directly from Turkey, she had only $43. Today, she is best known as the first investor and founding board member of Salesforce, a multi-billion dollar company that ushered in the era of cloud-based computing.

In addition, she is one of the founders of Broadway Angels along with the other Alpha Girls in this summary.

Like many immigrants, Magdalena had to reconcile her origins and culture with those of the country where she lived. In addition to reconciling her work, her marriage, and her children.

How did Theresia Gouw learn to be the best person she could be?

Theresia was constantly underestimated, her father once said, "You can beat everybody in Middleport, but not in Brown. If you try to be the best, you will go crazy. Just be the best you can be."

And that is how she learned that there is no use comparing yourself to others, you are what you can be and should be.

Having started her career at Bain & Company, she joined Bain to become a founding member of Release Software, a startup she founded with her colleagues. From then on, she never stopped investing in startups and venture businesses.

Her career as a venture capitalist and entrepreneur eventually culminated at the end of her first marriage, however, she and her current husband continue to frequent her first husband's home and celebrate holidays together for the sake of their children.

Other books on Female Empowerment

In "Women Leaders and Entrepreneurs", Silvina Ana Ramal brings several examples of how women sabotage their own achievements, from not accepting compliments to attributing all their great achievements to luck.

Finally, in the book "Powerful Women Have Ambition", Heather McGregor teaches how to become a powerful woman from foolproof, practical, simple, and effective tips.

Right, but how can I be an Alpha Girl?

Did you enjoy reading about female empowerment? Then how about evaluating our summary?

Your opinion is essential for us to create more and more interesting summaries for you!

Enjoyed the summary and want to read the whole book? Get it now by clicking on the image below: 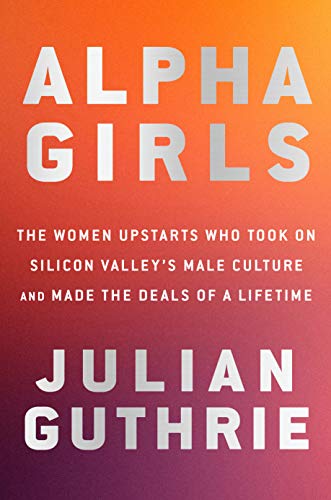