An Autobiography: The Story of My Experiments with Truth - Mohandas Gandhi

Get inspired by one of the most respected and fascinating souls of our time, Gandhi, with his book An Autobiography: The Story of My Experiments with Truth.

The independence of India was a long and difficult process, led by the activist Mohandas Gandhi. In his book "An Autobiography: My Life and My Experiences with the Truth", he narrates his trajectory in the fight against English colonialism and the dissemination of his philosophy, known as "Satyagraha".

Considered the father of India and respected around the world, Gandhi inspires several pacifist movements in different countries, and thanks to his achievements, the "International Day of Non-Violence" is celebrated on his birthday.

Are you curious to know more about Gandhi and his accomplishments? Come with us!

About the book "An Autobiography: The Story of My Experiments with Truth"

The book "An Autobiography: The Story of My Experiments with Truth" was first published in 1927.

Gandhi explores the spiritual, mental, and physical dimensions studied and lived by him. Also, he brings his principles of nonviolence, truth, and concern for others.

The book is divided into five parts, with a total of 440 pages. He is very objective in his topics and most of them are short and performed in chronological order.

About the author Mohandas K. Gandhi

Mohandas Karamchand Gandhi was born in 1869 in the Indian city of Porbandar. He is also known as Mahatma Gandhi, an honorific that means great soul.

He studied law and became a spiritual and pacifist leader in India.

Gandhi also wrote the books "Hind Swaraj or Indian Home Rule", "India of my dreams", "Satyagraha in South Africa", among others.

Each overview of this Pocketbook will tell you more about Gandhi, so keep reading.

"An Autobiography: The Story of My Experiments with Truth" is for the ones who want to get inspired by great leaders, responsible for influencing millions of people and changing the world.

Also, it is for people who want to know more about values, commitment, love, and determination. The book has examples of all the struggles and achievements marked by leadership and the non-violence resistance of Mohandas Gandhi.

Main ideas of the book "An Autobiography: The Story of My Experiments with Truth"

Download the "An Autobiography: The Story of My Experiments with Truth" Book Summary in PDF for free

In this first part of "An Autobiography: The Story of My Experiments with Truth", Gandhi tells about his birth, childhood, religion, marriage, and all the experiences and tragedies that occurred during this period.

Gandhi was born on October 2, 1869, in Porbandar, an Indian city. As a child, he was totally influenced by the practices of his religious-political father and his devoted mother.

He started going to school at age 7, and he was always regarded as a very shy and average student. Also, he was never willing to cheat in front of his friends.

When he turned 13, his parents decided that he should marry, a practice that wasn't totally supported by him. In addition, he recounts some tragedies he encountered in his teens.

When his father died, a friend of the family suggested that Gandhi should study in England. To do so, he had to make serious promises to his mother, because her greatest concern was that he would lose his culture and start eating meat, drinking alcohol, and sleeping with other women.

With that, in 1888 he went to England to study law. He tried to adapt to the new culture, but it was complicated. So, he preferred to live a life of intense studies and humility. After 3 years of study, he passed the exams in order to be able to practice law and returned to India.

Upon returning to India, Gandhi discovered that his mother had died. During the same period, he started his professional life.

He began working in Bombay at the Supreme Court. There he gained experience and deepened his studies in law. However, his shyness got in the way of his work, driving him back to Rajkot, where he opened his own office.

His older brother was always willing to solve his problems and help him as much as possible. Thus, he had a major influence on the transfer of Gandhi to South Africa, where he got the position of a lawyer.

During his time in South Africa, Gandhi suffered from various discriminations because of his skin color.

In "An Autobiography: The Story of My Experiments with Truth", he narrates some of these events, like when he was kicked out of the train, and when he was invited to dine in his room to not offend the guests in the hotel. In those moments, he said that he always discussed the situation, but without violence.

During this experience, he gained confidence in himself and acquired great knowledge in the legal field, leading him to help found the Natal Indian Congress, which supported the Indian community to come together as a political force. Gandhi also began to study Christianity.

Soon after, he returned to India with the purpose of picking up his wife and two daughters and taking them to South Africa, where he continued his work as an activist.

When he arrived at the port of South Africa, the white citizens were furious with him and attacked him, accusing him of false imputations. But Gandhi proved his innocence to the press and said he did not want to sue anyone who attacked him.

Gandhi increased his public work with the Indian community there, and each day he developed an affection for cooperation and simplicity. During the Boer War, he honed these qualities and created an ambulance corps to take the wounded.

After the war, Mohandas Gandhi returned to India through a long excursion. His goal was to understand the difficulties of third-class passengers. So he decided to leave his family in India and returned to South Africa to solve the main problems.

Overview: The Beginning of the Fight

On his return, South Africa was experiencing an epidemic of racial discrimination and the government laws put Indians in a difficult situation.

According to Gandhi, he was heavily influenced by a book called "Unto This Last", and the teachings of it changed his life. At the same time, Gandhi founded the "Phoenix Settlement", a farm where he would live with his supporters and later became a small village.

As he explains in the book "An Autobiography: The Story of My Experiments with Truth", in 1906, the British government declared war on the Zulus, and Gandhi was there again. He worked with his ambulance corps, with the aim of helping to transport and care for the innocent and wounded.

When the war was coming to an end, Gandhi's next step was to live the lives of the poorest people, practicing fasting and eating a restricted diet that contained only fruit.

Even when he fell ill, Gandhi explains that he did not abandon vegetarianism and kept the vow he made to his mother.

During all this time in Africa, Gandhi developed what would be called "Satyagraha". It translates as "holding onto truth" and refers to non-violent protests and resistances.

Overview: The Peak of His Political Power

In 1914, Gandhi returned to India and made major changes there: he opened primary schools in six villages and improved their sanitary conditions. He also shared the "Satyagraha" in India, that is, the non-violent civil disobedience, and obtained expressive results, increasing his popularity.

Despite this, many peaceful Indian civilians were killed by the British, but this made the movement stronger.

With that, Gandhi's real entry into Congressional politics took place, leading to the organization of a new constitution that boosted the country's complete independence.

For Gandhi, one of the ways to achieve independence is by fighting poverty and manufacturing products that India was dependent on.

At the end of "An Autobiography: The Story of My Experiments with Truth", Gandhi says that his achievements in Congress still left history under construction, with nothing final.

Now, history confirms that Indian independence has been successful and has influenced movements for egalitarian rights around the world.

In the book "Unshakeable", author Tony Robbins says you need to give yourself: give your attention and your time. Making contributions is what brings meaning to the lives of many people. This is perfectly understood in Gandhi's life.

For the author of the "Psychology of Selling", Brian Tracy, successful people enhance their inner dialogue with optimistic and confident phrases. For example, if you repeat the phrase "I like myself" throughout the day, your self-esteem will certainly increase. You can clearly see this behavior in Gandhi, through his faith, love, forgiveness and all his positive energies.

Finally, a history with a trajectory very similar to Gandhi's is that of Nelson Mandela, reported in the book "Long Walk to Freedom". Both had similar traits such as admirable leadership, the struggle for civil rights, and commitment. Also, both faced hateful enemies, but Mandela diverged from Gandhi by using violence and weapons in his fight.

During the work of Mohandas K. Gandhi, "Autobiography: My Life and My Experiences with the Truth", he indirectly presents us with several ways of seeing obstacles and how to exercise leadership based on moral values:

Finally, Gandhi proves that the above characteristics are essential to win, even in an uneven world!

Did you like this summary of the book "An Autobiography: The Story of My Experiments with Truth"?

We hope you enjoyed our summary and that you can apply the teachings of Mohandas Gandhi in your life. Leave your opinion in the comments, your feedback is very important to us.

Also, the full edition is available for purchase below: 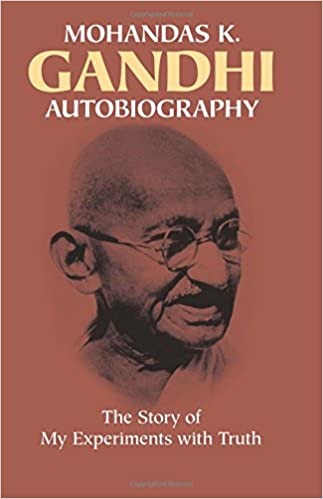