The Art of the Deal - Donald Trump

To develop the art of negotiation, you have to learn to think big, inspiring yourself by Donald Trump to achieve success and make money through the smart deals.

In the "Art of the Deal", Donald Trump presents his conduct, business, and how he leads his life. However, even though he is a free spirit, he obeys the rules of the game.

Years before running for president, Trump wrote this book, which shows how he became a billionaire, revealing how he negotiated some of his biggest real estate deals and how he does branding, marketing, and advertising.

So, keep going with us because you are about to learn how to improve your negotiation skills, business, and your life.

About the book "The Art of the Deal"

Originally published in 1987, "Trump: The Art of the Deal," written by Donald Trump, brings lessons and reflections that, if applied today, may lead you to take over the chairmanship of your life, your business, and why not, Of your country.

The book has 384 pages that are divided into 12 chapters, being one of the biggest business bestsellers of all time written by the current US president.

About the author Donald Trump

Donald Trump is the very concept of the success story, constantly setting standards of excellence while increasing its activities in real estate, sports, and entertainment.

Trump also owns other New York Times bestselling books, such as "Big Again", "Think Like a Billionaire", "We Want You to be Rich", "How to Get Rich", and "Surviving at The Top".

In November 2016, going against all expectations and polls, he was elected President of the United States.

Here you will get an overview of the great deals Donald Trump did in the 1980s, building his empire, including the Trump Tower.

Regardless, whether you love or hate Trump, with you want to learn a lot about sales, advertising, and trading, this is the book for you!

Main ideas of the book "The Art of the Deal"

Overview: Talk to people, then trust your instincts

In business, Donald Trump does not believe in sophisticated marketing research, committees, or outside consultants. When he is researching a new property, he talks to the people who live in the neighborhood.

By asking many questions, he develops a hunch about how good the property, the neighborhood, and the city are. This is how he makes decisions about his investments.

According to him in "The Art of the Deal", "committees are what insecure people create to delay difficult decisions"

People say they always saw Trump talking to the workers who built their buildings. And from these conversations, he had an idea of what the American people wanted and trusted their instincts to lead him to the White House.

Trump doesn't work a million times harder than you. He just thinks bigger, which means he does different types of work.

For example, when Trump was 30, he found a large building for sale called Swifton. It was a building with 1, 200 units.

Together with his father, they signed a $6 million mortgage for the building.

Most people would feel totally overwhelmed by having to manage 1200 apartments, but Trump and his father saw it differently.

Trump says it takes almost as much effort to manage 1200 or 50 tenants, but with 1200 you can make a lot more money. So, for him, it's a waste of time concentrating a lot of energy on the project if it were small.

Thinking big can also help when you are selling and marketing your product. Trump likes to use words like "the best, tremendous and world-class" when talking about his projects.

And there's a reason why Apple marketing is always talking about how its new product is the thinnest iPhone ever or the lightest laptop.

So, think big whenever you can. Be number one in your business category.

To win negotiations and make good deals, a good negotiator must have influence.

Trump says that one must "have something the other person wants". But first, you need to find out what she wants.

For example, he says in "The Art of the Deal" that he once wanted to open a casino with the Holiday Inn. He already had a place for the casino, made projects, and started construction. Now he wanted the Holiday Inn to help finalize the project.

But what did the Holiday Inn want? They wanted to open a casino, but they didn't want to start from scratch. They wanted to partner with someone who was in the final stages of building a casino. That would save a lot of money, time, and energy.

The Holiday Inn believed that Trump had what he wanted: a casino project that would soon be completed. But the truth was that Trump had just begun construction. Not much progress yet.

In this situation, Trump knew he needed to make Holiday Inn executives continue to believe the project was underway. That was its influence.

So, he called the construction supervisor and said to make the construction site look the busiest in the world. To bring more trucks and more workers and make them do something. Anything as long as the place looked very busy when Holiday Inn executives stopped by to visit.

And that's exactly what happened. Executives saw all the busy workers and were pleased with all the activity going on. So the deal was made.

According to Trump, their "influence came from confirming an impression they were already predisposed to believe."

Overview: First talk about your strengths and then highlight the weaknesses on the other side.

Trump has a spontaneous pace when selling or trading. His negotiation strategy is firstly, he sells himself and talks about the benefits of doing business with him. Then he takes a step back and mentions the weak parts of the other person's product or offer.

Trump followed this pattern by buying a large construction site near the edge of New York.

First, he sold himself by talking about his past accomplishments and assuring the landowner that he could approve the deal by all the city officials, lawyers, and bankers.

This gives the landowner a feeling that Trump is a respectable guy with whom he can do business.

Then Trump steps back, talking about all the negative and weak points about the place of interest.

He mentioned that New York was in recession and most people were not buying real estate. He also talked about how difficult it would be to get the right building permits for such a large piece of land in the middle of the city.

Finally, the current president made the purchase of the land for a value below the initially specified.

In the "Art of the Deal" he puts it, "If you want to buy something, it's obviously in your best interest to convince the seller that what he has is not worth much."

Overview: Often what separates success from failure is simply the insistence

One time Donald Trump wanted to buy an old building in New York. So he invited the building owner for lunch. After talking, the owner said there was no way to sell the building.

Instead of giving up, Trump texted thanking the owner for accepting his invitation. A few months later, he wrote another asking if the building owner had changed his mind. There was no answer. A few more months passed and he wrote another message. No reply. Then another one.

In "The Art of the Deal" he presents a reason for doing this: First because he really wanted to buy the building. Second, because he believed that pure persistence alone often separates success and failure.

Three years later, the building owning company was in financial trouble and management changed. That meant a new owner. And the new owner was open to selling the building.

Eventually, Trump got a deal to buy the building, which eventually broke down to build the Trump Tower.

In "Ignore Everybody", author Hugh MacLeod says your business plan must be as original and innovative as your idea, or even more. It's no use trying to do the same as many others and hoping to stand out somehow.

According to Dr. Robert B. Caldini, in his book "Influence: Science and Practice" everyone uses the influence and is a target for it. He explains that persuasion practitioners know exactly what they want and where to go, so they use six psychological principles to achieve their goals, which are covered in his book.

Author Mitch Anthony, in his book "Selling with Emotional Intelligence", says that many negotiators make the mistake of trying to reach the best deal by thinking only of their side. They fail to consider the long-term impact that business can have on customer relationships.

Some people may hate Trump because of his policy. But there is no denying that he is a fierce competitor. He wants to be the winner and often is, surviving at the top of his business. He became a billionaire in real estate, became famous in reality TV, and then shocked everyone into becoming president of the United States.

For Trump, "Money has never been great motivation, except as a way of maintaining status. The real thrill is in playing the game."

In this "The Art of the Deal", Trump shared some ideas about thinking big, trusting your instincts, negotiating, selling products, and more.

Did you like this summary of the book "The Art of the Deal"?

If you enjoyed Donald Trump's work, "Trump: The Art of the Deal," leave your feedback to let us know your opinion and always offer the best to you! 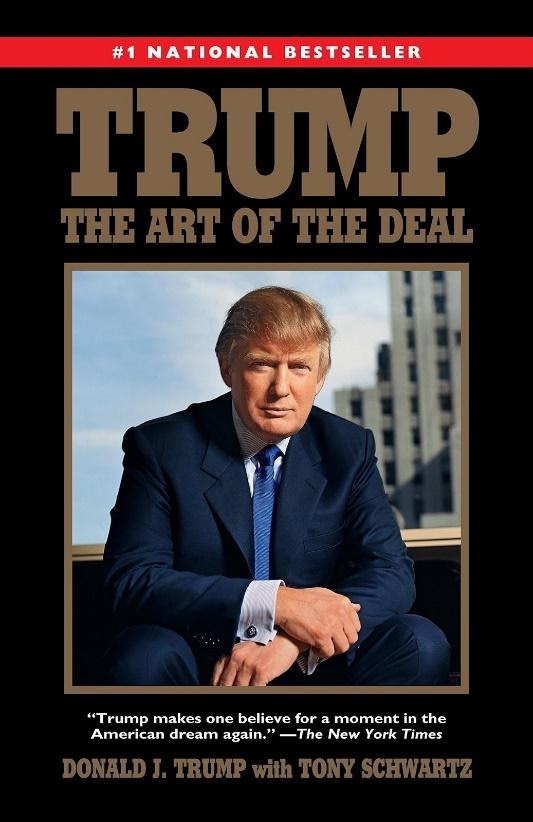 The content presented above reflects the vision and critical analysis of our writing team, respecting the fundamentals of intellectual property in Brazil (article 8, item I).
No part of the book is being copied. They are unique and exclusive content, always giving credit to the authors and indicating the link to purchase the complete work. PocketBook4You respects the copyright code in accordance with Brazilian law, Law 9.610 / 98.
This content is the exclusive property of PocketBook4You and is protected by Copyright Law in its articles 46, I, (a) and its article 47, because it is not reproduction and do not imply any discredit, on the contrary, the moral right is protected and, as noted earlier, the reader receives a link to acquire the work. Reproduction of this material without permission of the company is prohibited.

Have you ever had difficulty creating an Internet browsing page? Learn from this...

Learn the five steps that promise to help you to escape from the red ocean and c...

Find out here how the use of Big Data and IoT can be beneficial to help you over...