Find out how came the rise and fall of Theranos, Elizabeth Holmes’ startup that fooled Silicon Valley with a technology that promised to revolutionize the medical industry.

Have you heard of the startup Theranos, responsible for one of Silicon Valley’s biggest scandals? The company, which was once valued at $9 billion, promised to deliver technology that would revolutionize healthcare, but presented false data and manipulated results, misleading its investors.

The well-known journalist John Carreyrou narrates in his best-selling work, “Bad Blood”, the story of the rise and fall of the company, which worked with biotechnology. Its founder and CEO Elizabeth Holmes, was found guilty – in January 2022 – and could face up to 20 years in prison on fraud charges.

Do you want to know how it all happened? Then continue reading our PocketBook!

“Bad Blood”, released in 2019, is written by John Carreyrou, which tells the complete story of Elizabeth Holmes, from her childhood to the collapse of the Theranos company.

The book was based on interviews with over 150 people. He inspired the documentary film “The Inventor: out for blood in Silicon Valley” and the movie “Bad Blood” released in 2022, in which Elizabeth is played by Jennifer Lawrence.

Who is John Carreyrou?

John Carreyrou is a French-American reporter who worked for about 20 years for the Wall Street Journal. A two-time Pulitzer Prize winner, John has received several awards for the publication of “Bad Blood”, including: George Polk, Gerald Loeb, and Barlett & Steele. He is currently featured on the “Three Uncanny Four” podcast.

Carreyrou informed via his Twitter handle that he would be covering the Elizabeth Holmes trial via the podcast “Bad Blood: The Final Chapter”, which is available on all major platforms.

Why should I read “Bad Blood”?

According to Yashar Ali of New York Magazine, Theranos’ story can be the biggest corporate fraud since Enron. But it also shows how many powerful men can be fooled by an impostor.

If you want to know how Theranos went from $9 billion to bankrupt, understand the Silicon Valley culture, and know what never to do, this work from John Carreyrou is made for you!

What can I learn from “Bad Blood”?

How the startup’s legal team threatened to sue employees who, because they discovered the fraud, resigned.

Download the "Bad Blood" Book Summary in PDF for free

How did she develop a deliberate life?

Elizabeth Anne Holmes, as a child, wanted to be a successful businesswoman.

Then, a family member asked her if she wouldn’t like to be president. The girl clearly stated she wouldn’t want that, instead, the president would marry her because she would have billions of dollars.

In a relative’s view, who watched the scene, these were not meaningless words from a child. Elizabeth said them with the utmost determination and honesty.

In addition, her parents fed her ambition. Christian and Noel Holmes placed high expectations on their daughter, who carried the strong ties of a distinctive family history.

Elizabeth said in an interview that she had grown up listening to stories of grandeur and what happens to people who do not live deliberately.

During her High School, Elizabeth rigorously pursued her studies, staying up late to study, becoming an excellent student. And so, it established a standard of living: little sleep and overwork.

By the time to choose a college to approach, Holmes focused her attention on Stanford. It was the expected choice for a talented person interested in computers and science who wanted to become entrepreneurial.

Elizabeth was accepted at Stanford in 2002 in a President’s Scholar Scholarship, a highlight given to top students, which provided $ 3,000 for them to pursue intellectual interests of their choice.

According to the work “Bad Blood”, Holmes thought that to truly make a mark on the world, one had to accomplish something that would bring the greater good. Biotechnology afforded a chance for such achievement, as well as for turning into a billionaire. So she decided to study chemical engineering.

It was through this story that Holmes met Professor Channing Robertson and the doctoral student Shaunak Roy, who worked in Robertson’s research lab.

In 2003, Elizabeth did a summer internship in Singapore, a city-state that was having difficulty because of a spreading disease called Acute Respiratory Syndrome, or SARS.

She spent the entire summer testing her patient samples using outdated methods without technology. This experience made it clear to her that there should be more efficient ways to perform exams.

Returning from the internship, Elizabeth Holmes spent five straight days at her computer, sleeping only a few hours a day. She finally created a patent for an arm patch that was capable of both diagnosing and treating medical conditions.

When she returned to her sophomore year of college, she presented her patent to Robertson and Shaunak.

According to Robertson, she could take scientific engineering concepts and synthesize them in all imaginable ways. Among the tens of thousands of students, he had never met anyone like this. That’s why he encouraged her to go ahead and follow her dream.

Shaunak was a little more disbelieving. The idea she was showing seemed to him somewhat unlikely. But he got carried away by Robertson’s excitement and the desire to launch a startup.

After completing his doctorate in 2004, Shaunak joined the startup as a first employee. Robertson, in turn, came to the board as a consultant.

Elizabeth started her company under the name of “Real-Time Cures”. She later changed her name to “Theranos”, which is a combination of the words “therapy” and “diagnosis”.

How did it become the most popular startup in the Valley?

To get the necessary funds, Elizabeth used the influences and connections that her family had, earning a few million dollars. But not everyone bought the idea.

In front of five partners in this company, Elizabeth spoke eloquently about the potential that her technology had to change humanity. However, potential investors were interested in the technical details of how Theranos’s product differed from one that had already been developed and marketed by a company called Abaxis.

Unable to answer the questions, Elizabeth got up and left the meeting, gasping and visibly nervous.

MedVenture was not the only company to reject Theranos’ ideas. But that didn’t stop her from making millions of dollars by the end of 2004.

Finally, the idea of the patch was completely discarded and the new product was similar to devices that measure blood glucose levels. The intention was for the device to be portable, and Elizabeth wanted it to be able to analyze many substances, which would make the equipment more complex and larger.

The patient would need to poke it’s finger to have a small blood sample collected and then place it in a cartridge called a “reader”.

Holmes wanted to place the cartridges and readers in the patients’ house, so they could perform the exams regularly. An antenna on the reader would send the results to a computer through a central server.

In this way, doctors would be able to adjust the medication quickly, it would not be necessary for the patient to go to the laboratory, perform the collection, wait for the result and take it in the next appointment.

The book “Bad Blood” also says that, a year and a half after Shaunak joined Theranos in late 2005, the company had a prototype, Theranos 1.0, and over 20 employees. The startup was starting to get attention.

At Christmas, Elizabeth e-mailed her employees wishing “great holidays”. She also mentioned the interview given to Red Herring, a technology magazine. At the end of the email, she gave it a toast to the most popular startup in the Valley.

How did the scam come to an end?

John Carreyrou tells that he sought to learn more about Theranos because of an article published by the New Yorker about the young Holmes.

He contacted Alan Beam, the company’s former laboratory director, who revealed that the equipment did not work. John continued to seek out other employees of the company until one of them stated that someone could end up dying because of its fraudulent conduct.

After managing to prove with the help of doctors the alteration of the exams made by the technology developed by Holmes, the author tried to contact the young billionaire. In addition to being unsuccessful, he was heavily coerced by his lawyers not to reveal anything he had discovered.

On October 15, 2015, the headline “A Prized Startup’s Struggles” was on the front page of the WSJ. The uproar caused by the reports caused many people who were suspicious of the company’s extreme secrecy to contact the newspaper. According to the book, Holmes promised to reveal everything behind her technology, but the published study had several flaws.

Because of these accusations, the company’s value plummeted. Many shareholders lost thousands of dollars and Theranos' credibility was badly shaken.

In 2018, the U.S. Securities and Exchange Commission convicted Theranos, Holmes and Balwani of conducting “an elaborate fraud years ago”.

Books about persuasion and strategy

In “Influence: Science and Practice”, Robert Cialdini says that persuasion practitioners know exactly what they want and where to reach, for achieving their goals they use psychological principles.

Psychologist Carol Dweck’s book “Mindset” discusses how our beliefs shape our behavior and growth. While mindsets produce definitive worldviews, human beings can be taught to respond in different ways, such as facing challenges and thinking otherwise.

Finally, in the book “Dream Big”, the author Cristiane Correa analises the idea of personal strategic planning highlighting the importance of keeping a process of continuous improvement to make a business work.

How can I apply the ideas from “Bad Blood”?

By positioning Theranos as a technology company in the heart of the Valley, Holmes has channeled the “lie until it’s true” culture, going to extremes to cover its fraud.

Seen as an authoritarian leader who would do what she wanted without regard to others’ opinions, Holmes isolated herself completely. Thus, even those people willing to help the company were silenced in the process.

You can learn from this story how not to act like a leader and how not to handle business. Always have a prototype of the project to be developed and the main thing: be honest with stakeholders.

If you enjoyed John Carreyrou's work, “Bad Blood”, please leave your feedback to let us know your opinion and always offer the best to you!

If you want to look deeper into the content you can enjoy buying the book by clicking on the image below: 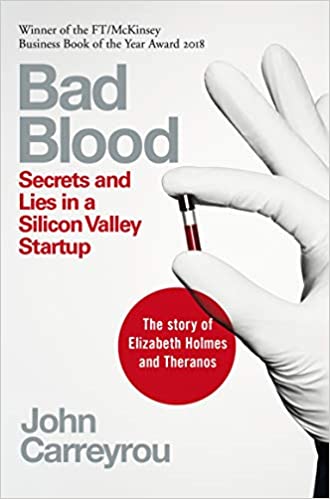