Understand why Bitcoin has revolutionized the way we conduct economic transactions between two individuals without the need for a third party. Learn about the technology behind digital currency and its impacts on our lives.

The purpose of the author João Guilherme Lyra, in his book "Blockchain and Decentralized Organizations", is to clarify the operation of the technology behind Bitcoin, the blockchain, and talk about the new organizational forms that come with it.

Bitcoin is a decentralized cryptocurrency, meaning it does not require third parties to function. This means that you do not need banks, large corporations or governments to move your money.

Bitcoin emerged over ten years ago (2008), based on a decentralized network, created by Satoshi Nakamoto, named blockchain.

Going back in time, in the 2008 subprime crisis, far from the highlights of the economic news, Satoshi Nakamoto published an article that had a new proposal for economic transfers over the internet.

This article was named "Bitcoin: A Peer-to-Peer Electronic Cash System". The proposal was to eliminate a "trusted third party" who had the role of validating operations.

The blockchain was what allowed the revolution of the bitcoin value transfer model. It's worth mentioning that these digital assets enable new social arrangements and are capable of generating economic value for society.

Are you curious? So continue reading our summary and be surprised at how this innovative technology works.

About the book "Blockchain and Decentralized Organizations"

"Blockchain and Decentralized Organizations", launched in 2019 and written by João Guilherme Lyra, is a book that seeks to clarify how blockchain technology works.

The work has 128 pages that are divided into seven chapters, which will make you understand why you no longer need another reliable individual to perform the transactions you make with your money.

About the author João Guilherme Lyra

João Guilherme Lyra is an administrator, postgraduate in Management and Marketing from ESPM. He also holds a master's degree in Engineering from UFF, with an emphasis on Management System. And also, professional experience in university teaching and decentralized organizations.

The book "Blockchain and Decentralized Organizations" it is recommended for professionals and students from a wide range of fields, including entrepreneurs, economists, administrators, lawyers, programmers and people who want to know more about cryptocurrencies.

Main ideas of the book "Blockchain and Decentralized Organizations"

The main ideas fostered in this book are:

One of the main highlights for the Bitcoin system goes to solving the "Byzantine Generals Problem", which was an unsolved problem, even before Nakamoto's proposal.

If we look at the internet environment, that is exactly what happens. The internet is insecure and treacherous.

Now we can understand Nakamoto's solution:

Overview: The components of blockchains

A blockchain has several components, including:

Although many, these are not all components of blockchains. In this summary of "Blockchain and Decentralised Organizations", we'll talk about just a few:

Blockchain, or block chain, is a well-defined block union, where everyone guarantees the validity of transactions. This defines the antecedents of asset control and provides an invariable time calculation for operations.

"The most important fact is that transactions are propagated, validated and recognized between nodes of the system."

Now if you want to know more about investing, we have "The Zurich Axioms: The Rules of Risk and Reward Used by Generations of Swiss Bankers". Max Gunther teaches the twelve rules, "axioms", which were used by Swiss investors in various areas. These rules are a summary of how the Swiss have become the smartest gamblers in the world.

"The Intelligent Investor" is a classic business book, hailed as "by far the best investment book ever written" by one of the richest guys in the world, Warren Buffet. The author Benjamin Graham explains how to invest in stocks and the characteristics of an investor who knows how to play the stock market: discipline and consistency.

Finally, Fernando Ulrich, in his book "Bitcoin: The Digital Age Currency", shows how digital currencies are a new way to generate income, increase profitability and the advantages that a free and independent currency can offer its interlocutors.

The annual survey examining trust in entities in 28 countries, Edelman Trust Barometer, shows that 57% of the population does not believe in governments, but this is the lowest rate among all the institutions evaluated.

Looking specifically at Brazil, the index reveals that 72% of people do not trust the government. On the other hand, most of them credit the government with driving economic progress.

According to Kenneth Arrow:

"Almost every business transaction has an element of trust in it; certainly, any transaction conducted over a period of time. It can be plausibly argued that much of the economic backwardness in the world can be explained by a lack of mutual trust."

Believing in new organizations and trusting that you can have shared trust, that you can control the management of your capital, is certainly a radical transformation in many people's minds.

Finally, the author João Guilherme Lyra in his book "Blockchain and Decentralized Organizations" invites us:

"Set your own clock to build a new time, because crypto-space is a collective and distributed construction!"

Did you like this summary of the book "Blockchain and Decentralized Organizations"?

What did you think of João Guilherme Lyra's work, "Blockchain and Decentralized Organizations"? Leave your feedback, so we can always offer the best content for you!

In addition, to learn more about the content, get the book in its full version by clicking on the image below: 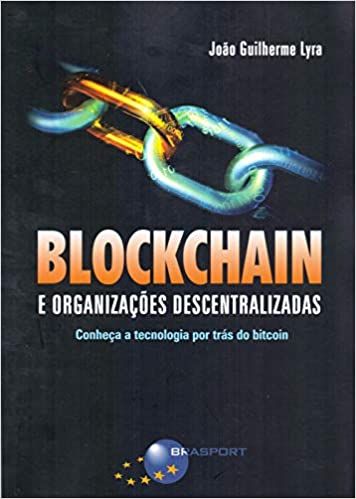