Learn here the formula that distinguishes business success from failure!

Over a six-year period, authors Jim Collins and Jerry I. Porras reviewed 18 truly exceptional and long lasting companies that have lived and maintained the standard of excellence (the average founding year for these 18 companies was 1897) to write the book "Built to Last".

In this book, they present the results of this research and show some myths from the corporate world that have been overturned with the evidence found.

In this summary, let's take a closer look at some of these myths destroyed by the authors. Keep reading to know more about it!

About the book "Built to Last"

Originally published in 1994, "Built to Last" brings in 11 chapters all the explanation of how the research was conducted by the authors and, in addition, presents their conclusions about the results found.

The book presents several examples of situations in which visionary companies differed from those in the comparison group, showing in practice how certain myths bring wrong ideas.

At the end of the book, the authors answer the most common questions they receive during seminars, lectures and classes.

Since then, more than one million copies have been sold and translated into 16 languages.

About the authors Jim Collins and Jerry I. Porras

Jim Collins is the author and co-author of six books that, in total, have sold more than 10 million copies around the world. Among them are the successes:

Nowadays, Collins is currently giving lectures and consulting to executives from the corporate and social sectors.

Thus, we worked with the improvement of varieties of companies and executives through his courses of leadership, interpersonal dynamic and organizational development.

This content is essential for entrepreneurs at all levels, leaders from different fields and people who want to know how the world's top companies can stand firm and strong even after so much time.

According to the authors, this book should be read by everyone as they believe that these companies have much to teach with their concepts and management principles.

Main ideas of the book "Built to Last"

Download the "Built to Last" Book Summary in PDF for free

Overview: Myth 1 - It Takes a Great Idea to Create a Great Company

Many entrepreneurs end up wasting a lot of time waiting for a great and revolutionary idea to emerge that will make their company reach the excellence.

However, this is not the way it works in practice, because a visionary idea doesn't arise from one moment to another.

Collins explains that the best companies are much bigger than just a great idea. He cites the examples of Sony and HP (Hewlett-Packard), which were created before its founders defined in what market they would act.

In addition, in their research, the authors found that most visionary companies did not start with a revolutionary idea that made them succeed right at the beginning. In fact, they had a slow start and, during the time, managed to dominate their markets.

Many companies are very concerned about having a perfect, inspiring and charismatic leader.

The book "Built to Last" states that some researches shown that it's not necessary such a person to lead the organization to success. The authors explain that these may be characteristics of a great leader, but they aren't the only ones.

This concept of leadership is explained by Collins in the book "Good to Great" where he highlights what he calls "Level 5 Leadership", which means humble and willing leaders who always put the company's purpose first.

According to them, companies like 3M, P&G, Sony, Boeing, and HP are examples of visionary organizations that were created without relying on a visionary and charismatic leader.

The book "Built to Last" says that different from popular belief, maximizing profits was not the driving force of some visionary companies.

Jim and Jerry explains in the book that those companies have a diverse variety of goals - and making money is just one of them, not necessarily the main one.

In fact, what drives and serves as a growth engine is a central ideology well-established in the company, based on its purpose and vision.

The paradox lies in the fact that visionary companies still profit far more than those focused only in earning money.

The authors Jim Collins and Jerry I. Porras explain that what people call "right and wrong" values don't exist. Two companies may be totally ideologically opposed and still be visionary, according to the research classification.

The main point is not in the content of the company's vision, but in the way employees believe in it and how the organization experiences and expresses that vision in everything it does.

Overview: Myth 5 - Change is the Only Constant

The text says that the thought of a change being the only constant couldn't be more wrong.

According to the authors Jym Collins and Jerry I. Porras, the visionary companies always try to preserve their ideology. In some cases of the study, the values remained intact for more than a century.

Maintaining the purpose of the organization over time is important for it to always serve as a security and a guideline that indicates where the company should aim.

The great differential of the most successful companies is their ability to monitor progress and change, but always preserving their purpose and core values.

Overview: Myth 6 - The Best Companies are Great Places to Work for Everyone

As explained by the authors, visionary companies have essential purpose and values that must be spread and shared by everyone in the company. That's why, it is so important that employees understand and agree with this vision.

This causes a dichotomy: either you fit into the company's philosophy and flourish inside it or you will be "eliminated" to give the place to someone who shares the purpose of the company.

The best companies do not afford to have people out of alignment with their ideology in their workforce.

This happens because these people will hardly be able to motivate themselves and improve at the same time as the company, preventing all parties from reaching the standard of excellence.

That's the reason why we can say that best companies are not always the best place to work for everyone.

Throughout the study, the authors identified only four occasions when visionary companies look for an outsider CEO, which were held in only two companies.

"Home-made" leaders were essential for excellent companies to achieve their high performance, much because they already know and share the purpose of the company, allowing them to be able to perpetuate it.

This shows the importance of establishing a continuous flow of training and leadership inside the organization.

Overview: Myth 8 - The Most Successful Companies Focus on Overcoming the Competition

In fact, the focus of visionary companies lies in overcoming itself. Be better than the competitors ends up being a consequence of this way of behaving.

Leaders continually ask themselves about how can them improve for tomorrow to do better than today.

The book "Built to Last" explains that with the research data the authors could notice that some of the best companies have been doing themselves this question every day for more than 150 years.

The main idea of this principle is that the best companies are never satisfied, no matter how they are better than their competitors, because they think in self-improvement everyday.

In the book "Zero to One" the author Peter Thiel gives the tip: when there's competition the companies don't possess power in the market. That's why they need to sell their products by the market price or they will be overcomed by the competitors.

The author of "Traction", Gino Wickman talks about of how the entrepreneurs of success have a attractive and well-defined vision for their business. Thus, they know how to communicate with the employees and perpetuate this vision.

At the end of the book, the authors present other tips for ideas to be applied in the real world:

Did you like this summary of the book "Built to Last"?

Did you like this content? Leave your feedback in the comments, you opinion is very important to us!

To know the complete work, you can buy it by clicking on the image below: 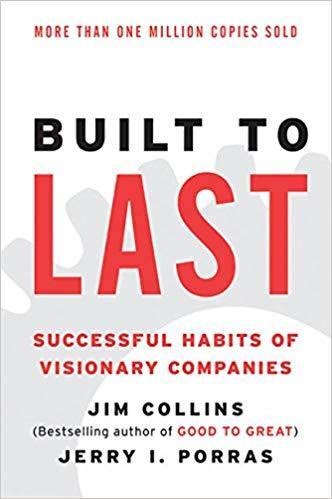