Did you know that the biggest differential of this generation is creativity? Find out how to make your workplace more creative based on the world’s largest animation company!

The book “Creativity, Inc.” will show you how Pixar, the creator of amazing movies, such as “Toy Story”, “The Incredibles”, “UP”, and “Finding Nemo”, became a revolutionary, innovative, and creative company.

Ed Catmull, president and co-founder of the company, brings his experience and trajectory to help you transform your workplace into a space open for creativity and ideas.

Are you curious? So come with us, because in this book summary we will know what made Pixar get where it is today!

Published by Random House on 8th April 2014, “Creativity, Inc.” brings in 368 pages the learnings of the president of Pixar, Edwin Catmull, in 33 years of the company.

Defined by Forbes as probably the best business book ever written, it presents a brief history of Pixar and its tactics to stimulate creativity in the workplace.

Who is Ed Catmull?

Ph.D. in Computer Science, Ed Catmull is, with Steve Jobs, one of the founders of Pixar and responsible for developing the technologies that allowed the creation of “Toy Story”, the first animated movie made 100% with a computer.

His childhood dream was precisely to make the first computer-animated film and he succeeded. From that, he started to build a successful company with a strong culture.

A forerunner in the field of computing and winner of 5 Oscars, Ed Catmull brings in this book how he and his colleagues developed a philosophy at Pixar, focused entirely on the creativity of employees.

Why should I read “Creativity, Inc.”?

Because the ideas of “Creativity, Inc.” are for leaders and people who want to know how to make their team more productive and motivated by the company’s goals.

Through the author’s experiences, you can extract tips for managing your team, strengthening your company’s culture, and transforming the corporate environment into a place favorable to creativity.

What can I learn from “Creativity, Inc.”?

Download the “Creativity, Inc.” Book Summary in PDF for free

A Brief History of Pixar: how did it all begin?

Before we delve deeper into the author’s lessons, it’s important to understand a little bit about Pixar’s history and how it got to where it is today.

It all started when Ed Catmull was called to work on Lucasfilm to assist with the visual effects of Star Wars. There he had his own division and was able to develop his technologies and software.

In 1986, Steve Jobs bought this division and turned it into an independent company. Together, he and Ed founded Pixar, and in partnership with Disney, transformed a company that used to sell software to the world’s largest animation movie producer.

Leading a company of this size, with several employees, and still achieving great results, requires enormous responsibility and leadership.

That is why we will understand from now on that a creative company is made by the whole team committed to incredible ideas, constant feedback, and an environment favorable to creativity.

In the book “Creativity, Inc.”, the author shows that the key to Pixar’s success was building great teams that were empowered and motivated with the work they did.

“Toy Story”, the first movie and one of the company’s greatest hits, was created through the commitment of a team that knew that making the first computer-animated film would be (and was) revolutionary.

With “Toy Story 2”, they didn’t give due priority to the movie and, halfway through, realized the various problems that were affecting the quality of the final product.

That moment, the managers realized the importance of building a good team and brought the whole company together seven days a week to change and improve the work.

The result? “Toy Story 2” not only corrected its course but surpassed the first movie in quality and revenue. And all of this happened thanks to a team, formed by creative people who were 100% involved with the project.

Ed Catmull says that when you have a good idea and give it to a bad team, they will ruin the idea. However, if you have a good team and a bad idea, that team will transform that idea and extract what’s good in it.

So, always give more preference to people than to ideas, because creative people create good ideas, but good ideas can be destroyed by bad teams.

How important is constant feedback?

We have already talked about the importance of having an incredible team, but one of the main steps to having a high-performance group is to stimulate feedback.

At Pixar, they worked with an extremely open feedback system. It was the “Braintrust” model, composed of the company’s great and experienced leaders, who read the scripts, watched the movies, and gave honest feedback to the responsible team.

A key factor was that, although feedbacks were given by the great leaders, the team had the responsibility for accepting them or not.

For example, in the development of a movie, the “Braintrust” would not point out the solution but would point out the problem. It is up to the director of the film, then, to analyze this feedback and develop a solution.

Ed Catmull points out that during his experience as president of Pixar and especially with the history of the problems with “Toy Story 2”, he learned to trust the process. So, Pixar has a lean process, where feedback has become part of it.

That is, during the execution of a project, the team receives constant feedback so that problems can be solved as soon as possible and don’t generate bigger problems in the future. These faster cycles make it easier to fix these problems.

In “Creativity, Inc.”, the author says his goal is not to prevent mistakes from occurring, as they are part of the process. The main focus is to recover from failures because it’s a great way to learn and should not be prevented, but rather quickly solved.

How to create a creative environment?

To be a creative company, the stimuli need to be constant and everywhere. Therefore, in the book “Creativity, Inc.”, Ed Catmull presents ways to have a more creative environment that favors the development of new ideas.

Imagine yourself working in a gray, dark place that does not encourage communication between people. Now imagine yourself in a clear, comfortable environment, where people exchange ideas and can let their imagination run wild.

Which of these two places will stimulate more creativity? Pixar thought about it and created a happy and colorful environment, where people like to be, and that contributes to new ideas.

Listen to all the ideas

We’ve already talked about the importance of listening to feedback, but besides it, people should also be open to everything.

Ed Catmull says that, at Pixar, all employees have the autonomy to give ideas. Got an idea for a movie? Do you believe that something can be improved in the work environment? Did you discover a new technology? The company will listen to you and assist in the development of these suggestions.

A great example of this support is the “personal project days”. Every month, Pixar reserves two days for employees to work on their projects and provides the resources for that.

This way, employees can be happier and more motivated at work and, who knows, develop a great idea that produces results for the company.

When we align all the concepts presented in the book “Creativity, Inc.”, we can make the company and its environment much better and more creative.

With a personalized environment and knowing how to listen to what employees think, we already have the foundation of creativity at work, giving feedback, allowing the development and improvement of ideas, and the key to all this is to focus on people.

It is people who will have new thoughts and imagine new concepts and they will execute. So, start by forming your ideal team, your selection of creative people, and they will bring great fruits to your company.

To finish the book, Ed Catmull gives us some insights and good practices that he developed in his years as president of Pixar. Among them, we can mention:

Other books about creativity in the workplace

In “Everybody Matters”, Bob Chapman and Raj Sisodia say that employees should be encouraged to innovate and try new things, even if they fail. This makes them realize that managers have full confidence in their potential and in what they do. In the book, this practice is called “responsible freedom”.

The author of “Traction”, Gino Wickman, explores how successful entrepreneurs have an attractive and well-defined vision for their business. Also, they know how to communicate this message to employees. From this, a guideline to develop solutions and guide strategic actions is created to be followed by everyone within the organization.

And in “Developing the Leader Within You 2.0”, John Maxwell discusses the importance of leaders demonstrating that they care about their team and developing new leaders among them.

How can I apply the ideas from “Creativity, Inc.”?

Now that you’ve understood the concepts, it's time to put them into practice, right?

Did you get inspired by the insights of Edwin Catmull? Leave your opinion in the comments!

Now when we watch Pixar movies like Toy Story and Finding Nemo, we will remember the number of people involved and how the company encourages everyone to develop!

And if you want to get the complete book, just click on the image below. 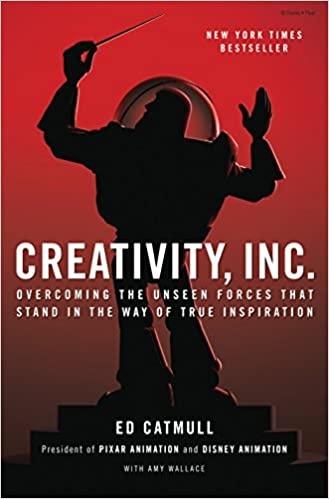