Learn about the values disseminated by AB Inbev's partners through Fundação Estudar!

Have you ever heard of Fundação Estudar? It is an organization founded in 1991 by Jorge Paulo Lemann, Beto Sicupira and Marcel Telles — partners at Ab Inbev, which seeks to encourage education in Brazil.

For that, training and scholarships are offered, as well as events and lectures. So far, more than 1000 students have been granted scholarships to study in over 25 countries with the foundation's support.

With this summary, you will get to know the values that drive Fundação Estudar, as well as better understand the formula used to achieve excellence.

Want to know more? Read through to the end for practical application tips for the values presented in this summary!

About the book “Cultura de Excelência”

Launched in 2017, the title of the book can be translated as “culture of excellence”. In its preface, the work brings contributions from the trio of founders of Fundação Estudar, with a brief presentation of the ideas they believe are responsible for shaping the culture disseminated by the organization.

Containing 207 pages and divided into 6 parts, each representing one of the Foundation's values, the book features a collection of stories from people who have been helped by the Foundation.

Furthermore, the work shows the organization's chronology, highlighting the main events, as well as its mission, values, initiatives and a brief description of the main training courses offered.

About the author David Cohen

Born in Rio de Janeiro, David Cohen studied Engineering at UFRJ for 3 years before deciding to change his route to Journalism.

Graduated in Communication from PUC-Rio, the author worked as editorial director of the magazine “Época Negócios” and executive editor of the magazine Exame. In addition, he contributed to vehicles such as Folha de São Paulo and wrote the novel “Fábrica de almas”.

The book's content is interesting for individuals looking to rise in the job market. It can also be suitable for leaders who want to implement a culture of excellence in their organizations.

Furthermore, the stories told in the book are inspiring, especially for young people at the beginning of their academic and professional life.

In the following summary, we'll delve deeper into each of the values highlighted in the book, showing examples of stories that reflect the importance of these teachings. Read on to find out more!

In the first part of the book, the author explains the philosophy of goals used at Fundação Estudar, which must be aggressive, but not impossible. He cites the importance of having an ultimate goal, as from that point on, the means to achieve it will appear more naturally.

To exemplify, David tells the story of Wilian Cortopassi, who became interested in medical research after his father found out he had cancer.

Since then, his main motivation has been to discover ways to contribute to the development of treatments for the disease. In his trajectory, he went through IME (Brazilian Military Institute of Engineering), where he had difficulties because he did not identify himself with military obligations.

Then, with the help of Fundação Estudar, he was able to graduate in Chemistry and pursue a doctorate at Oxford. His research focuses on epigenetics, which offers a new frontier in fighting cancer.

Another character highlighted in the book is Hugo Barra, a Brazilian employed as a top executive at Google who decided, in 2013, to move to China to work at the then startup Xiaomi.

He says that the reaction of most people to his idea was one of amazement and even ridicule, but that people connected to Estudar saw this change in a different way.

They understood what Hugo was thinking. He is passionate about challenges, and moving to China to work as the only foreigner within the company was quite a challenge.

But this challenge was justified: it was a company with immense potential and global ambition. The following year, Xiaomi reached the rank of third-largest cellphone maker in the world, with a market value of US$46 billion.

According to the philosophy followed by the institution, you must be obstinate in your efforts to achieve excellence.

The author explains that they understand that work should not be seen as a burden that serves only to ensure a livelihood, but as a tool to fulfill your potential.

In this section of the book, the author tells overcoming stories of young people who, despite many difficulties, made a great effort and, with the help of different institutions, including Fundação Estudar, managed to succeed.

Luiz Fernando da Silva Sousa grew up in Rocinha, the largest favela in Brazil, and has always shown interest in classes at the public school where he studied.

One day, he answered a test that was passed by members of Ismart, a non-profit organization that provides scholarships, and was approved to study at a high-quality school in Rio de Janeiro.

From there, always with great dedication and with the support of Ismart and Estudar, he graduated in Law and was approved in the Ambev trainee program, where he currently holds a managerial position.

The trio of founders follows the teachings that Jim Collins explains in his book “Good to Great”: a company is like a bus and the leader is the driver.

Therefore, the first step in changing the direction of an organization is to get the right people on the bus, as having competent individuals working together is the most valuable asset a company can possess.

The author highlights an interesting premise that exists at Fundação Estudar: the one that values the importance of having partners when starting a new venture.

He explains that it is a way of sharing risks, dividing investments and, more importantly, it is proof that someone else, using different decision criteria, also believes in the success of the business.

An example of this was when the then scholarship holder Ana Gabriela Pessoa had the opportunity to present her business idea to Jorge Paulo Lemann, and he refused the proposal, suggesting that she get one more person to help start the company

Taking advantage of the existing network within Estudar, she met Ana Maria Diniz, who became interested in the project. A few years later, the education company they created was bought by multinational Pearson.

The author explains that, in the Estudar philosophy, the great benefit of knowledge is the value created when it is well used. This is done through action, according to Beto Sicupira, it is necessary to have a “thirst for knowledge and hunger for application”.

Furthermore, they understand that there is no need to reinvent the wheel when creating something new. It is essential to study what already exists to know how to reach that level and beyond, a benchmarking technique.

An example of this mentioned in the book was when Beto Sicupira would take over Lojas Americanas and, to better prepare, he scheduled a visit to Sam Walton, founder of Walmart.

Another factor seen as essential for development is the broadening of known horizons. The greater the range of lived experiences, the greater the source of data for generating good solutions.

This perception varies according to the individual's reality. For some, this can happen when doing an exchange program abroad, while others discover a new world when they see the news on TV for the first time, as was the case with Gilberto Giuzio.

He lived in a small rural community in the interior of Mato Grosso, Brazil, but upon discovering that other realities existed, he saw new perspectives for his life.

With many difficulties, he managed to go back to school. Among many setbacks, he was approved in first place at ITA, IME, Unicamp and USP (some of the best universities in Brazil). After graduation, he was selected for an MBA at Columbia University in New York.

Part 5 - Being a protagonist

This value is related to the encouragement of “ownership” within the organization. For those being led, it is important to have a feeling of responsibility and to be engaged with the work performed.

On the other hand, it is essential that leaders promote this type of attitude, offering sufficient autonomy to their team. This makes the interests of the company above any vanity or personal advantage.

David Cohen exemplifies that a good tool for this is the manager's incentive program, such as bonuses and stock options for the company. In this way, interests are aligned with the organization's strategy.

The person who feels like an owner seeks the growth of the company and its team, as they understand that they will develop together. On the other hand, the professional who just wants to improve his/her CV does not worry much about the company, as he/she will probably be in another one in a few years.

Marcel Telles explains that, when hiring someone, he verifies if the person has the following characteristics: willingness to perform and to get involved.

Thus, it is easier to dedicate more and, consequently, to accomplish great things. However, he reminds us that it is also important to know how to let go, as life is made up of cycles.

Finally, the last value presented in the book emphasizes the importance of the impact caused by your work, as that is what your legacy will be, which remains as the change left by you in the world.

“Leaps”, as they are called within the foundation, are bold actions that have the potential to transform the lives of many people in a vast way. In this sense, the author cites several projects, all with the participation of Estudar members:

The book also highlights the value and growth promoted by social businesses, which operate in the same way as a profitable business, striving for operational efficiency, meeting goals and hard work.

Furthermore, they are usually based on a very strong ideal (purpose), which allows the visualization of a main objective and facilitates the establishment of goals that can generate a high impact on society.

In “No Rules Rules”, Reed Hastings, co-founder of Netflix, supports the idea of empowering employees, as he believes that this is the best way to promote innovation within the company.

Sandro Magaldi and José Salibi explain in the work “O Novo Código da Cultura” that cultural transformation within an organization is essential for success, as this is the only way to align strategic objectives across all sectors of the company.

In the book “The Everything Store”, author Brad Stone tells how important in Jeff Bezos' trajectory was the belief in his idea (purpose), the learning from other experiences and the dissemination of Amazon's main focus among the collaborators.

Did you like this summary of the book “Cultura de Excelência”?

After reading the summary of this amazing book, do you feel you are ready to transform your company's culture?

We hope you enjoyed the summary and were inspired by so many amazing stories.

Leave your opinion about the content, your feedback is of great importance for our team to continue offering quality material to our esteemed readers!

And to have access to the full content of this work, purchase the book by clicking on the image below: 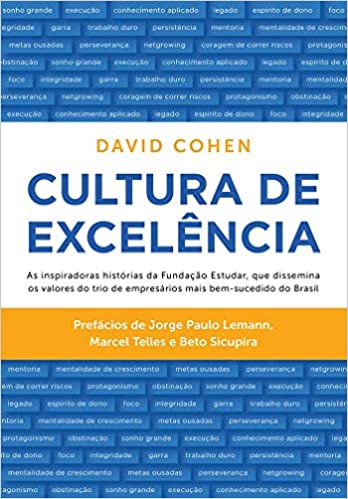