Understand how the information and data industry works. Discover what to do to regain control of your life and privacy, living a more peaceful life.

We know that we are in the technological age and changes in the world happen faster and faster. However, what draws the most attention is that we gain information while we lose privacy.

Sometimes we are perplexed to find ourselves in situations where websites, programs, already have a range of data about us. The surveillance industry is taking control of our lives.

Understand, in this summary of the book “Data and Goliath”, by Bruce Schneier, how to deal with technology, select the exhibition and conquer the privacy that, although important, is so difficult today.

Are you curious? Continue with us in this summary!

About the book “Data and Goliath”

The book “Data and Goliath” had its first publication in 2015 and contains important and clarifying points regarding the breach of privacy and how the mass surveillance system works.

Who is Bruce Schneier?

Bruce Schneier is an American and founder of Counterpane Internet Security. He is a renowned writer, cryptographer and expert on topics related to computer privacy and security.

Who should read the book “Data and Goliath”?

Main ideas of the book “Data and Goliath”

Download the “Data and Goliath” Book Summary in PDF for free

How does the exposure of our data happen?

Being connected has now become a necessity these days. But do you know what happens to the data released on the large network? Understand that you are far from being protected.

Your connection route, the websites visited, access to social networks, incoming calls, emails, past text messages are under surveillance twenty-four hours a day.

The growth of technology, devices with an even greater degree of intelligence, are equipment with a thousand and one uses and are constant sources of information.

The problem is that it all happens without our knowledge and consent. Our data is sold, analyzed, saved which makes the vulnerability of our privacy even more visible.

All of this constructed history is a function of metadata. The data is the information acquired and the metadata is the total context. In this context, people's daily lives are revealed, tastes, friends, frequented environments making life more and more exposed.

The power of surveillance has acquired a surreal proportion and can be characterized as hidden, automatic and omnipresent.

It is hidden, as it records our steps on the Internet in a veiled way. The information softwares or even the questionnaires carried out by the websites, carry out this action more and more efficiently.

Surveillance is automatic because it does not depend on our will and is ubiquitous because we are in the age of technology, and being connected is everything we do most of our time.

One of the biggest divergences between traditional and technological surveillance is that the latter can be timeless, can easily work with data in the past and link with situations in the present to project, for example, someone's future or decisions.

But what is the purpose of all this?

The goal is advertising and all this surveillance is done through a tool called a cookie. Initially, the creation of this mechanism was only to facilitate navigation.

Over time, it has become an increasingly powerful data store and customer identifier.

The tangle of issues: who and why are they watching our data?

We know that the customer is not under surveillance today. However, this happened in different ways in history. The book “Data and Goliath” reports that this fact happened through four basic flows of surveillance. They are:

1. The flow of manufacturing companies;

Marketing and credit companies have joined forces and made the biggest data and information brokers in droves.

If the purpose of all these issues is advertising, it has also changed. With the inefficiency of some services, marketing was losing profit by advertising products to those people who were far from the consumer market.

Advertising customization is broad. With ubiquitous surveillance, it becomes increasingly easy to identify who really needs the product or service in question.

And why is it so difficult to pass laws to curb corporate surveillance?

Because it is not separate from government surveillance. It is a link of interests in which the government needs information that often does not have it, and companies specialized in information technology make this data available.

The problem of rampant surveillance runs through everything mentioned above. Surveillance is also a form of oppression.

Some countries under a dictatorial government, such as China, use the services of this espionage to curb the population and determine what they can and cannot consume.

This happens through what they call “Golden Shield”, a powerful firewall with the objective of censoring and shielding the freedom of those who live in that country.

Another example that characterizes surveillance as invasive and an enemy of democracy, is the simple fact that exposing one's own ideas can be very dangerous, be understood as an attack on the government and criminal investigation.

The arrangement of the data can also be a discriminatory factor.

This practice is called “web lining” and can be persuasive. It is an improved redlining extender that, according to the author, was a practice used in the past to bring together the wealthiest groups of those interested in the product, ensuring differentiated benefits.

Nowadays, price discrimination exists and is determined by some characteristic factors. Age, sex and financial condition are in the ranking.

The idea of immediacy can also be put as an example, especially because people who are able to purchase the product more quickly, do so with a discount at the time of purchase, according to the responsible companies.

Through all of this, what can we say? Privacy is being violated and the right acquired by law is being completely neglected.

As much as the defenders explain that the surveillance is being done by algorithms or programs and not by people, when there is the negotiation of data or the purchase of the same, it is the companies that do the process and the risk of breaking the confidentiality of information is huge.

What can be done to ensure data protection?

Some solutions can be taken in an attempt to alleviate the problems mentioned. We know that there are many causative biases, but the work mentions some actions necessary for the government, companies and the population in general.

It has already been mentioned that public authorities have access to information and that it is commercialized. Looking at it from another perspective, the government also needs this data to ensure safety, but the abuse and inappropriate use of these materials are factors of concern.

One tip would be to allow the collection to be known to the individual in question. Political regimes themselves can assist in this endeavor, releasing due information without letting the government take over and reach the information it does not need.

A court order can be an excellent tip. The problem is that when mass surveillance is done, it is broken, which is guaranteed by law. This can be explained by the fact that espionage extends beyond what is necessary and allowed.

Government awareness is the main starting point to alleviate the problem.

Protecting the right to freedom and privacy are excellent attitudes and this action must cross borders, after all, international agreements are sources of risk for those inside, but also outside the country.

The concept of espionage needs to be different from surveillance. Spying needs to be directed by the president and is the responsibility of the State Department and the Armed Forces. Surveillance is not justified and, after all, it is misused by the government as a criminal investigative function.

Well, we know that corporate surveillance needs limits. But we also have to take into account how much the action of the companies helps in the process of navigation in the large network.

The targeting of products or services that many do not find so easily, are some positive points of this action. According to Bruce, the change in the behavior of companies with regard to surveillance must be guided by the demands of the population on the part of the government.

Making companies responsible for breaking the promised secrecy is a good start. Data regulation, through the organization's accountability, is essential to the change process.

The problem is the prevailing selfishness that prevents the transformation from happening. The data leaked, sold and traded mostly seek corporate interests.

That’s the need to implement the rules of fiduciary information and use the data in the best possible way, aiming primarily at the consumer and not the company responsible for collecting the data.

And what can we do as a population?

First of all, understand that surveillance is a technological and legal issue and we need to learn how to defend ourselves. This statement can be made through some actions, including:

It is important that you understand that you can be a focus of political change. Inspecting government actions, studying cybercrime and being aware of what's going on around the world, are some actions you can take and will make all the difference in your life.

Other books about Internet data acquisition and protection

In the work “The Big Nine”, the author Amy Webb reports how artificial intelligence has given us great benefits. However, some global powers have used it to invade privacy and authority over people. She states that if we continue like this, humanity will face a dark future.

For Tom Chatfield in his book “How to Thrive in the Digital Age” there is a close relationship between humans and technology. He says that along the advances, human beings have shaped new technological tools and these, in turn, have shaped their behavior.

Fernando Ulrich in “Bitcoin: The Digital Age Currency”, explains all the concepts that surround Bitcoins, including the advantages and disadvantages about its safety involving the internet.

Right, so how can I ensure the privacy of information on the Internet?

Rate this summary of the book “Data and Goliath”!

We want to know what you think of this summary. Your feedback helps us provide good material for you.

If you want to know all the details of the work, click on the image to buy the book: 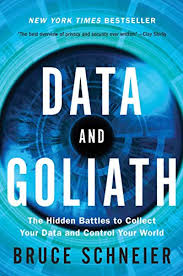