Learn how to revolutionize your business with the millionaire entrepreneur's philosophy that has succeeded in putting the customer first and foremost.

Tony Hsieh in "Delivering Happiness", exposes to us the sense of success experienced by him and all employees of Zappos, where he is CEO. Amazon e-commerce had just bought the company for about $1 billion, the largest acquisition in Amazon's history.

The author recalls that in 1998, the company he co-founded, LinkExchange, was sold to nothing less than Microsoft for $265 million after 2 and a half years of history.

It may be thought that Tony has always chosen the right business choices and was far from wrong, but his path has been trailed by failure and learning. Want to know how Tony Hsieh achieved success and became a millionaire with just a few years on the market? Continue reading!

About the book "Delivering Happiness"

The book "Delivering Happiness" is divided into 3 sections and was first published in 2010. It is a handbook on how to be an entrepreneur who brings happiness to the business.

For him, the customer should be received in the best way and be positively contaminated by the treatment of the team.

It is a worldwide sales success for its easy and intimate language.

He was nominated for the Goodreads Choice Award for Best Non-Fiction.

About the author Tony Hsieh

Tony Hsieh was the founder of large companies such as LinkExchange and the e-commerce giant, Zappos. com - an online store for general footwear and clothes, in 2009, reached the $1 billion mark in sales, and, as he said, it's a company that "delivers happiness".

Tony had a degree in Computer Science from Harvard University and gained prominence in the media and became a world reference in customer service due to the excellent service provided by Zappos and the publication of his book Delivering Happiness.

The author died in November 2020 from injuries caused by a fire in his home in the USA.

Entrepreneurs who want to change the way they relate to their customers and revolutionize buying.

It is a necessary bestseller for all those who work in commerce or who wish to work with the general public for purchasing or selling products.

Download the "Delivering Happiness" Book Summary in PDF for free

Tony Hsieh's entrepreneurial story began with an unusual birthday wish he made to his parents as a child: an earthworm with about a thousand worms. I had the idea of selling them and profiting from it, but of course, it didn't work out.

After spending a hard childhood with his parents, who forced him to study hard and practice music, sports, and other activities exhaustively, Hsieh went to college and, in addition to having to meet Harvard's requirements, was able to focus on his own interests (finally).

As he was very easy with technology and this was a booming area at the time, he joined a dorm roommate from the University and together decided to participate in interviews with technology companies.

Both his friend and he received offers from Oracle (a multinational technology and computer company specializing in hardware, software and database development). A great job for college graduates.

He says in "Delivering Happiness" that despite the achievement, time went on showing that it was not what the two really wanted. So, they decided to start a business of their own: create websites for companies. They set it as a next step to resign from Oracle and pursue their convictions. They thought they had risked too much, but it was already done.

Overview: The search for gold

Unfortunately for the two friends, the idea did not go much further. They were thrilled with the notion of owning and running a business of their own, but the reality ended up disenchanting the fantasy and it was getting harder and harder to capture new customers.

They sought to come up with a new idea for an internet business, and eventually formulated it after a while. The big LinkExchange, which came out of the idea of Hsieh and his friend, was a way for sites that couldn't afford advertising to get free advertising. The idea was successful.

After five months of operation he goes to say in "Delivering Happiness", that they received an offer to sell LinkExchange for $1 million. They thought how exciting this was, but declined the offer. Believing that the company had the potential to grow much more, and a right assumption indeed.

They gathered friends and acquaintances to be part of the ever-growing company. Shortly thereafter, it was Yahoo! give the faces with the intention of buying. $20 million was the amount they were willing to pay.

They decided to dare. They did not accept the offer and relied on advancing the initial idea.

Overview: Fast growth is not synonymous with certain success

The company expanded, the network of friends ran out, and they began hiring strangers who wanted to join the company. The problem was that many of these people were not there to work as a team, but to make money and build resumes.

The company's culture began to be overshadowed, and the urge to go to work was no longer the same as it had been for Tony Hsieh. One and a half years later, the company moved from an environment with a team united to one that was now made up of policies and positions.

There was not a single factor responsible for the deterioration of the company's culture and he was not quite sure how to act. The economy was not doing well and going broke became a concern.

To everyone's happiness, they built very good relationships with Yahoo!, Netscape, and Microsoft, and that relationship yielded LinkExchange's buying interests. Microsoft offered $265 million, and they accepted, there was no other way out.

Overview: The idea of success

It all started when Tony Hsieh received audio from a guy named Nick, saying he had just created a website called shoesite. com and wanted to turn it into an Amazon of shoes.

He wasn't interested at first, but after seeing the data he changed his mind: shoes represented a $40 billion industry in the United States, it was the fastest-growing segment of the industry.

They decided to stay in touch and shortly afterward the company earned the name Zappos and was already accumulating $2, 000 orders per week. How to refuse such a brilliant idea?

After many investments, failures, meetings, and work, Tony and his friends involved in creating Zappos were pleased.

The company went through many ups and downs, had its headquarters moved from one city to another to improve the logistics of services, and many people joined the team as well as many lefts.

Over the years he shows in "Delivering Happiness", Zappos' main growth guideline has been customer recurrence and word of mouth. The company's philosophy was to retain the money that would be spent on advertising and invest it in customer service and customer experience, so they marketed themselves, and that was great in every way.

There are assistants at the call center 24 hours a day, 7 days a week. Zappos' concern with the customer made it take off.

Happiness is usually tied to achieving something, achieving good, or fulfilling desires. But studies show that for many, finally achieving their goal in life would not bring sustainable happiness, yet many people have spent their lives in search of what would make them happy.

Tony Hsieh shows us at the end of "Delivering Happiness" that there are 3 types of happiness:

Pleasure and Passion are part of a comfort zone that has the shortest duration, while the Greater Purpose of happiness is related to being part of something larger than itself and meaningful.

Following this thought, people should go in search of a Higher Purpose, instead of settling for short spaces where they are happy for pleasure or passion. The author concludes the work with the question:

"What is your highest purpose?"

"From the Ground Up" is a biography of Howard Schultz that tells how the businessman turned Starbucks into one of the largest franchises in the world. He says his responsibility to Starbucks goes far beyond simply making money. Their intentions are to apply the company's profits in a transformative purpose to its audience in a balanced manner.

Luciana Medeiros's "Let's Have a Coffee?" Tells the story of the businesswoman, Maria Luisa, who brought this franchise to Brazil. In the work, she advises: do not hurry; You have to take it one step at a time to avoid running over in the process.

The owner of Cacau Show, Alexandre Tadeu, in his work "A Truffle and... 1000 Stores Later!" Considers passion as the beginning of everything, including in professional life. From a young age, he was convinced that accomplishment at work was fundamental in his pursuit of happiness.

Now that you are more into the subject matter explored in the book, how about we recap some ideas?

The work is divided into 3 parts that discuss the author's history and his entrepreneurial journey until he finds himself in his current successful company Zappos. Throughout the book, we find that success depends heavily on willpower, study, and good company.

Being true to what you do, believing in your ideas, and striving for fulfillment are essential to achieving the glorious outcome.

Did you like this summary of the book "Delivering Happiness"?

We hope this content was helpful to you and we look forward to your feedback in the comments! Tell us what you think!

If you want to read the entire book, purchase the full version by following the links below: 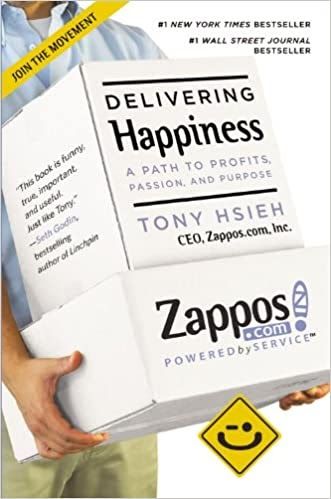