Do you like technology, innovation and business? See what you can learn from today's most daring billionaire entrepreneur.

Have you ever heard of Tesla Motors' electric cars, SolarCity's panels, and SpaceX's rockets? No? So you probably don't know who is behind those companies.

This person is considered a visionary entrepreneur, and most of the businessmen of Silicon Valley see him as a mix of Steve Jobs and Bill Gates.

Also, one of his next goals is the colonization of Mars.

The writer Ashlee Vance gathered the history of this man so far in an inspiring way. After reading it, we can only imagine what is yet to come.

Are you curious? Come with us to see what led Elon Musk to succeed and his unbelievable achievements in different areas.

About the book "Elon Musk"

The book "Elon Musk: Tesla, SpaceX, and the Quest for a Fantastic Future" was first published on 19 May 2015, by Ecco Press.

With an engaging narrative of his biography and all the details of unstable and successful moments of his life, this book is based on more than 50 hours of conversation with Musk and interviews with friends, family, and employees, totaling more than 300 people.

According to the author Ashlee Vance, Musk's main passion is to promote solutions for the future of humanity. This is the goal that fuels his business in space exploration, electric cars and sustainable energy, creating great political and economic impacts.

About the author Ashlee Vance

Ashlee Vance was born in South Africa and grew up in the United States. He made a career as a journalist, having worked at big companies like The New York Times and Bloomberg Businessweek.

Vance also wrote the book Geek Silicon Valley, about the history of the place, and he has signed dozens of articles on various topics, but his greatest relevance is in the area of technology.

The biography of Elon Musk is for people who want to know everything about technology, business, and innovation.

Also, it is for those who want to extinguish the word "impossible" of their vocabulary, to get inspired to put ideas into practice and be more!

To prepare you for what lies ahead, here are some highlights that represent a little of Elon Musk's biography, such as:

In this summary, we'll pass on the key lessons and insights from Elon Musk. So keep going!

Download the "Elon Musk" Book Summary in PDF for free

Overview: The World of Elon Musk

Ashlee Vance starts Elon Musk's journey in South Africa, where he was born. Musk had a troubled childhood and a bad relationship with his father. At school, he had a few friends and was often teased by his classmates.

One way out was to study and read all the time. Musk used to read encyclopedias and remember every detail. As a result, he always showed strong ideas of about his desires and endeavors.

In 1988, he opted out of military service and moved first to Canada and then to the United States. At first, things didn't go so well, Musk worked in countless temporary jobs to have enough to survive and had many hardships.

However, everything changed when an opportunity to study business came up. In that same period, Musk also met the woman of his life.

Since then, his success only progressed, especially two years later, when he asked to be transferred to the University of Pennsylvania. There, he created ways of entrepreneurship to support himself and established strategic contacts.

According to Ashlee Vance, the main fuel for the success of Elon Musk is his mission to save humanity, because on Earth everyone is very vulnerable.

Through this desire, Musk shows a relentless determination to achieve his goals. He sets unrealistic objectives, takes on heavy workloads, and demands that all his employees are engaged and 100% determined to change the history of the world just like he is.

It is precisely the loyalty to great ideas that makes him respected by his team, something vital for a leader.

Soon after he left college, Elon Musk went on an adventure and created a startup with his brother. It was called Zip2 and had the objective of connecting companies to the internet.

At the time, it was difficult to understand the consequences of the internet, and sales were not going very well. Until, at a certain point, an investor saw value in the company and started investing in new engineers, restructuring processes, and setting goals.

In 1999, the company was sold for $ 307 million. Musk wanted new challenges and projects, as well as becoming a successful CEO.

The entrepreneur then spent part of the money to buy personal goods, and the rest for the future of his next business. It would be X. com, a company of financial transactions via the internet, a kind of online bank.

As Ashlee Vance shows in the book, X. com merged with PayPal, a name it started using. Things were not to Musk's taste, and in 2002 PayPal was sold to eBay for $ 1.5 billion, enough for him to get $ 250 million and the dream of going even further.

Elon Musk has always had long-term goals and wanted to accomplish things that seemed unreal. His main goals remain the same since he was a child and, for him, this is what fuels the incessant search for results.

After selling the last company, Ashlee Vance explains that Musk's next target was to invest in rockets. So, in 2002, he founded SpaceX with the aim of being a low-cost space airline company. The idea was to carry three times more weight than the competition for a quarter of the price.

In just 15 months, Musk had plans to launch the first rocket. However, it only happened four years later. Do you think it unsettled him? No way!

For him, failures are part of any process. The most important thing is not to give up, however complex your goal may be.

With this attitude, SpaceX grew more and more and became an exclusive company in the market.

If anyone is responsible for making electric cars desirable, comfortable, and even being compared to big brands like Ferrari and Jaguar, that someone is Elon Musk.

It all started when Musk was one of the few interested in investing US $6.5 million in a Tesla prototype model, becoming the sole shareholder and chairman of the company. For him, the project had enormous potential and could revolutionize the market.

At first, things were slow. But in 2012 Tesla launched Model S sedan, a sports car that changed the history of transportation forever. The electric vehicle, called "computer with wheels", won the title of the best car ever produced and scored high ratings.

This victory was surprising since Musk had never made cars, and Silicon Valley had little involvement with the automotive industry. Ashlee Vance brings the great lesson we can draw from this: determination is the key to achieve any result!

Two cousins of Elon Musk had the idea to offer a complete service of solar energy, from the initial phase to the installation.

From this, another venture was born. He was responsible for offering all investment and infrastructure, becoming the main shareholder and president of SolarCity.

Six years later, the organization performed services for all types of consumers, from homes to great companies, becoming the largest solar panel installation business in the USA.

These three companies are Musk's empire. The best part is that they have great individual successes, but complement each other. Especially in a market so difficult to consolidate.

They are also part of his mission to develop a sustainable culture to improve human life. So, all his efforts were always focused on the same goal.

As you could see, Musk has always had great plans, excellent ideas, and the will to turn it all into reality.

According to the author Ashlee Vance, Musk's wishes have not stopped here, he plans to continue his brave projects.

One of his next ideas is to adopt a new transportation model, called Hyperloop, which will transport people and cars through capsules.

Also, he intends to launch the Tesla Model 3 with much more features and a third of the value compared to the previous version, the Model 2.

And at SpaceX, Elon Musk plans to send people into space and start producing and selling satellites.

In the book "Value Generation", Flávio Augusto says that winning thoughts are more likely to generate positive results. Whereas, trivial thoughts generate only superficial results. You can learn to have a winning mentality with winners. So make use of the current technology to access biographical content and materials produced by these people. To start, get out of conformity and sameness.

Cristiane Correa, author of the book "Dream Big", emphasizes the importance of maintaining a process of continuous improvement to achieve your goals. Her ideas were inspired by the views of the wealthiest entrepreneurs in Brazil. It is possible to extract excellent lessons to apply in your entrepreneurial journey and, thus, achieve surprising results.

Finally, in the book "Winning", Jack Welch says that we must always seek quality in our professional lives. If you are not satisfied with your job, find another one that will give enthusiasm in your career, it is very important to leave the comfort zone and don't settle. When starting a new experience, try to exceed all expectations and always do your best.

Did you like this summary of the book "Elon Musk"?

We hope you enjoyed the experiences of Elon Musk. Leave your opinion in the comments, your feedback is very important to us.

Also, to know all the details about this daring entrepreneur, you can buy the complete book by clicking on the image below: 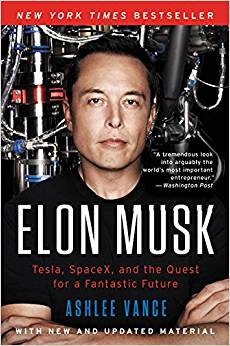