everything goes wrong, putting an obsticle against your goal, do you surrender or do you fight? Come find out how Commander Shackleton and his crew triumphed against the world's most unpredictable forces, those of nature!

When a perfectly calculated plan gets out of hand and takes on a life of its own, fear and insecurity dominate our thoughts without asking permission. So what do we do? Do we give in or do we prevail?

"Endurance: Shackleton's Incredible Voyage" is the true story of the failure of the Imperial Transantarctic Expedition led by Sir Ernest Shackleton in his attempt to cross the Antarctic continent in 1914.

The book is a reminder of the strength within a group, acknowledging their imperfections and complementing each other to face the unforeseen.

These tales, fables, and stories are part of the construction of the human being; we take fictional and real examples to analyze and learn from great steps taken before. It will be no different this time, so what can we learn from this story? Come and find out!

This book has several editions dating back to 1959, with splendid documentaries and biographies about this moment of perseverance and courage in history. Divided into 7 parts with 320 pages, "Endurance: Shackleton's Incredible Voyage" is one of the bestsellers in its category.

Bringing real dialogues and diary entries from the commander, sailors, researchers, and crew in general. We have in our hands not a formula for success, but a real demonstration of imperfections and teamwork, where trust proved essential for the survival of all.

Who is Alfred Lansing?

A journalism graduate from Northwestern University, Alfred Lansing is an American author and writer, known primarily for writing the book that tells the story of the ship Endurance and the fate that awaited those aboard.

Why should I read “Endurance: Shackleton's Incredible Voyage”?

Sometimes all we need is to listen, or in this case read, someone's story in order to motivate us. This book is here for that very reason; by following the path of these 28 men, we can perceive important keys that apply in several areas of our lives.

Therefore, if you feel stuck with your problems, and no longer have the initial motivation for some project in your life, here you will surely find many of the same insecurity and fear that were controlled and triumphant with perseverance and confidence.

When planning fails, what can be done?

At the beginning of a project we plan the smallest details, as much as possible, but when the achievement is something never conquered before, the risks and unpredictability increase immensely. However, there must always be a first time and our story begins promisingly and well-prepared:

Partly out of ambition, partly out of a desire for adventure, the Endurance traveled with very capable people and detailed planning about the duration of the expedition and likely delays. But as we already know, nothing is ever so easy, and we would not be here telling a story if everything had gone according to plan.

The area was going through one of its coldest periods to date, and thick blankets of ice prevented the journey from progressing. However, the worst was yet to come, these chunks of ice eventually trapped the ship for good, making any movement impossible.

Located in the center of the Weddell Sea, the nearest known outpost was 1,900 kilometers away. We are talking about large blocks of ice that move according to the wind, so collision between them was more than normal, not something the Endurance was prepared for.

The crew still had moments of hope, as they thought the ice would thaw and they could set sail again. However, they could not imagine spending nine months in these conditions and many more months trapped in the ice floe.

Survival was indispensable for them and much more than that, staying sane was a priority! However, we can see clearly how desperation comes from a lack of organization.

Despite the terrible conditions, Shackleton knew that each man was extremely useful and important to get back to port, so he assigned specific tasks for supplying the ship and training the dogs, this occupied the minds of all who trusted the leader and knew it was only a matter of time before they set sail again.

How to be a leader and achieve the common good?

Now in the middle of our story, we can see a second very important factor: the leader! Many would have given up after a while or left the responsibilities after they saw how things went wrong, but they were not Shackleton.

"For scientific leadership, the best is Scott; for traveling fast and efficiently, Amundsen; but when you are in a lost situation, when it seems there is no way out, get down on your knees and ask God that your boss is Shackleton. That was the man who cultivated the idea of crossing the Antarctic continent - on foot."

Seeing that actions needed to be taken so that the disorder would not proliferate and end the chances of survival, it was decided to camp on the ice floes and hope that the movement of the wind would help to find openings in the sea and release their 3 boats in search of help.

Shackleton demanded equal treatment for all, including himself, and created a harmonious environment, even for those who saw pride in some decisions he made and thought his idea of walking on the ice crusts in search of a closer approach to land was insane, he was respected and trusted by all.

They encountered many challenges along the way, from cracks in the ice to wounds, scarce food, thirst, and much more. However, they all worked for each other, even in the face of the canine sacrifices that eventually happened, no one went crazy, because there was team integration and unwavering leadership.

Is it possible to overcome fear?

The cracks in the ice took time but they did happen, it gave the crew a chance to navigate towards the remote island called Elephant, many no longer could continue and the risk of sailing together would be enormous, so it was decided that 5 men would leave for South Georgia in search of help.

At this stage, there are 2 crucial feelings: fear and trust. Fear of not being able to survive, fear of loneliness, fear of their own fear and trust not only in themselves but in each other, in those 5 people on whom all their efforts depended.

These are two extremely powerful emotions and when misdirected they can defeat an entire team, but when well applied they generate courage and hope to not give up. The latest is the way they all approached their emotions.

“I learned that courage was not the absence of fear, but the triumph over it. The brave man is not he who does not feel afraid, but he who conquers that fear.” - Nelson Mandela

The journey of the 5 members took much longer than expected, besides barely being able to locate themselves due to extensive fog, they encountered a violent sea, and upon reaching the island, getting off the boat without breaking it, was even more difficult. On May 10, 1916, they set foot on the island they had left 522 days before.

Exhausted and without the means to continue sailing, Shackleton once again had a difficult decision to make, they would have to cross the island on foot. By sea, it would be a journey of over 200 kilometers, by land it would be 45.

So they split up once again and 3 of the 5, including the commander, left for Leith Harbour which was in the southern part of the island. The road was tricky, and they had to turn back several times due to the extreme cold or the mountainous terrain. But they knew that giving up was not an option!

After a few days, they arrived and managed to ask local workers for help along with celebrations, anxiety was also fitting as they still had to return to pick up the rest of the crew on Elephant Island. This process took about three months due to the ice floes that prevented their arrival.

There were three failed attempts to rescue them, a whirlwind of feelings both from the captain taking responsibility for what happened and, also, from those who were anxious and hopeful for the day they would leave.

At the end of August, they achieved not the initial objective of the trip, but much more. They discovered within themselves a will to live and abilities that they had never imagined before by managing to save themselves and everyone else! Sometimes our achievements can be more profound than we initially envisioned.

Biographies and books to draw inspiration

Robert Fischer's "Knight in Rusty Armor" brings the reality of fear, how it can prevent us from accomplishing great things, and how we can get around it.

In Brené Brown's "Daring Greatly" we once again see fear as a means of imprisonment and how we can let go of this feeling.

Finally, get to know the story of "Leonardo da Vinci" by Walter Isaacson, showing the naked truth of an idolized genius and his reality. As with Shackleton's journey, the reality behind the fantastic feats shows that, in the end, we are all capable of great things.

What can I take with me from this story?

Thank you very much for checking out this summary on our platform! We hope you found it useful for your personal and professional growth.

Leave your opinion in the comments, your feedback is very important to us!

Also, if you want to know this story in full, click on the book cover below: 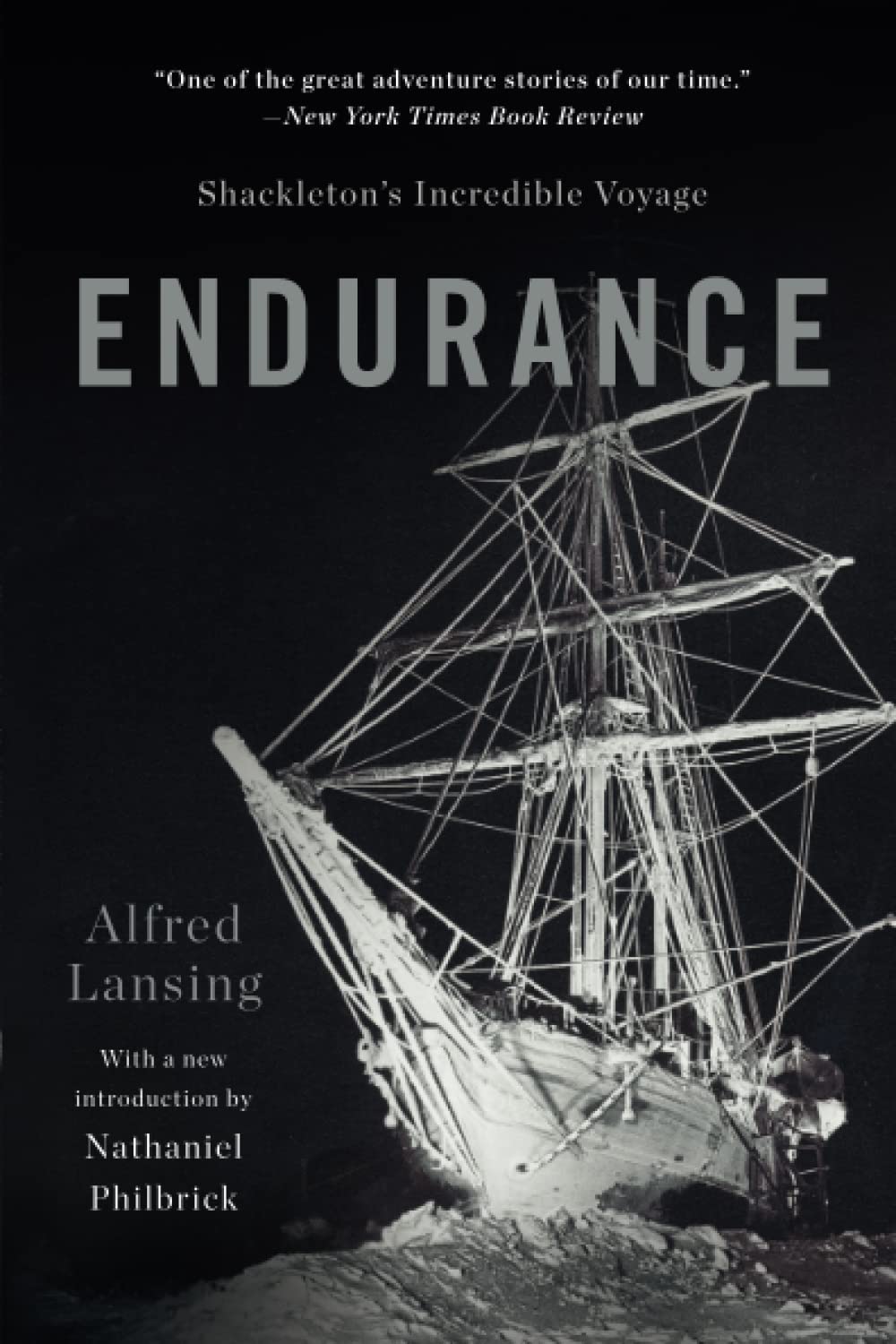