Learn here all the secrets of victorious leadership and how this targeted training can help you overcome obstacles, barriers and difficulties.

A combat action within a war is perhaps the most stressful environment a human being can face. Therefore, for a leader to remain calm and make the best decisions in this context, it takes a lot of discipline and efficient techniques.

In "Extreme Ownership", two Navy SEAL officers, Jocko Willink and Leif Babin, who served together during the Iraq War, demonstrate how to apply powerful leadership principles in both their business and their lives.

In this PocketBook, we will address these fundamental principles to lead your business toward success. You're not going to miss this one, are you?

Published in 2015 in the United States, "Extreme Ownership: How U. S Navy SEALs Lead and Win" has topped the list of top sellers by the Wall Street Journal and has since then sold more than 1 million copies worldwide.

Divided into three major parts, the book brings several stories experienced by the authors Jocko Willink and Leif Babin, and shows how the principles of leadership were useful in moments of extreme intensity and dynamism.

Who are Jocko Willink and Leif Babin?

Leif Babin and Jocko Willink served together as officers in the Battle of Ramadi during the Iraq War. The unit they led was the one that received the most decorations during the war.

After returning to the United States, they developed and conducted leadership training for officers who would be sent to the Afghan War.

Nowadays, they are partners in the company they founded, Echelon Front, which provides leadership advice.

Every year, Jocko Willink makes a list of books he believes are important. Some of the recommended books are:

"Extreme Ownership" is recommended for leaders who want to learn how to overcome the company's difficulties with tactics that were used on the battlefield and that were responsible for ensuring the victory of the team as a whole.

What are the key points of the book "Extreme Ownership"?

Download the "Extreme Ownership" Book Summary in PDF for free

In the first part of the book, the authors Jocko Willink and Leif Babin talk about mindset that leaders need to acquire in order to inspire their commanders to reach their full potential.

Initially, the principle of "Extreme Ownership" is defined, which gives the book its name.

But what would this sense of ownership be like? According to the military, leaders must own the mistakes and failures committed by the team, recognizing them and taking responsibility for developing a plan to overcome them.

The leader is responsible for explaining the strategic mission, developing the tactics, and ensuring all the training and resources necessary for the team to perform the task with excellence.

The authors state that "there are no bad teams, only bad leaders". The best leaders are never satisfied. They should always seek improvement and, moreover, must implement that mentality in their team.

For example, if a team member is not performing satisfactorily and the leader accepts this fact, the tendency is that unsatisfactory result becomes the team standard, since the leader sees this type of delivery as acceptable.

That's why it's so important that leaders are inspirational.

To inspire his employees, the leader must first be inspired. He must believe strongly in his purpose, only in this way he will be able to persuade his team to continue and evolve even in the most complicated moments.

At the end of the segment, Willink and Babin talk about the importance of humility. They explain that the ego can disrupt judgment and decision making. If you strive harder to seek personal recognition than to develop the team, the chances of failure are great.

This idea is similar to the concept of "level 5 leadership", developed by Jim Collins in "Good to Great". He states that the best leaders are those who combine extreme humility with strong professional will.

In our summary of this classic, we explain more about how this principle of leadership works.

The Laws of Combat

In this part of the book "Extreme Ownership", the officers Jocko Willink and Leif Babin show how the ideas behind important military tactics can be used in other circumstances, allowing better team performance and mastery.

Let's talk about them, which are called Laws of Combat:

The first idea addressed is teamwork, exemplified in the military world by the tactic of "covering" your allies so they can move forward.

With that in mind, it's important to reduce barriers between teams as this makes it easier for the departments to understand what they depend on and what depends on them to get their maximum performance.

If the teams are not aligned, they may end up working against each other, damaging the final outcome of the project.

The authors Jocko Willink and Leif Babin explain that combat alone already has a very high level of complexity. Keeping what is possible in its simplest form is therefore crucial to the success of the mission.

Plans should be communicated in a way that is simple, clear and succinct. Everyone involved must be able to understand their role and influence in the larger picture, which increases motivation.

Even the most experienced leaders can get complicated if they try to tackle and solve various problems at the same time. There is a chance to fail on all fronts, or not to do a satisfactory job on some of the tasks.

In a fight, many problems can arise simultaneously. In this context, the authors report that they used a strategy that consisted of relaxing, paying attention to what is going on around them, and then making a decision.

This method can also be used in other circumstances. To do so, Willink and Babin suggest in the book "Extreme Ownership" the following steps to be taken by the leader:

Another key component to success is what the authors Jocko Willink and Leif Babin call decentralized command. They explain that it is very difficult to manage well groups larger than six to ten people. Therefore, it is interesting to divide the team into smaller teams with a leader in each of them.

In chaotic and dynamic environments that require rapid action, it is essential for leaders at all levels to be empowered to make decisions, always in accordance with the main mission of the project and respecting its limits of authority.

In the final part of the book "Extreme Ownership", Jocko Willink and Leif Babin develop over the balance necessary for leaders always keep the advantage and continue provide the necessary conditions for its staff to develop in search of goals.

Initially, they explain the importance of leading "up" and "down" the chain of command. Every respected leader should plan and execute tasks, projects, and operations to better target the team according to the strategic goal.

But, according to the authors, the leaders who stand out most are those who also help their superiors in their leadership tasks.

If you think your leader is not providing you with the support that you think is necessary, do not blame him. Instead, evaluate what you can do to enlighten, educate, influence, or persuade that person to give you what you need.

Finally, they show that researching and gathering as much information as possible, is a fundamental leadership practice. However, often in a chaotic and uncertain context, there is no time to gather so much information.

Therefore, it is essential that leaders develop the ability to quickly decide on a situation that he is evolving. To do this, you must understand that there is no 100% certainty, but you still have to trust your decision and believe in it!

In "Leadership Gold", author John C. Maxwell defends the idea that we need to develop self-awareness to become true leaders. It will illuminate the habits and behaviors that lead us to overcome obstacles.

In the book "The Effective Executive", Peter F. Drucker clarifies that executives can be brilliant, imaginative and informed, yet still be inefficient. Effective executives are systematic. They work hard in the right areas and their results define them.

Finally, in the recommended "Everybody Matters", authors Bob Chapman and Raj Sisodia explore how true leaders must continually study to develop and develop those around them, so that they also become excellent leaders who believe and value people.

So, how can I be a better leader?

Authors Jocko Willink and Leif Babin suggest in the book "Extreme Ownership" some simple practices that define a true leader:

Did you like this summary of the book "Extreme Ownership"?

We hope you enjoyed our summary and are able to develop your leadership by following the teachings of authors Jocko Willink and Leif Babin. Leave your opinion in the comments, your feedback is very important to us! 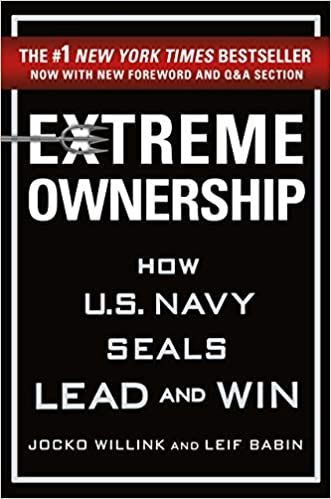