It is possible to increase profits and be happy at the same time! Discover the methods to become happy at work and how to make your work environment and employees more satisfied.

Usually, the company's mission, vision, and values are depicted on the wall, and the boss motivate the team saying "do it!". But in the book "Happiness Is Profitable", Márcio Fernandes explains the importance of keeping your employees happy and how this can motivate them naturally, increasing your profits consequently.

When people are happy, they tend to do their tasks in a more enjoyable way without complaint. This is because they believe in what they are doing, in the value and mission of the company!

This obviously makes the company benefit because the professional will be finding a purpose for their work. But it isn't as easy thing to implement in your company, it evolves a culture change, and for that the leader must be this change.

Got interested to be this leader? Stay with us in this summary to discover how!

About the book "Felicidade Dá Lucro"

The book "Happiness Is Profitable", in a free English translation from Portuguese, was released in 2015. It shows how the CEO of Elektro, Márcio Fernandes, had put into practice a management philosophy, which has the following concept: "happiness at work leads to an improvement in profitability of business".

This book has 256 pages divided into nine chapters. Combining a clear and objective language with his experience, Márcio proves that any professional or company can reach excellence through his new management philosophy. Profit is not objective, but consequence of happiness.

About the author Márcio Fernandes

Márcio Fernandes, is a Brazilian born in Campinas, he holds a degree in business administration from PUC-Campinas and an MBA in Controlling from FEA-USP. In 2004, he joined Elektro as a controller manager. In 2011, he assumed the position of president.

In 2012, Elektro won in an unprecedented way, the first position of Guia Você S/A, retaining the title of the best company of the year, with a happiness index of 92.5%. In 2015, when the satisfaction index reached 99%, Elektro was voted Best Company to Work in Latin America by Great Place to Work.

This is one of the must-read books for most professionals and company leaders. In "Happiness Is Profitable", Márcio Fernandes reinforces the idea that results happen because people believe in what they are doing and want to be there.

This is only possible with a philosophy of bottom up. This concept is exemplified in a cycle of believing - practicing - improving - sharing. This is a very interesting and practical reading!

There are those who only have money. There are also those who have happiness, but not money.

The purpose of Márcio's management model is to make the company's employees happy at work. By doing so, they will achieve better results, bringing profit to the company.

For the author, the values and vision of the company should be aligned with those of the collaborators.

For example, in a situation where there is convergence between the purposes of the person and the company, suppose that a collaborator holds the position of engineer, but he wishes to work in the area of human resources.

According to Márcio Fernandes, open dialogue has to exist:

"We encourage him not only to talk, but to document that will in a development plan. So he has the possibility to be prepared for it. He can apply for a vacancy that can open, with his manager knowing this. And with the certainty that he will not be harmed by this clarity."

When he has a development plan, he will prepare to conquer this vacancy in an independent way, that is, the empowerment is on his own.

When he reaches the desired position, the employee will feel fulfilled and happy, so the company will profit from it. Profit is obtained through the happiness of the individuals of the company.

One of the most important factors is changing the company's current culture. If you tell the shareholders that you want to change the culture of the company because you want to make people happier, you will surely fail.

Now, saying that being a happier person will produce more, soon, will lead to increase of profits, the conversation become much more interesting, right?

Looking from the side of the employees, regardless the change is for better or worse, there will always be doubts on the part of the team, but this is natural and is part of any process of adapting the company.

According to Márcio Fernandes, when your team starts to change their mentality, is the time that doubts arise. The main idea here is to face this fear of change and pass through it. There is an excerpt that illustrates this idea: "When doubts disappear, people go deep."

Overview: How a CEO Should Act

As they are responsible for the company's bottom line, the feeling of loneliness is pointed out as a side effect of becoming a CEO. According to "Happiness Is Profitable", even if you have your limited time, you have to give it up to keep up with people.

It's like choosing not to be a full-time leader but rather accept that leadership is situational. For example, when he comes to a workstation, the boss must accept being led by an electrician, because this professional is who will ensure safety in that place, being the reference.

CEOs need to actively participate in conferences with the entire team, from the board to trainees. It is important to stay on top of what is happening even in the lower layers of the company.

For this, talking openly with people, including in their workplace, is essential, as this will make people closer to him. You might think: "This will mess up the charge on the team."

The specialist Márcio Fernandes says that:

"Happiness is not being permissive. We do not offer goodies, easy money, we are not nice. We are righteous. People have a natural predilection for justice. When you treat someone with transparency and truth, the response you receive is commitment. What we propose is a very advantageous philosophy for everyone."

A company must continually provide the market with goods or services that surprise and are competitive, that is, lower costs combined with higher quality. This is, in the author's opinion, the biggest corporate aspiration.

These aspects are obtained through continuous improvement. Márcio Fernandes explains:

"The company that has happy collaborators, manages to engage them more naturally and spontaneously in the processes of continuous improvement."

So, we can now understand the 4 pillars of Márcio's philosophy, which are: believe, practice, improve and share.

To begin with, we must believe and practice the philosophy proposed, so we can achieve improvement.

According to the author, after the doubt moment, employees note that they are more valued and important, that is, they begin to believe in themselves, having the opportunity to practice their skills.

From there, improvement indicators will increase. So we already have three pillars: believe, practice and improve.

The fourth pillar is the apex of philosophy, called sharing. After completing the 3 pillars, the author says that the individual comes to another level of consciousness in relation to his capacity.

By sharing, people learn even more, thus forming a lasting circle. Continuous improvement occurs from the inside to the outside, it can not be imposed. Márcio says:

"Everything is born and develops from people and for people."

"The Leadership Pipeline", written by Ram Charan, Stephen Drotter and James Noel, says that the transition is much more focused on values than on skills. As leaders of an institution, they must be long-term thinkers and visionaries.

In the book by the Brazilian businessman Flávio Augusto, "Value Generation", is shows how, instead of just working for capital, it is important to generate value for clients. By generating value in other people's lives, they will generate value for you.

In the book "Focus", the author Daniel Goleman, says that every effective leader must focus the company's attention where it is most needed and productive. Pay attention to your behaviors and the effects of your actions. Leadership requires knowing your values and communicating your vision to inspire and motivate others.

If you seek happiness, you must first come out of inertia. Take responsibility in your life. Stop saying that others are guilty of the events on your journey.

There is no separation between personal and professional life. We are the same person, unique and integrated, inside and outside work. Thus, when we become more efficient leaders, we also become better friends and parents, for example.

Don't forget to apply the 4 pillars quoted by Márcio Fernandes, always being clear and transparent with your team. Make them trust on you and believe on their work.

Did you like this summary of the book "Felicidade Dá Lucro"?

Are you ready to change your company's culture? Did you find this content useful for you? Leave your feedback in the comments!

If you want to go deeper into the subject, don't hesitate to click on the image below for purchase the book's full edition: 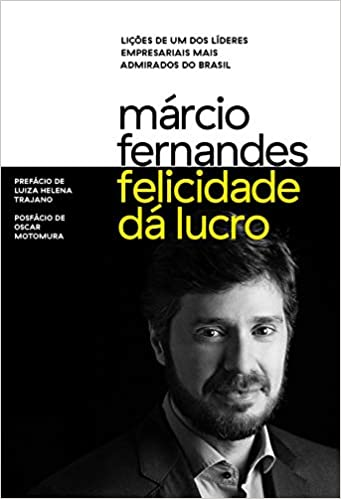