Thinking of venturing on the Stock Exchange? Learn, in the history of the infamous New York Stock Exchange, on Wall Street, the great illegality that revolutionized the stock market.

Stressed people screaming while talking on the phone. This is more or less the stereotype about stock market professionals that films, series, and the press have put in our minds.

However, there is much more than appearances that show us about this world that involves so much money and kindles the dreams, greed, and envy of so many people.

What are the secrets behind the mechanism in which the agile financial market operates? How can some succeed in such a hectic world as the stock market?

There's so much to learn of this place, where the 'money never sleeps'!

So stay with us in this summary to find out a little of what Michael Lewis has to teach us in this regard.

About the book "Flash Boys: A Wall Street Revolt"

Over eight chapters, Michael Lewis takes us on a journey into the hectic and not so honest or fair world of Wall Street.

About the author Michael Lewis

Michael Lewis, born in New Orleans, USA, holds a master's degree in economics from the London School of Economics.

Author of other titles such as "The Fifth Risk" and "The Undo Project," Lewis also writes for publications such as Bloomberg News, The New York Times Magazine, The New Yorker, and Vanity Fair.

This book is suitable for stock market enthusiasts who want to know better how it works and find out the mechanisms behind the financial market.

In this summary, we will know in more detail how this information is worked by the author in the book. If I were you, I wouldn't lose it!

Download the "Flash Boys" Book Summary in PDF for free

Overview: Technology on the stock exchange

"Before 2007, the speed with which a broker could trade had human limits. In 2007, exchanges became just heaps of computers in data processing centers. The speed with which operations were performed was no longer limited by people.", reports the book.

One thing that highlights the importance of speed made possible by technology on the stock market is the fact that Spivey, a character quoted in the book, has taken the trouble to design a meticulous, difficult, risky, and eccentric fiber-optic project to improve the speed of operations and profit a lot from it.

Some of the technology effects on the stock market portrayed by Flash Boys are:

This is how dark pools, private exchanges run by major brokers, are presented in the book, as they were based on certain subterfuges to function and profit.

Overview: The manipulation of markets

"I understood that markets are manipulated. And I knew it had to do with technology. That the answer was under the technological surface. I had absolutely no idea where. But when I had this light, I saw that the only way to find out what was going on was to dive under the surface."

This phrase is attributed to the operator portrayed in the book, Brad Katsuyama when he realized that a colleague from another company, like him, was doing poorly buying and selling stocks even though he used technology provided by large firms.

However, even before its conclusion, Brad had already started asking this series of questions, which were presented by the book's author in the publication:

A starting point given by the book to understand this or to raise even more doubts appears in the passage in which the book cites a denunciation made by New York state senator Charles Schumer.

Such a complaint reports that the stock market accelerated by a fraction of a second according to information about buy and sell orders to traders before these data were publicly disclosed, provided they paid a certain amount.

To find answers to his questions, one of the tactics chosen by Brad was to trade stocks without the purpose of profit, but in order to test theories. In their experiments, their team concluded that:

"Madness" to understand the mechanism

Going against common sense, they created a program to embed delays in orders to the shorter arrival times, so that they would arrive at the same time as the longer ones.

When they went to test the program, the screens turned green, meaning that they managed to catch the whole lot of actions they tried. The implied conclusion was that someone took advantage of stock market orders arriving at different times to profit from it.

Rather than get in the mood and profit from his discovery, Brad chose the noblest and most difficult way out: he decided that they would make an educational campaign about what he understood. And this came in part through a program called Thor, which served to protect investors from the pitfalls of Wall Street.

Later Brad and his bank hired product manager John Schwall, an eccentric, detail-obsessed fellow. It was after meeting Brad that he concluded some things.

Brad also came to new conclusions through Schwall's research work: He noted that all the big Wall Street banks took advantage of speed differences in the market for what the book calls "snapping up their prey."

Worst of all, the technology professionals involved in this mechanism seemed to have no idea what they were involved in, unaware of the unfairness of the system to which their work was of great relevance.

Brad and his team knew the Wall Street scams closely and were intended to give the American stock market fairness and equity. The way out of this would be the creation of a new scholarship. But that didn't go free for Brad: he had to resign from the bank where he worked.

When he had a meeting with David Einhorn, Brad found an almost obvious argument for his venture: creating a single stock exchange to take care of investor interests, protecting them against predators on Wall Street.

The structuring of a new scholarship

The new exchange was called Investors Exchange and was abbreviated to IEX. To get her to go as desired, Brad hired specialized professionals named in the book of Masters of the Riddle, whose work involved:

The results of the analysis of the Riddler Masters

In their analysis, they saw the existence of three activities that resulted in a great deal of unfair and unfair negotiations, which depended on speed:

A strategy for IEX to do its job

For the new exchange to be truly safe for everyone, Brad and his team needed to eliminate the advantages of high-frequency traders since they could not stop them from trading on it.

Since they could not prevent some people from obtaining information before others, the solution was to control the number of moves they could make to make money on this inside data.

After much thought, Brad and his team realized that by placing the new exchange's computer well away from where traders were connecting to it, it required that those interested in trading be within a good distance of it, most of the speed advantages. would be eliminated.

IEX was born, however, as might be expected for a stock market that was meant to revolutionize the financial market, things were much more complicated in practice than they appeared to be in theory.

In "The Intelligent Investor" Benjamin Graham explains how to invest in stocks and the characteristics of an investor who knows how to play the stock market: discipline and consistency.

Author Jill Schlesinger, in her book, "The Dumb Things Smart People Do With Their Money" warns the reader: Financial advice must come from the right people. If you have problems with money, it is advisable to seek a financial advisor to help you plan your spending.

Finally, in "Unshakeable: Your Financial Freedom Playbook" Tony Robbins gives valuable advice: If you are not careful, taxes can easily eliminate 30% or more of your return on investment. in the net amount that you will actually be able to keep.

Some steps you can take to exercise the book's teachings in a practical way in your life include:

Did you like this summary of the book "Flash Boys: a Wall Street Revolt"?

Now that we have reached the end of this Flash Boys appetizer, you can get a sense of what the book offers. So, what do you think? Does the work seem interesting to you? Feel like buying? Just click on the images: 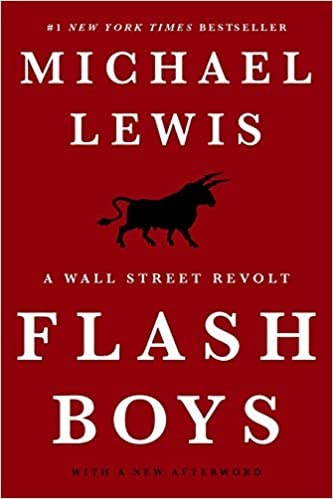