From the Ground Up - Howard Schultz

Learn powerful leadership lessons from the former President and CEO of Starbucks, which has made this coffee franchise one of the largest in the world.

Howard Schultz presents in "From the Ground Up" that exists something far more precious and exciting than individual success: using your skills to transform other people's lives.

Having a transformative purpose is an essential characteristic of a leader.

Collaboration, empathy, education, and responsibility are values that lead your group of employees to generate better results.

In today's summary, we'll talk about one of the greatest businessmen who used his knowledge to grow his partners and thousands of people around the world.

Are you ready to take the lessons of the former president and CEO of Starbucks and become the best version of yourself?

About the book "From the Ground Up"

"From the Ground Up: A Journey to Reimagine the Promise of America" is a biography of Starbucks' former president and CEO Howard Schultz and how the company moved from 6 stores and 100 customers to one of the world's largest franchises with more than 70, 000 stores in 49 different countries.

Launched in 2019, the work was highly praised by influential personalities from around the world, including Bill Gates, Serena Williams, and Mark Cuban, and was considered one of Amazon's biggest bestsellers.

About the author Howard Schultz

Howard Schultz is a former president and executive director officer of Starbucks. In 1975, he was the first in his family to earn a college degree from Northern Michigan University.

He left Starbucks in 2018 and today leads the Schultz Family Foundation, along with his wife, Sheri, who helps young and veterans raise educational and career opportunities.

Howard lives in Seattle with his wife and is the father of two children.

The book "From the Ground Up" is ideal for every leader who wants to succeed in their professional and personal lives. In addition, the life story of Howard Schultz and his Starbucks company is meant to inspire all leaders and citizens to learn from their mistakes and be the best version of themselves.

Main ideas of the book "From the Ground Up"

Among the content presented in the book, we have gathered the best lessons about the author so that you can develop the skills and knowledge to exercise effective leadership.

The main points of the book, summarized in some small sentences, are these:

So, let's have some coffee?

The first part of the book, "From the Ground Up", tells how it all began. Howard Schultz says his childhood was not easy and he had traumatic moments. However, he discovered the paradise where he met himself: the field of his ideas projects.

When he moved to Seattle, he had the opportunity to start working at Starbucks, where he could grow professionally. At the time, Starbucks was well known for making an exceptional coffee, but Howard thought beyond.

"Starbucks can be a great experience, not just a quality coffee roaster and a retail store"

His enthusiasm, however, was only in himself, and the founders did not believe in his vision.

A year later, Howard Schultz made the decision to control his own destiny and started his own espresso company, called Il Giornale.

During that journey, he received a lot of "no's" from investors to open his firm, but also met new friends who believed in his goal, including Sheri, whom he married.

It was not as easy as it seemed. With no job and only a dream in his hands, he woke up everyday hoping it would be a good day. But, as a good leader, he never gave up.

When he founded Il Giornale, the company began to generate more and more profit, and in 1987 he enlisted the help of Bill Gates to buy Starbucks Coffee Company.

His new company was renamed to Starbucks Corporation.

Although the company grew, he never gave up the values that a leader possesses: ethics, integrity, support, teamwork, care for each member, respect and loyalty.

In 1992, Starbucks already had a market value of $ 250 million, with 165 stores scattered throughout the country. A few years later, the company further explored its horizons, opening stores in Japan, the United Kingdom, Singapore, New Zealand, Malaysia, and China.

Howard has a responsibility to Starbucks that goes way beyond making money. Starbucks exists for a much larger purpose.

His intentions are to apply the company's profits in a transforming purpose to his audience in a balanced way. It is this kind of leadership that moves the world, as well as changing the course of your company, it also changes the history of society for good.

"A company is only as strong as its people."

Starbucks has invested in several schools, including its original "College Achievement Plan" program, which has contributed to the training of several students, including partners, through an online platform.

However, leadership is not always a bed of roses. In "From the Ground Up", Howard Schultz shares one of his greatest professional regrets: giving up the Seattle SuperSonics.

The intentions were not bad; he had tried everything to save the economy of the Sonics and thought that by selling it he would be doing the best for the future of the NBA team. This decision, for him, is a wound that will not heal.

Howard Schultz started from the idea that a company's social engagement should change the country. And he realized that the world still has a lot of injustice. So he came to the conclusion that debates on social issues should be encouraged in order to bring people together.

His "Race Together" campaign, which aimed to fight against ethnic injustice, generated much controversy and criticism everywhere. He understood that empathy does not mean feeling the struggle that social minorities go through every day.

With that, he sought to police himself more, to educate himself, to become aware of his privileges and to give voice to this group of people to express their experiences.

He believes that business can help innovation, reinvent things, and solve problems. Moreover, it can educate people, empower them, inform them and make them self-reliant.

According to Howard, it is important that this initiative starts voluntarily from the public and private sectors, united for a greater good. Together, government and companies can exchange learning and work with more innovation and fiscal responsibility in the name of moral purpose and high performance.

The best version of us

Howard says the Starbucks story revolves around creating a sense of belonging in people.

Even with so many achievements, investments and commitment to the population, he aims more and more to create new things.

In addition, he believes that a leader can and should continually strive to be a better convener, collaborator, listener, empathic, educator, innovator, volunteer, and sharer to achieve his goals.

For John C. Maxwell, author of the "Leadership Gold", the best leaders are those who know how to listen. Listeners know what is happening because they are attentive. They learn better than others because they absorb from various places.

In addition, good listeners have the ability to better see the strengths and weaknesses of other people.

Delving into the question of how to motivate teams and develop leadership, the book "Start with Why: How Great Leaders Inspire Everyone to Take Action" is meant for those who long to inspire others and succeed at work.

In this journey, the author highlights the importance of knowing his "why", that is, his purpose and his final mission.

Finally, in the book "Vai um Cafezinho?", The author reports how Luciana Medeiros brought to Brazil one of the largest franchises in the world, Starbucks.

At Starbucks, Howard Schultz takes the lead with his partners and coworkers based on the following questions you can ask your business:

We have seen that leadership can go beyond just generating profits. Having a massive transforming purpose can attract more audiences and generate more results.

Also, keep in mind what the author said about how a good leader should be. Stay true to yourself and make decisions, never run away from your values.

Did you like this summary of the book "From the Ground Up"?

Very inspiring, isn't it? Tell us what you think of this summary. Your feedback inspires us to produce better and better content for you.

Oh, and do not forget that the book is available for purchase by clicking on the image. Thus, you can get in full all the teachings of the guy who used his business to turn people. 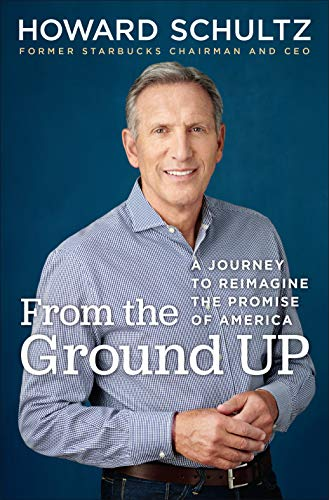