Do you know what to expect from the future? Learn in this summary about what brought us here and where we are going!

Are we living the future that the past predicted? In this summary of the book "Future Shock" you will discover what awaits you in the future and how to adapt to the new era.

The way we consume a product, the way we live, what we want, even our relationship patterns have changed.

So, if we had Alvin's ability to predict the future, wouldn't we have been better prepared for it? And what would we do based on these predictions?

Just as he was able to analyze information about the present and evaluate trends about the future, so maybe you can too!

The book was published in 1970 and carried about to analyze how the future would be based on what could be observed in the present.

The most incredible thing is, that although it seems outdated, it brings good reflections on how the changes in the world have impacted people's lives.

According to Alvin Toffler, technological and social change would overwhelm people. Consequently, they would suffer from stress and disorientation.

These changes were predicted as a consequence of a new era called by the author of "super-industrial". An era that would impact the reality of everything we know.

Who was Alvin Toffler?

Alvin Toffler was a futurist, born in 1928. According to him, change is not simply necessary for life, it is life. Thus, even in the 60s, the author already predicted what our current future would be like.

Alvin is also famous for the works "The Third Wave" and "Power Shift", both part of the trilogy that, together with "Future Shock", sold millions of copies.

Surprisingly, even though he never graduated from university, Toffler became a visiting professor at Cornell University.

The book is suitable for people who want to understand more about how the past and the present impact the future and how to deal with those impacts.

What are the key ideas of the book "Future Shock"?

Download the "Future Shock" Book Summary in PDF for free

Fear of the future

The shock of the future, for Alvin Toffler, is a new disease that haunts the human being causing disorientation and progressive incompetence. This new disease is caused by the accelerated rate of change in society. It is like a culture shock, but inside the same society.

Also, this constant move from the new to the old leads to changes in habit, belief and self-image.

And we are not only talking about technological shifts, but also about social dynamics.

However, if technology is the engine of accelerated change, information is its fuel. So, the more information, the more change. Knowledge is not just power, it is transformation itself.

Therefore, in order to not be overwhelmed, it's important to increase the adaptability and look for new roots. But even before doing that, we need to understand how these transformations affect us and accept them.

According to Alvin Toffler the way people treat things shows what their values and judgment are. However, individuals increasingly treat objects as disposable, because of no longer being attached to a permanent state, but to a transient state.

In this way, it's developed a "disposable" mentality that is reflected in behaviors. At that point, people and relationships end up becoming disposable as well.

Society's tendency is to lose the bond with everything and everyone. All aspects of life will become ephemeral.

This does not mean that every change is bad, just that all have consequences. And some, although seemingly insignificant, impact in mentality and in the way of living.

Thus is born Adhocracy: a temporary, variable and adaptive system. It is related to the establishment of a group of people, with different skills, professions and knowledge.

For Alvin Toffler, the tendency is that this context will lead to the collapse not only of consolidated structures such as hierarchy, but even religious ones.

It's also pointed that the increase in the suicide rate itself shows that this fast pace of detachment can lead to a feeling of "not belonging".

The book "Future Shock" points out that when people pay attention to what is being developed by companies and academia, they improve the idea of what the future will be like.

The influence on the climate, the ability to develop new sources of energy and new materials already indicates what the next changes will be.

We live in an era in which the human body itself has undergone several changes. Alvin Toffler envisaged the integration of man-machine or man and other living tissues. The first is already a reality, just think about the exoskeletons. Although they are not common now, one day they will be.

This way the author claims that someday, someone will have this done, the only problem is if the population will be physically or mentally prepared.

For Toffler, the more we innovate, the closer we get to the dangers of being transient, and the more we rely on technology to try to predict the unknown. Thus, we can reach the point of doubting our reality, having trouble distinguishing what is real and what is an illusion.

The educational system, politics, economic theory, medicine and international relations are also changing rapidly. Everything helps to change the known reality and the feeling of impermanence of knowledge.

The book "Future Shock" shows how Alvin Toffler predicted virtual reality and how it could change the notions of risk and rewards. Why go walking outdoors if you can use a simulation of the same thing without leaving your house?

Regarding the family environment, the author predicts that there will be a breakdown of families, just so that they can reconnect in another way. At this point, he highlights the ability that technology will give to choose the baby's gender, new ways of conceiving or programming the child's IQ.

Toffler discusses the various possibilities of formatting families, love relationships and marriages, citing how people will prefer what is most rewarding and temporary.

If our ancestors suffered from the lack of choices, we will suffer from the excess of them. For Alvin Toffler, the human being will reach the point of feeling paralyzed by the great amount of possibilities.

At this point, individuality and diversity will be at risk, as everything will be created to manipulate you. The absence of standards will push people in several directions, always trying to attract them to the current news. That way, people will feel more lost.

Excessive freedom would lead people to pursue different lifestyles simply because they can, without even thinking if they want to. This, in turn, would increase the gap between generations, as well as the number of cases of mental illness.

For him, the industry itself would feed a type of lifestyle to be consumed at that time. That's because most of us are desperate to find instructions on how to live life.

Turning life into a product

The book "Future Shock" states that people from the future will experience a constant identity crisis. To compensate, they would live more selfishly, always focusing on the search for that "me".

At this point, we can argue that society always adapts to everything. But Toffler questions precisely this human being's ability to adapt.

Are you really adapted to the whole modern world or do you just think you are? Have you felt the desire to change your life?

Well, these were symptoms that Alvin Toffler predicted that people would experience due to the excess of changes. All this news can end up overloading the nervous system, leading us to an internal dispute with the environment in which we live.

Thus, humanity ends its story as started: a system with limited capacity of change that will culminate in a future shock. This is because our senses will be bombarded - they already are - by the excess of information.

At that point, we become the victims of our own future, of our own desire for constant change.

In the author's view the solution to these problems would be to learn to accept changes while creating zones of personal stability.

The point is that a society which is living in a Technocracy needs to be rehumanized.

The education revolution could help to spread the knowledge that would make us grow or become the factor that will separate us once and for all.

Nowadays, even knowledge has become disposable!

Thus, Toffler ends his book by saying that this book will accomplish its purpose as it helps to create a way to control change and guide this revolution that comes.

For Tom Chatfield, there is a close relationship between humans and technology. In the book "How to Live in the Digital Age", he says that along with advances, the human being has shaped new technological tools and these, in turn, have shaped his behavior.

Daniel H. Pink, author of "A Whole New Mind", says that, thanks to the fusion of wealth, technology and increased connection of people through phones and the internet, the world is transitioning to a new era that goes beyond knowledge; it takes creativity, empathy and emotion.

In the book "Anxiety: How to Face the Evil of the Century", Augusto Cury teaches us how to face the evil that plagues modern psychology, and ends up making victims more and more quickly.

The book invites us to reflect on how the present will affect our future and how accelerated changes affect the world.

Thus, the best way to apply this knowledge is to make this reflection: What does the futurologist in you say about the future?

Did you like this summary of the book "Future Shock"?

Did you like this content? Remember to give your feedback in the comments, your opinion is very important to us!

Also, if you want to get access to the full content you can buy the book just clicking on the image below: 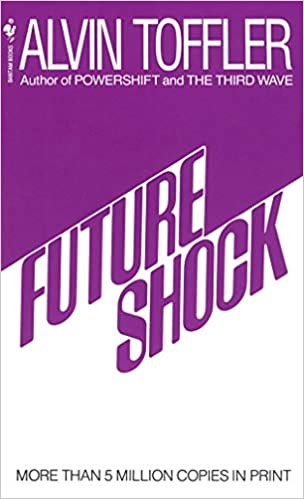