Stop and think! What are your goals? What excuses do you use for not pursuing your dreams? Find out why you can and should believe in your potential.

Before 40 years old, the creator of Wise Up (a language teaching company), Flávio Augusto, had already become a billionaire, but according to him, something was missing. Something to made him completely satisfied. And you will discover it in this book "Value Generation: Sharing Inspiration"!

"From the moment I realized I wanted something more, it was clear that a new chapter of my mission was being born. This time, people from all over the world, of all ages, could have access to a set of knowledge that I had developed and tested, producing significant results and transformations in my life".

In this book, you'll find tips, thoughts, and inspiration to let you thinking outside the box, stop following the crowd, and get out of the conventional model you've been trained for a lifetime. Became curious in knowing more? Follow us in this summary!

About the book "Geração de Valor 1"

Geração de Valor, "Value Generation: Sharing Inspiration" in a free translation to English, originally released in 2014 and written by Flávio Augusto da Silva, is a book that shows how people can and should believe in their potential.

It is a reference among the works of entrepreneurship. The book has 208 pages and many illustrations, which makes the reading very light and fluid. It is clear and objective. We can get a value teaching from each page we read.

About the author Flávio Augusto

Flávio Augusto da Silva, a Brazilian who was born in 1972 in the city of Rio de Janeiro, is an entrepreneur and writer, founder of Wise Up, owner of Orlando City Soccer Club and president of T-BDH Capital.

Flávio spent most of his childhood and adolescence studying at a public school in his neighborhood. When he turned 19, he started working in the commercial department of an English school.

Four years later, Flávio founded the Wise Up. In 2013, the company was bought by Abril Educação, for R$ 877 million. In that same year, he bought the Orlando City Soccer Club and currently the team is among the ten most valuable in America.

This book is suitable for individuals who aspire to success through entrepreneurship, thus living a freer life without selling their time to others.

The book brings up some important habits and posture that certainly will affect your career results. If you want to change to better, being more active and protagonist, this book is for you!

In this chapter of the book "Geração de Valor", the author was asked the following question:

"Flávio, if you were my age (18 years), with your knowledge and experience, what would you do?"

The answer was given in 10 topics:

According to Flávio, there are several problems with the answers he gave. Among them, we have the conventional education system, that is used in schools and universities, which does not prepare for any of this.

We've always been trained to get a job, says the author, and even worse, we end up selling our time. After all, competent or not, we all have the same amount of time, twenty-four hours a day.

Flávio Augusto points out that it is not easy to get out of the conventional model with the phrase below:

Here the author Flávio Augusto lists seven characteristics that people who are willing to be succeeded cannot have:

All of these seven listed habits should be avoided if you want to succeed. However, just as we can avoid them, we can acquire them. Whether at work, at home, with friends, do not let yourself be influenced by these habits. Prevent yourself.

Overview: To undertake it takes...

At this point of the book "Geração de Valor", the author Flávio Augusto shown some crucial abilities that all entrepreneur must have.

According to Forbes magazine, in Brazil there are 20 billionaires who have not yet reached 50 years old. Considering this 20, four of them earned their fortunes starting from scratch. Most of them are heirs of someone.

We can get a lot of important information from these data. It may not be easy to get there, but it is possible.

Overview: Do not be afraid

Here we have 5 kinds of fears and how they can be malefic for your development:

Have no fear! In spite of injustices, we have the capacity to overcome the obstacles that life has in store for us. The author Flávio Augusto completes:

"I would like very much to have the power to make you believe it, but this power is only in your hands."

In other words, only you have the ability to put you down, others can only do this if you allow it.

In this section of the book "Geração de Valor", it is addressed two models of lifestyle: the security and the freedom one.

If you are looking for security, you should be searching a good job, with a high salary and great benefits. Even if you don't care what your job will be, regardless of your vocation. What matters is the sense of security.

If you seek freedom, spending more than 40 hours a week on a job is an infeasible situation for you. The possibility of living wherever you want, traveling wherever and whenever you want and enjoying family are priorities.

People feel that they can not choose which of these two lifestyles they want to adopt for their lives. You have that choice, even though you inherit from the conventional model the search with all the strength for the security model.

Many speak of adopting the model of freedom, but they are afraid. It's not easy to get out of the conventional model, but that's what they did, those who conquered freedom. Reflect: How do you want to live your brief moments in this world?

In the book "Entrepreneurship", the author José Dornelas made some statements about new ideas, and for him, doesn't matter if they are unique, what matters is how someone uses and develop those ideas.

In "Who Says Elephants Can't Dance?", by Louis V. Gerstner, it is shown how to keep your company strong, using strategies applicable in all situations. For this, you will see from the rise of the company until the understanding that "elephants can also dance", which means that size is not a document when it comes to success.

The book "Originals", written by Adam Grant, presents insights to become a professional out of the curve, capable of having creative ideas when understanding that procrastination can be an ally. You will learn to open your mind, if you ask yourself about conventional ideas, you will be considered original.

Victorious thoughts are more likely to generate positive results. Whereas, trivial thoughts only produce trivial results. Start to apply those advices that was given in this summary and stop to commit the same errors, insist on them is waste of time!

To know more how you can build a successful career, start read more about big businessman. As Flávio Augusto says:

"It is only possible to learn to have a victorious mentality with the winners".

With the current technology, we have access to biographical contents and materials produced by these people. For starters, get out of compliance and sameness!

Did you like this summary of the book "Geração de Valor"?

What do you think about Flávio Augusto's work "Geração de Valor"? Leave your feedback for us to know your opinion and always offer the best content!

If you want to dig deeper into the subject, you can enjoy and purchase the book by clicking on the image below: 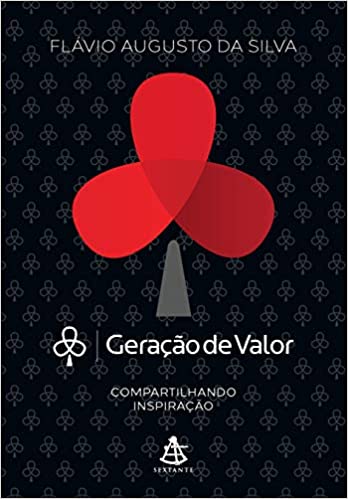