Find out how some companies managed to maintain their sustainable growth even when they faced extreme conditions of uncertainty!

Why do some companies thrive in uncertainty, even in chaos and others don't? In nine years of research, which turned into the book "Great by Choice", authors Jim Collins and Morten Hansen compared companies that have succeeded in unpredictable scenarios with their competitors who have succumbed.

From the contrast between them, key principles were identified to build a successful company in unpredictable times like today. The authors want to show that being the best is a decision, not a work of chance.

In this PocketBook we will further analyze the principles developed by the authors. You will not miss that, right? Stay with me!

About the book "Great by Choice"

Released in 2011, "Great by Choice" brings the results of the authors' 9-year researchs from the authors Jim Collins and Morten T. Hansen. As in "Good to Great", a comparative historical analysis was made.

The difference is that the evaluation was made considering, in addition to the performance and size of the companies, also the extreme conditions of their business environments.

About the authors Jim Collins and Morten T. Hansen

Jim Collins is the author or co-author of six books that, in total, have sold more than 10 million copies. Among them are the hits "Good to Great", "Built to Last" and "How the Mighty Fall".

Collins is currently giving lectures and consulting to executives from the corporate and social sectors.

Morten T. Hansen is a management professor at the University of California. He has been a Boston Consulting Group. Ph. D manager at the Stanford Graduate School of Business. He gives lectures and provides consulting services to companies around the world.

In addition, Morten is also the author of the book "Great at Work".

The content of the book "Great by Choice", set by the authors Jim Collins, Morten T. Hansen, will help people who seek to understand the strategies used by companies to survive and thrive, even in extreme and/or unstable conditions.

Main ideas of the book "Great by Choice"

In 2002, when the authors initiated the surveys, they selected for the study companies that had the following characteristics:

The companies that met these requirements were called by the authors of "10X Enterprises".

In addition, the highlights of the results of the studies conducted by Collins and Hansen are:

Download the "Great by Choice" Book Summary in PDF for free

The first principle addressed in the book is that of "10X Leaders". The authors identify them as responsible for conducting companies during a period of "real prosperity", in which they have exceeded at least ten times the growth rate of their sector.

These leaders understand that they are not able to predict all the obstacles they will encounter and that nothing can be taken for granted.

However, they are against the idea that luck, chance or other external factors are decisive for their success or failure.

In their research, the authors noted that 10X leaders share the following behaviors:

To explain this concept, the authors Jim Collins and Morten T. Hansen make an analogy with the race to reach the South Pole in 1912.

At the time, two expeditions started the pursuit for one of the most inhospitable land: one of them was led by the Englishman Robert Scott and the other by the Norwegian Roald Amundsen.

On his journey, Amundsen adopted a consistent progress regime: he never went too far in good weather, avoiding his team to exhaustion, but made up for it when the conditions were bad, keeping pace.

Scott, on the other hand, drove his crew to exhaustion on good weather days, and when the weather was difficult, he would not advance and stay in his tent protecting himself and complaining.

In the end, Amundsen's team reached their goal 34 days before Scott's team.

In the business context, maintaining a steady gait requires the company to maintain consistent performance over a long period of time.

This practice requires that the organization exhibits high growth in difficult times and limits development in times of need.

To determine a good 20-mile marathon, the authors selected the following characteristics:

According to the authors, a "revolver bullet" is a low-cost, low-risk, low-power experiment. The purpose of this test is to obtain empirical evidence of what actually works in that market.

Based on this evidence, you can focus the resources on what the authors call "cannonball", which is a product / service that demands great effort and will bring success to the company.

However, the authors point out that care must be taken when firing the cannonballs, because if they are not well calibrated they can have a huge impact on the health of the company.

Therefore, it is important to "calibrate" well the cannonballs using the revolver bullets as a test and way of learning.

Based on research, it was realized that 10X leaders are prudent regarding risk management. This has a lot to do with "productive paranoia", behavior that we defined earlier, do you remember?

Initially, the authors Jim Collins and Morten T. Hansen list in their book "Great by Choice", have three categories of risk that the best leaders are constantly paying attention to:

SMC is an acronym for "specific, methodical and consistent". An SMC recipe is a set of enduring operational practices that creates a replicable and consistent success formula.

The authors explain that a good SMC recipe should have the following characteristics:

Alignment with SMC revenue was essential for the 10X companies studied, especially for those operating within an uncertain and changing environment. In this way, they can maintain consistency and discipline.

In the highly recommended book "The Leadership Pipeline" Ram C. Stephen D. and James N. explain what are the 7 phases of leadership and 6 transitions between them that a leader must move to achieve an optimal level of management.

Eric Ries in the book "The Lean Startup", complements and expands the idea of principle 3 - first revolver bullets, then cannonballs. In the concept of Lean Startup it is possible to use technological resources to validate ideas and only then verify their viability.

The authors cite the concept of black swan, developed by Nassim Nicholas Taleb in his book "The Black Swan", as an event that almost nobody can predict.

However, it is important to note that it is very difficult to predict that a specific black swan will occur, but it is easy to imagine the likelihood that some black swan will happen.

We looked at the principles that made 10X companies achieve lasting success in the period studied, but how to do this in practice in your enterprise? The authors provide the following tips:

Based on these answers, formulate an SMC recipe, which will form a coherent system, capable of boosting your company's results, even in extreme conditions.

Did you like this summary of the book "Great by Choice"?

Did you like the book? Leave your feedback in the comments!

In addition, to learn more about the authors' ideas, the full version is available for purchase below: 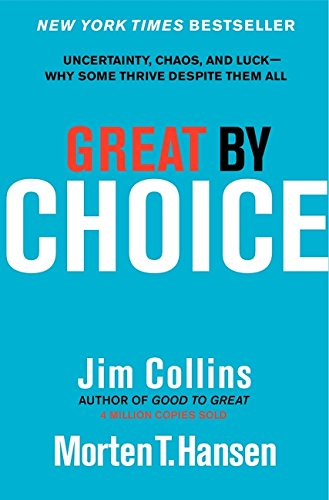