Grit is twice as important as talent on the road to success. Learn how to develop this personal skill to pursue your dreams!

If you don't know what to do to achieve success and you believe that talent is the only guarantee of obtaining satisfactory results for your personal and professional life, the book "Grit", by the author Angela Duckworth, was made for you.

She deconstructs the idea of innate talent to ensure success and is able to prove, through a lot of research and personal experiences, that having grit counts twice as much as having talent. This, the author calls the psychology of passion and perseverance.

Want to learn more about this personal skill? So keep reading this PocketBook!

About the book "Grit"

Angela Duckworth's book "Grit: The Power of Passion and Perseverance" was published by Scribner on May 3, 2016.

In this New York Times bestseller, the author reports that the secret to succeeding is having grit, which is a combination of passion and perseverance, not talent.

With hints on how to develop your grit, this inspiring book will make you deconstruct the idea that talent is the key to success.

About the author Angela Duckworth

Angela Duckworth is a researcher and a psychology professor at the University of Pennsylvania. She is the founder and scientific director of the NGO Character Lab, which aims to promote the science and practice of character development.

Her first book, "Grit: The Power of Passion and Perseverance", remained for over 20 weeks on The New York Times bestseller list.

The book "Grit" is meant for all those who wish to achieve success and want to become a more persevering and motivated person.

Through the researches of Angela Duckworth, this book brings evidence that having grit and will to overcome defeats is fundamental to achieve personal goals.

Main ideas of the book "Grit"

Download the "Grit" Book Summary in PDF for free

Overview: What is grit? Why does it matter?

In the first part of the book "Grit", the author Angela Duckworth induces the reader to reflect on the meaning of the word "grit", through reports of her research in different groups. One of the examples is the US Army Special Forces.

The training required to be a part of this group involves a series of steps, and when observing it, she found out that 42% of the candidates abandoned the training. What then drives other people to continue?

Angela Duckworth reveals that grit is the factor that sets them apart from others.

Another example that the author presents to illustrate this issue of grit as an indicator of success is when she was a mathematics teacher.

She realized that talent was not enough to be successful, as the students who had math skills or higher IQ scored lower than the hardworking students.

Angela Duckworth realized that talent is valuable, but effort counts the double of it. Without effort, talent doesn't lead to success and that "talent x effort = skill" and "skill x effort = success".

As she defines in the book, grit is made of two components: passion and perseverance. Passion is what moves you and perseverance is you fighting and not giving up on long-term goals. These are key elements to succeed.

Finally, Angela defines 4 resources that lead the person to have grit: interest, practice, purpose, and hope. In the following Overview, we will define what each one means.

Overview: Growing grit from the inside out

Angela Duckworth says that liking what you do is paramount for you to have the will to succeed.

After several studies, she concluded that those who have performed better at work, do activities that interest them.

Also, what makes you interested in a particular thing is the combination of your genetic factor with the experiences you had in life, according to the book "Grit".

Practicing and overcoming obstacles you encounter in the middle of the path lead you to the sense of getting the grit.

As an example, the author Angela Duckworth reports that in one of her researches, she found that the most talented children participating in the National Spelling Competition were the ones who trained more. They also had the best performance.

Another preponderant factor is the purpose of you being in the fight for a certain end. In the book "Grit", Angela Duckworth defines this purpose as your intention to contribute to the well-being of others.

Lastly, Angela Duckworth defines as an example of hope:

That is, no matter how many times you fall, you should always get up with the certainty that you will make it happen.

According to the book "Grit", to have hope, you must have what the author calls "Growth Mindset", which means having an optimistic inner monologue (it can be developed with practice and guidance) and be perseverant in the face of any adversity.

Overview: Growing grit from the outside in

The author Angela Duckworth addresses in her book "Grit" the influence that people and the environment have on strengthening grit.

Parents and teachers have a huge influence on the child's life. If parents have grit, they will end up arousing that feeling in their children. Teachers should also always encourage this feeling in children, inspire them to dream big, and provide confidence and support in what they need.

For the author, one of the things parents can do to awaken the grit in their children is to encourage them to participate in extracurricular activities.

Research shows that people who participate earlier in this type of activity have better results in practically every imaginable metric. This is due to the fact that kids are exposed to challenges and motivated to perform activities that they enjoy.

Finally, Angela Duckworth says that another way to stimulate the grit is to be in environments where people have this personal skill since it ends up motivating others to develop it.

In the book "Mindset", by psychologist Carol S. Dweck, it is discussed how our beliefs shape our behavior and our growth. While mindsets produce definitive worldviews, people can change by learning new skills, which in this case is defined as "Growth Mindset", a subject also discussed in the book "Grit".

Charles Duhigg says, in his book "The Power of Habit", that understanding how habits work ensures you to have success. He uses Martin Luther King as one of his examples to explain how changing habits can impact your life.

Lastly, Caio Carneiro's book "Seja Foda!", "Be Legendary!" in free translation, aims to help the reader to develop a series of attitudes and behaviors to achieve successful results in any area of life.

You must awaken your grit, reinforcing the 4 resources that Angela Duckworth defines in her book as essential for this: interest, practice, purpose, and hope. Some other tips:

Did you like this summary of the book "Grit"?

We hope you enjoyed this summary and that you can apply the advice of the author, Angela Duckworth, to your life. Leave your opinion in the comments, your feedback is very important to us!

Also, to learn more about it, you can purchase the book by clicking on the image below: 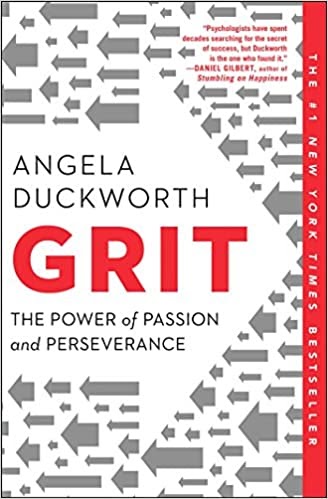