Discover the history of the greatest Brazilian tennis player and be inspired by this incredible trajectory of determination and perseverance!

Tennis is still a not so spread sport in Brazil, as soccer is. But when it comes to it everybody knows who Gustavo Kuerten is and how famous in the world he got.

Behind all of it, there is a story of the guy responsible for putting Brazil on the tennis map, reaching the top of the world ranking and even today being considered the greatest Brazilian tennis player.

In this summary we'll tell you the fascinating history of how Guga did it and what was his background.

Are you ready? Take a look!

About the book "Guga, um Brasileiro"

The book "Guga, a Brazilian" (Guga, um Brasileiro) was published in 2014. This work intends to show the trajectory of this athlete from his childhood until world prizes.

Gustavo reveals all of his feelings and some remarkable passages, mentioning his family, the obstacles faced, as well as his conquests. All of this with an enormous wealth of details.

About the author Gustavo Kuerten

Gustavo Kuerten, known as Guga, was born in Florianópolis in 1976. He is a former professional tennis player, having countless titles, among them the three-time champion of Roland Garros.

Since it is an autobiography, all the details about the author will be presented during the analysis.

"Guga, a Brazilian" is ideal for you who like inspiring biographies, especially for those who enjoy overcoming stories in sport.

Besides that, the content is also indicated for you who search for an example of values, endurance, integrity, and determination.

In this summary, we gathered the highlights of his childhood, adolescence and his professional career. So, let's take a look?

The whole history told by Guga is very compelling and exciting. He begins the narrative talking about his parents, telling how they met, their married life, their plans, their education, and careers. Aldo and Alice were athletes and have always been involved in sports.

They both had always dreamed of having children. They realized the dream and had three sons: Gui; Rafa, the brain of the house; and Guga, the promising athlete. Gui had serious limitations in getting around and communicating because of microcephaly and cerebral palsy. He lived until he was 28.

In addition, Gui always presented complications and needed constant special care, so Guga learned how to manage well his thoughts and the emotional side during the games.

Each point made in the course of all matches was dedicated to Gui, the guardian of his cups.

Guga tells us that when he was six years old, it was when it all began. Tennis had no tradition, and Florianopolis had no place to train.

Besides that, nothing was reported about the sport on television, so Guga wasn't aware of almost anything about it.

His older brother, Rafael was always a strong influence. Everything he did, Guga wanted to do as well, one of them being tennis.

His brother Rafael had great skills and even went so far as to become a coach, but he quit, to devote himself to college and later to be the manager of his brother's career.

Tennis was something that reunited his family.

At the age of 6, he got in LIC'S school of tennis (Lagoa Iate Clube).

Guga's childhood was marked by being very active. Rafa and he practiced various sports, attended the club constantly and even playing ping-pong championships.

Guga believes that the biggest loss of all tournaments came at the age of eight when his father passed away. At the moment, he and Rafa were in a tournament, and as soon as they got home, his mother reported the news.

With his death, Guga's mother decided to close the father's locksmith company and the only source of support was her employment and some equipment sold from the locksmith.

According to Guga, she performed an incredible magic to take care of her children, even with the huge emotional hole opened in their lives.

Even with the death of his father, he remained up there being the guardian angel of the whole family, especially in the face of two remarkable situations: a car accident with his mother and his brothers, and then a trawler in the sea, while surfing.

Until the age of 12, Guga wanted to be a tennis player, a soccer player and a surfer, all at the same time. At that moment, most of his time was dedicated to the Astel Club, devoting himself to the sports.

But he had to make a decision, become a soccer or a tennis player. Guga said that the more he scored in tennis, the less he missed football.

Tennis has always been seen as a sport played by people with better living conditions and was not so widespread in Brazil.

Thereby, his family didn't have money for him to take part in the tournaments, so an outlet was to prospect supporters.

Larri Passos was one of the most coveted technicians in the region. A year before his father's death, he threw a barbecue to attract Larri to train Guga. At the moment, he did not accept but promised Aldo that in the future he would train his son, which happened three years later.

Thus, with Larri's help, things started to change a lot. Larri was a strict, demanding person, and whenever he spoke, it was to motivate.

Larri became his official trainer, outlining a strategy to make the boy go further. All was accomplished through a lot of sacrifices.

His career developed like a stair, going up one step at a time and turning him into one of the best tennis players in the region and his state.

Given this, he needed new challenges, and then made a trip to Europe to face the best players there.

At the age of 19, the juvenile door was closing, leaving only the professional one. This made tennis stop being just a dream and becoming a survival.

Still, in that period, he achieved one of his greatest accomplishments: he was called to be part of the Brazilian national team.

An interesting quote in the book is the definition of champion according to Guga. He always considered the champion not as the best of all, but the one who handles the difficulties and wins the game at the end.

Guga reports that his whole childhood and adolescence history generated great stimulus making him capable of obtaining sensational turns during the games.

In all of his games and in every new challenge he acted with a lot of positivity and confidence against everything. He activated the "Gui mode" and always said to himself "one step at a time", "focus on your best", "I will not make a mistake".

The first year Guga worked as a professional was in 1995, starting his career in 187º in the world ranking. He managed to reach the individual and double challenger finals but ended up losing both. That same year, he joined the Davis Cup training team.

In 1996, things started progressing when he debuted with a victory at the Davis Cup, won his first tournament title challenges, played in the main Roland Garros title and won his first ATP (Association of Professional Players, responsible for organizing the tournaments).

According to Guga in his book "Guga, a Brazilian", there will be no more fabulously weird year than 1997, the year that he turned the key in his life.

The results became fantastic and he even got sponsorship without having to chase it, like Diadora and Banco do Brasil.

During this time he defeated 3 former champions in tournaments and won the famous Roland Garros. Besides, he won several ATP's and managed to occupy the 14º position in the world ranking.

All of the success was progressing, and he achieved unprecedented victories, such as the Masters Series title, beating the world's number 1 tennis player and winning the ATP's titles.

2000 was marked as the record's year, it was the time he had more wins in his career, a total of 63, and became the number one in the world. He reached the championships of Roland Garros and Masters Cup two times, disputed his first Olympiad and took Brazil to the Davis Cup's semifinal.

In the following year, Guga won more titles and the three-time Roland Garros championship, finishing the year as the world's number 2.

With all of Guga's achievements, Brazilians became more interested in tennis, making it more popular, expanded by TV broadcasts and newspapers.

Guga came from years of training and championships, always demanding his maximum without having time to rest the body.

So, in 2002, hip problems began to appear, that's why he got away for a few months and had his first surgery. But as soon as he returned, it was time to win his first title in Brazil, the Brasil Open tennis tournament.

Finally, Guga won his last title in 2004, at the Brazil Open. On that same year, he won a match against the world's number 1, Roger Federer, and took part in his second Olympiad. At the end of the year, he underwent an arthroscopy on the hip.

The years between 2005 and 2007 were marked by low participation in the games and few victories, all this was due to the problems faced in the hip. At the end of 2007, Guga occupied the 6, 800º in the ranking.

Thus, in 2008, at the age of 31, Guga decided to retire. He did a farewell tour of the World Circuit and won the creation of a prize with his name.

Gustavo Kuerten kept with his career in the sport, but in another way. Now he receives invitations to join commissions, being valued for all his successful participation in the sport.

Eric Ries, in the book "The Lean Startup", complements and expands the idea of the Principle 3 - first revolver bullets, then cannonballs. This is perfectly applied by Guga during the beginning of his confrontations, facing first the local and national opponents, that is, with less technique, and later facing the worldwide level considered the best in the world.

Jacob Petry's book, "The Law of Success in 16 Lessons", shows us that it is important to have a clear, specific, and attainable purpose for your journey, focusing all your energies and thoughts to contribute to your success.

Lastly, in "Awaken the Giant Within", Tony Robbins explains that maintaining the commitment to your decisions can be challenging, but the more you try, the easier it gets. Guga shows this to us perfectly.

Did you like this summary of the book "Guga, um Brasileiro"?

Did you enjoyed this summary? Don't not forget to leave your feedback, your opinion is very important to us!!

In addition, the full edition of this incredible history is available for purchase if you just click in the image below: 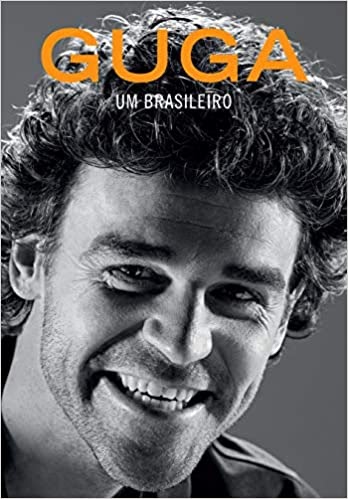