How the Mighty Fall - Jim Collins

Find out the five steps for the decline of large companies and discover if there is a recovery from these cases.

Every great institution has experienced difficulties at some point in its history. Any business can fail, no matter how well-established and successful it is.

In that sense, the big questions are: "how do you know if your business is about to decline?" And "how can you reverse this situation?". In 4 years of research, author Jim Collins discovered that large companies go through 5 stages of decline.

In this summary, we explain each of these stages succinctly and point to indicators so that you can identify whether your company is taking risks.

The book "How the Mighty Fall"

In the book "How the Mighty Fall", 2010, the author explores how even the largest companies can collapse suddenly, especially when they make the wrong decisions, giving advises through the book to ways to avoid such mistakes.

Who is Jim Collins?

The author Jim Collins is a business expert and author of several bestsellers, including:

In addition, he has contributed to the business magazines Harvard Business Review, Fortune and Businessweek and he has advised business leaders in the social and corporate sectors.

Why should I read the book "How the Mighty Fall"?

This book is suitable for students seeking to specialize in business, for investors who do not know which companies to invest in. It's also recommended for CEOs of startups who want to grow their business in the long run.

What are the key points?

In this summary we are going to explain the 5 stages of a company's decline: overconfidence built from success, undisciplined pursuit for more, denial of risks and dangers, desperate struggle for salvation, and surrender to irrelevance or death. Are you ready?

Pride comes before destruction. The first stage begins when people become complacent about success and see this as a right reserved for their company. With that, they forget what was initially responsible for their success.

Overconfidence is present in many forms during a company's bankruptcy. And one of the most dangerous faces of this feeling is what the author calls "arrogant contempt", which can occur from the following steps:

It is important to note that not all indicators are evident in all cases of decline, or the presence of an indicator does not necessarily mean that your company is at risk.

The characteristics of each stage can be used for self-diagnosis. In this way, the indicators of stage 1 are:

Stage 2 - The undisciplined pursuit for more

At this stage, the book "How the Mighty Fall" shows that companies make nonsense incursions into areas that are not very interesting to the company. It also happens that people in power want to grow very fast, which makes unsustainable the guarantee of excellence.

This thought led the author Jim Collins to create the so-called "Packard Law" (in honor of David Packard, co-founder of HP). He argued that an excellent company is more likely to die of indigestion by grabbing too many opportunities than starving to find fewer opportunities.

In this way, the following indicators can be visualized:

Unsustainable search for growth: success creates pressure for more growth, paving the way for a vicious cycle of expectations. This can force people to a breaking point. Unable to generate consistent tactical excellence, the institution goes wearing thin.

Discontinuous and undisciplined jumps: performing maneuvers that fail to respond to at least one of three tests:

Another obvious problem, said by Jim Collins, is that people in power begin to blame external factors for the difficulties, rather than taking responsibility for them. The fact-based dialogue is virtually extinct.

In this sense, the following characteristics indicate a fall:

Stage 4 - The Desperate Struggle for Salvation

In stage 4, leaders try to resort to quick salvation or retake the discipline that has produced the company's success in the past. The initial results of desperate actions may seem positive but there is lack of durability.

"How the Mighty Fall" advises that these life-saving measures include a new charismatic visionary leader, a daring strategy that has not been proven, a radical transformation, a drastic cultural revolution, a new product, a takeover game, or other "genius" solutions.

Stage 5 - Surrender to irrelevance or death

At this stage, cumulative defeats and costly stumbling wear people's financial strength and morale to the point where leaders lose all hope of building a good future.

Jim Collins says, in some cases, leaders simply sell stocks; in others, the institution atrophies until it becomes insignificant; and, in more extreme cases, the enterprise dies.

Is there a way out?

All companies face ups and downs, and many show signs of the early stages, even stages 3 or 4. But that does not mean that every organization experiencing stage 1 reaches stage 5, for example.

There are cases of companies that have fallen deeply into stage 4 and have been able to recover. Disney, IBM and Nordstrom are examples of cases that near-destruction was used as a way to catapult even greater growth than the successes achieved.

So while your company does not reach the depths of Stage 5, there is still hope. For this, you can not give up. Be willing to change tactics, but never forget your fundamental purpose.

It may be necessary to cancel new business ideas that have failed, and even turn off large operations that took a lot of time and effort. But never give up on the initial idea of building a big company.

Success comes when you fall and rise, again and again, without end. If you prevail or fail, endure or die, it depends more on what you do to yourself than what the world does to you.

In the book "The Wisdom of Failure", by Laurence G. Weinzimmer and Jim McConoughey, it is explained the concept of the destructive path of disengagement. In it the authors reaffirm the importance of leadership and the approach of employees as a way to keep the company growing.

In the book "The Hard Thing about Hard Things" the author Ben Horowitz makes clear the importance of managing crises and, when necessary, dismissing employees in the right way.

Tamara Myles, in the book "The Secret to Peak Productivity", develops the "Maximum Productivity Pyramid" system, whose model teaches you to organize from the space you work in until you know how to decide what is most important and how to get closer to your life goals.

How to avoid a failure?

Did you like this summary of the book "How the Mighty Fall"?

In addition, if you want to delve deeper, you can get the full book by clicking below: 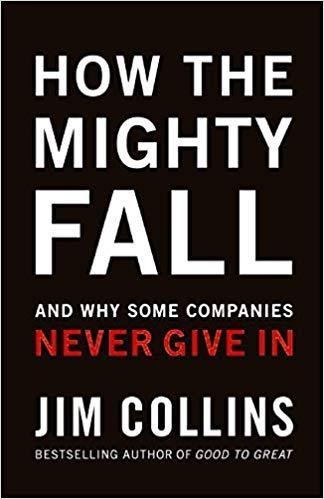