How to Thrive in the Digital Age - Tom Chatfield

Do you spend more time in the real world or in the virtual world? Have you ever felt the need to choose only one of them? Learn now how to deal with them in a balanced way.

Tom Chatfield in his book "How to Thrive in the Digital Age" invite the reader to think about some situations and how the world is changing.

The technology is in front of us and there is no way to ignore it. So how do you deal with it? Is your behavior influenced by patterns that are unnatural to you as a human being?

For example, are you among those who believe in the myth of being multitasking?

How about a little break to think about it?

Reflect on what this virtual world is all about and how we humans can not only survive but thrive within it.

About the book "How to Thrive in the Digital Age"

The book "How to Thrive in the Digital Age" was published in 2012 by the author Tom Chatfield.

Tom uses his experience as a consultant in technology and new media to elaborate on how the current wave of technological innovations has shaped people's daily lives.

In addition to the introduction, conclusion, and various appendices, the book's 155 pages accommodate 8 chapters, which deal with the topic from different angles.

An interesting point of the book is its various appendices, in which the author points out a number of authors and works that inspired him in each chapter.

About the author Tom Chatfield

Tom Chatfield, born in the UK in 1980, is a writer, commentator, speaker, and consultant on technology and new media. He has also worked for several companies, including Google and Mind Candy.

As a speaker, he excelled at forums such as TED Global and the World IT Congress.

Chatfield is the author of books on critical thinking and digital culture, as well as writing fiction. He also acts as a BBC biweekly columnist and plays piano.

The book "How to Thrive in the Digital Age" is indicated for every person who wants to understand how technology is shaping our behavior on a daily basis.

At the same time, the book encourages the reader to reflect on its relationship with reality in this new scenario.

Do you have no time to read now? Then download the free PDF and read wherever and whenever you want:.

Overview: The evolution of digital technology

Making a brief history of the evolution of technology, Tom Chatfield cites the first computers, created in the 1940s. This was undoubtedly innovative, but its use was restricted to the military area.

Mainframes, large computers created in the 1950s, were not unlike the first machines. Its use was still focused on a few researchers, still in the military area and also in the academic area.

The landscape begins to change in the 1970s, with the arrival of microprocessors and personal computers, not without first generating some skepticism. There was a belief that a very restricted audience would be interested in purchasing personal computers.

What happened from there is well known. The personal computer has been incorporated into the everyday life of modern life and digital age. But more recently we are seeing a new change: the personal computer is being replaced by the "intimate computer" in the form of tablets and smartphones.

Here, the author cites a specific category of new technologies: "intellectual technologies". It includes tools created to enable the expansion of the world's learning and perception capacity. Writing is a typical example of this type of technology.

However, the computer seems to be part of an even more specific category of the virtual world. Its ability to absorb and integrate other technologies breaks the limitations of a physical nature.

In the digital age, knowledge is produced on a scale far greater than one's own ability to assimilate it.

Overview: Our relationship with technology

Our relationship with technology is essentially marked by the experience it gives us. In this sense, the virtual world works as an amplifier of our own nature.

Social networks, for example, are new public spaces created for people to connect and coexist. While on one hand there are much hatred, rumors and lies circulating, on the other hand new relationships of trust have emerged.

As a result, we go through a reversal of priorities in the use of our time. Before, we lived day to day and spent time with connecting to some form of media. Today we are permanently connected, with brief intervals.

It is necessary to recognize the existence of these two instances, the connected life, and the disconnected life, not ignoring one or the other and extracting the best from each one.

While connected, life is very attractive and offers countless new possibilities, it will sometimes lead to a feeling of exhaustion of privacy. In addition, disconnected life continues to provide times when all our attention is needed.

Living in today's technological reality poses challenges that ultimately entail preserving our own condition as human beings. Some of these challenges are outlined below.

Computers are multitasking, we are not

One myth that is very much present in the rampant use of technology is that we have a multitasking capability, like a computer's processors. In other words, the idea is spreading that we are capable of performing several tasks at the same time.

For trivial activities, multitasking behavior is proven to work, but it is sufficient for an activity to require a continuous level of concentration for this belief to fall apart. In these cases, multitasking even has the opposite effect, reducing efficiency.

What we believe to be a multitasking capability is, in fact, the application of continuous partial attention to simultaneous tasks. In many contexts, this is a convenient and fruitful behavior, but it also puts us in a position of detachment and isolation that needs to be contained.

Computers have achieved an impressive capacity to store information. In this respect, human memory falls far short and it is inevitable to use machines to download all the information we are unable to storage.

In addition, computer memory preserves information accurately, without distortion and without loss over time.

On the other hand, Tom Chatfield says that no technology can hold memories the way we humans do, contextualized from unique points of view.

Computer memory has sequences of fact records, while human memory carries the history of existence.

Overview: The crisis of authority

The arrival of Google on the virtual world years ago consolidated a new way of understanding information. The content becomes relevant no longer through the endorsement of a subject matter expert, but because of its popularity with the public.

If once an expert selected which content would be published, now all imaginable content is published and public reaction defines which one is relevant.

In addition to casting uncertainties about the role of the expert, this new model seems to challenge the very idea of cultural production, as excellence gives way to the "medium".

This approach also gives rise to other issues, such as the possibility that this "mass" that defines what is relevant will be manipulated. This could even produce the imposition of lies and rumors about the truth.

On the other hand, there are initiatives that focus on the ability to produce cultural excellence from the "mass".

According to Tom Chatfield in his book "How to Thrive in the Digital Age", the experts are still there, and there have never been as many as now. The difference is that they need to compete for their space with "amateurs" in the production of information.

Overview: Entertainment in the digital age

It is said that on the internet every user is a click closer to pornography. What was once surrounded by barriers for restricted access is now easily available to anyone.

More than that, the distinction between enactment and reality, or between consumption and participation, is becoming less and less clear.

However, contrary to a widespread alarmist prediction in the early years of the commercial Internet, pornography did not go beyond its usual boundaries.

On the other hand, the game universe seems to have found very efficient ways to offer personal satisfaction from simulators that put the user in a parallel virtual world life. The risk lies in turning our backs on reality.

Political and ideological movements born in digital media are increasingly active and influential.

The mechanism that leads to the emergence of these movements is quite simple: people cluster around a cause and soon organize themselves (or are organized) for concrete actions.

Two characteristics common to these movements are their low hierarchical rigidity and the character of the cause, which is often marked by a desire to destroy rather than to build something.

The emergence of these movements also reveals the discredit of traditional structures of political representation. Digital media seem to have become tools for the direct action of movements.

Finally, this is a ground that still needs well-defined legislation and regulation.

In the book "Sapiens: A Brief History of Humankind", author Yuval Noah Harari says that humans reflect on the scientific advances of the human species and that today we are already a union of man and machine. He adds that we are moving towards a new species: the superhumans.

In "The Big Nine: How the Tech Titans & Their Thinking Machines Could Warp Humanity", author Amy Webb reports that Artificial Intelligence has been very integrated into our daily lives and that this can lead us to two futures: the dark, if use technology to steal data and wage war; or the bright, if we use A. I. to connect globally.

At last, speaking from an organizational aspect, in "Reinventing Organizations", Frederic Laloux says that companies shape themselves according to the evolution of human consciousness. Before, they were more authoritarian; Today, with the wide accessibility of information and globalization, the tendency is for organizations to become increasingly horizontal, disregarding the traditional hierarchical system of power.

Well, answer the following questions and you can identify if the concerns raised by the author are present in your daily life:

While there is a criticism of the presence of technology in our lives, it is undeniable that it has many benefits. Knowing how to use them is essential to thriving today.

Understand that the real world still has a lot to offer you, even though the virtual world seems "enough".

Be aware that this is not the most natural and efficient posture a person can take.

Humanizing digital memory makes stronger its condition as a human being amidst all the impersonality of the technological world.

Did you like this summary of the book "How to Thrive in the Digital Age"?

Despite talking about the world around us, what is essential about rediscovering who we are?

Be sure to leave your feedback here in the comments, so we can always offer the best content for you!

Enjoy and purchase the full edition of "How to Thrive in the Digital Age," in the link below: 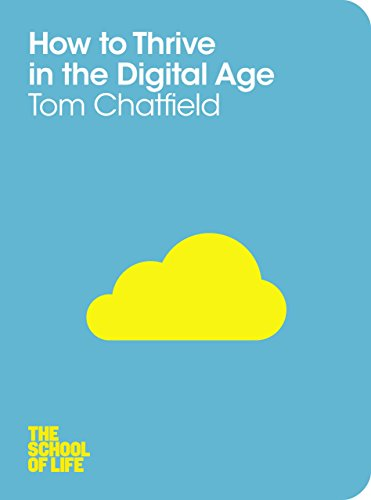