Marshall and Sally work by helping people identify their profiles in the workplace and make changes where they fail. This is how they found some common harmful habits among people.

Another point has been made from your knowledge and research: they are often different between men and women! Many factors may be the cause of this: our socializing as well behaved, good students, hardworking, an image of weakness/delicacy, among others.

12 habits that will be presented are always from what you can stop doing. This is not to say that all women behave the same way! However, there are some patterns. If you are interested in improvement, this is a good chance to learn.

The book "How Women Rise"

"How Women Rise" by Sally Helgesen and Marshall Goldsmith was published in 2018. It is divided into 3 parts, containing 20 chapters. They address the reasons that generate the 12 habits, how they act in their daily lives and several examples that help us understand these habits.

So if you feel that your job performance is not the way you would like, continue with us in this summary! Learn how to be active in this process of change, transforming what is within your reach.

Who are Sally Helgesen and Marshall Goldsmith?

Sally Helgesen is a coach specializing in female leadership, cited by Forbes as the world's largest in the field. She also lectures, workshops, programs in companies and has authored several books, including the bestselling book "The Female Advantage: Women's Ways of Leadership".

Marshall Goldsmith is a world-renowned coach who specializes in helping successful people, CEOs, improve their habits and results. In addition to giving lectures and training to large organizations and entrepreneurs, he also writes books such as "What Got You Here? Don't Get You There".

Women who experience the work environment of companies, especially those looking for more voice, greater and better positions, can take advantage of the content of the book.

What are the key points of the book "How Women Rise"?

Download the "How Women Rise" Book Summary in PDF for free

Where are we coming from?

Marshall Goldsmith has already helped CEOs of major companies such as Alan Mulally of Ford Motor Company achieve success. Already Sally, after the release of "The Female Advantage", became an expert in guiding women on this journey.

In this way, the authors realized that men and women act differently in positions of command. Men tend to deviate from criticism; while women, despite all the compliments, always have a very strict self-criticism, among other habits.

Through the meeting of the authors and the exchange of information, they realized that they could help women in a successful climb from mistakes that have been repeated over the years, holding them back.

In this chapter, Sally Helgesen and Marshall Goldsmith say that it is critical to find out what is successful to you in your context. Being in a position that has a higher salary? More voice in the organization of the company you work for? Only then you can move to reach your goals!

In addition, they highlight the role that external situations play in the difficulties and inequalities women face in the workplace. They will rightly indicate internal changes in habits that women may have to help achieve their goals.

How do you define success?

Some factors can make you resist the change you need and are proposing. It is critical to recognize and work on them. In fact, this is a point much discussed during the book.

Among the factors, there are beliefs that are most commonly demonstrated by women, such as:

There is also constant stereotyping of cultures. But instead of wasting energy on negative feelings, consider whether it was constructive criticism.

Habits that keep women from reaching their goals

In his previous book, Marshall Goldsmith listed 20 negative habits. However, they soon realized that only a few of them applied to the women's journey as well. They are:

In addition, organizations themselves make it difficult for people to develop more differently.

Habit 1 - Reluctance to Recognize Your Achievements

Interviews show that women say they have difficulty stipulating credit for what they do. Some say they are afraid of looking like "the most annoying guy in the company".

Promoting your work is an important part of all jobs. And the key to taking it to the next level!

If you identify with this behavior, you can start training by accepting compliments. Instead of answering unworthily, pointing out a failure, just thank and stop there!

Habit 2 - Expecting others to spontaneously realize your contributions

This habit and the habit mentioned above go together. Thinking that others will notice your work because it speaks for itself is not common within corporations! And you shouldn't feel weird about trying to show it!

Companies not only market good products. They also have a good marketing team.

Habit 4 - Building rather than leveraging relationships

Research often points out that women are good at building relationships. So why would this habit become a problem?

Sally and Marshall noted that while women are always willing to listen and help, they bother to receive it from others. They don't want people to think that they are only there for favors.

Habit 5 - Failing to Conquer Allies From Day One

When joining a new company or position, try to build relationships from day one. Feeling insecure about this is harmful, a junction of habits 3 and 4.

Habit 6 - Putting Your Job Above Your Career

Serena was a production assistant for 11 years. He had always been very dedicated and his producer recognized his talent but was standing in this position. Then she reevaluated her actions and realized that she needed to change her tactics.

Serena asked him for help, explained his will, and in just a few months was in New York producing documentaries.

"The desire to be loyal can lead you to neglect your future, sacrifice your ambitions, and sell your talent and potency by minimizing them," according to "How Women Rise."

Therefore it is always necessary to be aware of the whole.

Habit 7 - The Trap of Perfection

Trying to reach perfection may have helped you at some point, but perfection can be turning into a "rock in your path" if you are aspiring for larger positions. Why?

It refers to the effort to be a wonderful person at all times. To always be helpful and pleasant so that others feel good around you.

This habit can affect your ability to make decisions, to exercise authority, to impartial your judgments, to leave you vulnerable to the manipulation of others and other things.

Pleasing usually only works to some extent. When managing people it is necessary to set boundaries, expectations, and delegate tasks.

You are in a crowded room and more people are coming. You worry about reducing the space you are taking up, assigning free spaces, so that everyone can accommodate.

However, this type of body expression diminishes as others see your ability to project power and authority! In addition to sending messages to your brain that you should not be occupying that space, physically or metaphorically.

Language is also another field to work on. Be straightforward, say what you are really thinking. And don't be apologizing all the time as a way of expression!

The duality between the impression that one is too intense and the lack of demonstration of any feeling are both problematic. It may seem that you do not fit the profile of the company or even that you are repressing its naturalness.

The problem is not the emotions. They help us to identify the circumstance, they are the raw material of our energy and passion. The mistake is to express ourselves at their peak, when we may be blind to some details.

Respond after thinking in a confident, measured, and authentic way. Explain your feelings/intuition in logical and common sense terms. Why don't you trust something? Why should another path be taken? Synthesize your ideas.

Habit 11 - Ruminating (Clinging to the Past)

People clinging to the past often spend a lot of time mourning over what went wrong, rather than moving on.

Habit 12 - Letting Your Radar Distract You

Research shows that women often process information more optically than men. However, most of the time, companies just want to "get to the X" of the issue.

It is important to train yourself to care less about what happens around you and focus on what you are accomplishing. If sometimes your imagination about what others are thinking hinders you, remember that people have their personal problems! Review the story that tells you.

Overview: Start with a dot

Don't do it alone

Relying on someone to help you move can make it easier. Sometimes you're acting on autopilot and don't even realize your actions! A coach is a great professional to help you accomplish this. However, they do not always fit in your pocket.

A friend in the workplace, your own boss, or someone you trust is good people to ask for help. First, you must think about which problem to solve. Then ask the person to observe you on a daily basis and give you feedback on what they find.

Overview: Leave the judgments aside and remember what brought you here!

Change is difficult, but it is possible. Marshall and Sally make it clear that criticizing yourself, judging yourself too much can get in the way of the process. We are not on the edge, nothing is 8 or 80. Embrace change as you put judgment aside.

These habits are based on beliefs that may have been positive in your life at some point. However, believe in your potential to get out of the comfort zone. Remember the goal, see more and more women in positions of leadership and power!

In "Women Who Are Leaders and Entrepreneurs" Silvina Ana Ramal provides several examples of how women sabotage their own achievements. From not accepting compliments to attributing all your great deeds to luck. A woman with self-love and high self-esteem is generally not well regarded by society.

In "The 5 Second Rule" author Mel Robbins says that failure, from one point of view, is the path to success, and focusing on that, we put insecurity aside. This is very positive since the overwhelming majority of our decisions are based on feelings, not logic.

Okay, but how can I rise?

Did you like this summary of the book "How Women Rise"?

What change will you start applying in your life from today? Do not forget to leave your opinion on the topic in the comments and give your rating for this summary!

And if you want to know all the examples and why the full version of the book is available for purchase by clicking on the image below. Get it now: 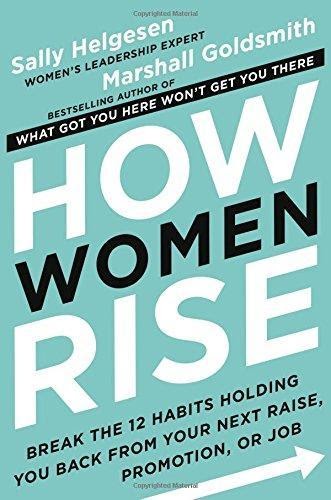