I am Malala - Malala Yousafzai

Check out the incredible story of the girl who got shot in name of the girls' right to education!

Have you ever complained about studying or having too much obligations in a course, college or something like that?

Have you ever complained about a position you hold without noticing that there has been too much struggle (specially if you are a woman) for you to hold that position?

That's right, you probably had a lot of challenges to reach the current stage. As well as you, had Malala, a girl who suffered an attack against her own life because she defended the right of girls to frequent schools and to have the freedom to exercise a function in society.

Are you curious? Then let's have a better look at this fascinating story!

About the book "I am Malala"

This autobiography is the story of the girl's childhood and her family, showing the differences in life before, during and after the Taliban.

About the author Malala Yousafzai

The Pakistani Malala was born in July 1997 and was the youngest person to receive the Nobel Peace Prize, at the age of 16.

Malala was the victim of an attempted murder in 2012, when the Taliban tried to silence her discourse that all girls had a right to education and knowledge along with their place in society.

After the attack, Malala was taken to England, where she managed to recover, publish this book and continue her fight.

As it is a biographical work, all the details about the author will be presented during the analysis.

The book "I am Malala" is suitable for professionals of education and for all people who wish to understand and learn from the history, life and struggles of Malala, specially, her fight for education and women's rights.

Besides, the book is also a good request for people who want to understand about the Pakistani culture and people.

Main ideas of the book "I am Malala"

Let's check out the history of a muslim girl who got shot for education!

Download the "I Am Malala" Book Summary in PDF for free

Overview: Before the Taliban

Malala exposes details of her life before the Taliban invaded Swat, the city where she grew up and lived.

In this first part of the book "I am Malala", the author describes her childhood experiences, talking about her great relationship with her parents, and raising some questions about the culture and religion in which she lived.

She mentions an episode that she experienced and has marked her life, when she found children in a landfilled and asked her father, who worked in a school, to give each child a place and opportunity to study.

Malala argued that those children could not afford for education, but were as worthy as any other child to receive it.

Through this small example we can see the beginning of Malala's struggle and her non-conformity with social inequality.

Overview: The Valley of Death

The second part of the book is considered devastating. Malala reports the arrival of the Taliban in Swat Valley.

The author says that, from the very beginning, the leaders of the terrorist organization began to set new rules, and spread their teachings through a radio station, the Mullah FM.

In addition, after the arrival of the group, terrorism began to be practiced against the population. Malala says that the terrorists prohibited women from going to school and markets, for example. They also declared that men were forbidden to cut their beards and that if this was not obeyed, they would be punished.

She still says that one of the terrorist leaders, Fazlullah, began to propagate the prohibition of the use of TVs and CDs and, as a result, began to burn.

According to the book "I am Malala", the situation was beyond the control of the authorities and, when they realized it, the Taliban members were exposing the bodies of all those who did not obey the extremist group in the squares.

After so many deaths, terror gave a "truce". Malala and her family, who had left the village of Swat, returned to continue their work.

When she arrived in the village again, she said she found the school built by her father with various Taliban marks.

At that time, Malala says that her friends began to be given for marriage, so she started to question the fact that such young friends (around 13 years old) were forced to leave school to take care of their husbands.

Even with her questioning and uncommon profile, Malala continued her studies and kept fighting against the prohibition of education for women in her country, thus contravening the rules of the Taliban.

Because of it, the Taliban tried to stop Malala from continuing her fight. This way, one day returning from school, she was shot in the head by the terrorist group.

Overview: Between Life and Death

Most of the facts exposing her clinical situation come from the details given by her parents, since she spent a lot of time unconscious.

Because of the attack, the world became aware of the existence of Malala and the terror that the Taliban had established in Pakistan.

With all the repercussions of the story, the army transferred her to England to receive a proper treatment. The girl had to go alone to another country, because her parents feared leaving their children in Pakistan, since the whole family was still at risk.

In the final chapters of the book "I am Malala" she tells the story of her difficult recovery, her emotional reunion with her family in England, and her change of life after the repercussion of her history.

As a result, Malala achieved worldwide recognition for her exciting experience.

In 2014, because of her engaging in fighting for women's right to education she received the Nobel Prize of Piece.

Today, she is a symbol of the women's struggle for gender equality and gives lectures all over the world.

In the book "Lean In: Women, Work, and the Will to Lead", Sheryl Sandberg presents some challenges she faced to conquer prominent positions at work, in addition to raising the discussion of the gender issue based on academic research and personal observations. Thus, she proposed reflections to encourage women to fight for their dreams.

The book "Brave, not Perfect", from Reshma Saujani, addresses the problem of how girls learn since an early age to be perfectionists and afraid of failure, rather than being courageous, and assesses the consequences of this later in life.

Finally, in "Becoming", from Michelle Obama, we get to know the history of a woman that faced the challenges at the same time that was place in that spot people considered to be not hers. In this book she show that pursue is the key to success.

Malala's story certainly opens new doors for us to fight for women's rights.

As a man or a woman, we must always remember the importance of women in society and fight for them to have the same rights as a men.

Keep in mind that what is correct always wins. Also, know that no matter how difficult it is to fight and defend the idea of an egalitarian education for all, and also to defend against any form of extremism, in the end, you will always have support, recognition and will carry out some beneficial transformation, no matter how slight it may be.

Did you like this summary of the book "I am Malala"?

What did you think of this summary? Leave a feedback so that we can always improve our content!

If you want to know all the details of this story, just click on the image below to purchase the book: 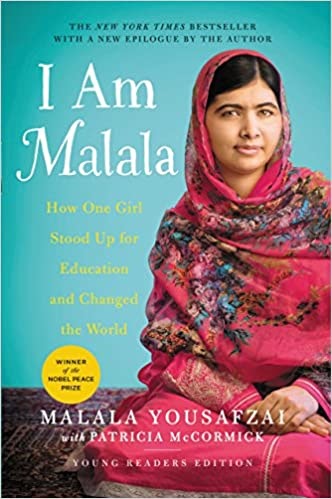