Learn the principles and values that guided the brilliant track record of the greatest basketball player of all time. Improve your life by applying Michael Jordan’s winning mindset now!

You don't have to be a basketball fanatic to know about Michael Jordan. In the book "I Can't Accept Not Trying" he shares the lessons he learned throughout his career in sports.

To achieve all this glory, it took a lot of effort and dedication on the part of the athlete. After all, Michael Jordan is known as a huge star in the sport and is considered the greatest basketball player of all time. And a title like that is not easy!

Got interested to learn more about Michael Jordan's lessons? Stay with us in this summary!

About the book "I Can't Accept Not Trying"

"I Can't Accept Not Trying" was written by the former basketball player Michael Jordan and published in 1994.

The author shares the lessons he learned from his experience as an athlete during his life, in addition to his vision of excellence, teamwork, dedication, among others.

About the author Michael Jordan

He led his team, the Chicago Bulls, to win six NBA titles in the 1990s and won two Olympic gold medals.

The content of the book is right for you who like big biographies that are responsible for influencing millions of people, especially for those who like overcoming stories in sports.

In addition, content is for you looking for models of values, endurance, integrity, and determination, contemplating practical examples of all struggles and victories. If you want some motivation to transform your life, continue this reading with us!

Main ideas of the book "I Can't Accept Not Trying"

The key points of the book are:

The structure of the book is divided into chapters with these same themes, in which the authors reports how each of these principles and values was important in his sporting career.

"One step at a time. I can't imagine any other way to accomplish anything."

Michael Jordan has always been clear that his main goal was to become the best basketball player in the world. But he knew that to achieve this he would have to reach his goals step by step.

So, he always tried to set short-term goals:

"Looking back, I could see how each of those steps or achievements led me to the next step."

When was cut off from the first team in high school, Jordan had an important lesson. He never wanted to feel so bad again.

He then established that winning a place on the first team was his goal. That was his biggest focus all summer long. As he trained and refined his game, his thoughts were on that.

"Fear is an illusion."

The fear of doing wrong or being embarrassed, for the author, is not enough to stop doing something. You need to be aggressive to get what you want.

If, in the end, your best result is not enough, then at least you will look back and know that you were not afraid to try. Failure makes us try more enthusiastically next time.

In the sports environment, fear comes from a lack of focus or concentration.

"If at the moment of a free throw in front of the basket I imagined the millions of people watching my TV play, I would never have been able to do anything. So, mentally, I tried to put myself in a familiar environment."

"There are no shortcuts."

Michael Jordan reports that he always believed that if he worked hard, he would get the results he wanted.

By graduating from high school and choosing a college other than North Carolina, where many Dean Smith-trained players were eventually recruited by NBA teams, the former athlete would have strayed out of his way and shown that he was not committed with his goals.

By undertaking half a task, one could only expect half the result. So Jordan engaged in training with the same intensity as in games.

In sport, the point guard, a very intelligent guy who can carry the team on his back, cannot succeed without the participation of the players who protect him. In companies, the same situation occurs: it is no use for an executive to have great ideas if he has no people who can make it happen.

Managers, as well as coaches, have to figure out how to put individual talents at the service of the company.

"The instant you move away from the fundamentals, everything can go downhill."

The fundamentals are pillars that make everything else work. If your goal is to be the best, you should not abandon it.

Some people have great skills but do not know how to apply them in specific situations. Michael Jordan cites, for example, an athlete who has an extraordinary thrust but, if not in a position to take a bury, will not be able to shoot well enough to score.

People are always looking for instant results, so they skip a few steps. This may make you succeed in the early stages, but sooner or later your limitations will appear.

"Without the backing of performance and hard work, words mean nothing."

Michael Jordan reports that he always sought to lead by example. He believes that actions have greater power than speech.

No one becomes the leader just by being the best player, the smartest or the most popular. Respect is earned through attitudes.

The former athlete reports that he often tried to play with minor bruises to establish a reference principle. If he was considered the best player or was making more money, he wanted everyone to know that he deserved it.

In "The Law of Success in Sixteen Lessons", Jacob Petry teaches us that it is important to have a clear, specific and attainable purpose for your path, focusing all your energies and thoughts on contributing to your success. All this purpose is observed in the career of Michael Jordan.

In "Awaken the Giant Within", Tony Robbins explains that maintaining a commitment to your decisions can be challenging, but the harder you try, the easier it gets. Michael Jordan shows us that perfectly. So when you fail to evoke a change in your life, don't be discouraged. Instead, think about what you can learn from failure.

Finally, for John C. Maxwell, author of "Leadership Gold", the best leaders are those who can hear. In addition, good listeners have the ability to understand what is going on and better see other people's strengths and weaknesses.

Michael Jordan teaches us how each of the aforementioned principles was important for professional success.

As the author himself mentions in the book, this method could be applied to anything someone chooses to do, because his teachings go beyond the sporting realm.

Here are some lessons taught by the Michael Jordan:

Did you like this summary of the book "I Can't Accept Not Trying"?

Do not forget to leave your feedback and, if you have any questions, just leave in the comments! By this way we can always offer the best content!

Also, the full edition of this amazing work is available for purchase by clicking in the image below: 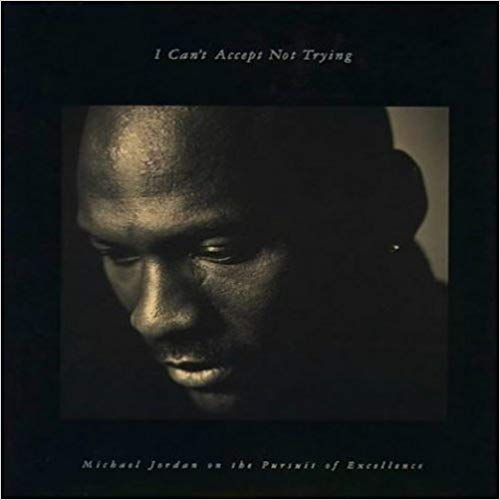