Learn how the new generation of small entrepreneurs is innovating the market and facing big companies competitively.

Today we live in a world where everything is quickly outdated. Not only are products and services devoured by others, but entire companies disappear through innovative ways of working.

Conservative fields of the economy, which have been working the same way for years, now face more efficient solutions invented by whom? By garage entrepreneurs who are determined to overcome the inflexibility of certain industries.

At the heart of all this, there is Silicon Valley, the place from which most of the innovations that transform the world arise. New start-up companies reject formalities, attack the source of social inefficiencies, and impact everyone's life.

Those who cannot keep up with trends and consumption patterns will be left behind. Those who do not understand the future and which direction it is heading will be outdated.

"Incansáveis" (2019), "Inexhaustible" in free translation, written by Maurício Benvenutti, challenges you to think outside the box and face conservative management theories that have become insufficient today.

The book has 192 pages and 15 chapters that are divided into two parts: "What Will Happen to the World" and "How the Inexhaustibles Create Opportunities."

About the author Maurício Benvenutti

Mauricio Benvenutti quit his job as an executive at an important IBM partner to undertake with a small group of partners at an unknown brokerage firm.

This small venture became XP Investimentos, the largest broker in Brazil and is among the largest financial institutions in Latin America. Mauricio became a Brazilian reference in Silicon Valley, diving headfirst into the world of the most innovative companies in the world.

He is currently a partner of StartSe, Brazil's largest platform for connecting investors, entrepreneurs, and coaches.

"The way we do business has changed. It's fast like never before. In this book. Mauricio describes how a new group of entrepreneurs has been infusing an entire generation with brilliant ideas and hard work" - Marcelo Maisonnave, founder of XP Investimentos.

"Inexhaustible is a must-read. A true lesson in understanding the future and preparing for it" - Pedro Englert, venture capitalist and partner at StartSe.

Main ideas of the book "Incansáveis"

To anticipate what lies ahead, here are the central proposals of the work, in the form of summarized sentences:

Now is the time to understand what each one means and how to adapt to this new business model. Shall we?

Overview: "The world will be very different in a short time"

Forbes magazine publishes annually a ranking of the top five hundred companies in the world according to their revenue, The Global Fortune 500. The annual ranking changes are incredible and increasingly intense.

In the year 2000, 52% of listed companies went bankrupt, were sold or are no longer on the list. Looking at 1955, 88% of organizations no longer exist or have already left the agenda.

In other words, it is critical that companies can adapt to rapid technological changes.

However, some are hampered by the weight of corporatism that hinders a more responsive response. On the other hand, there are still those that remain static and do nothing, falling behind.

"This is why any small entrepreneur can overtake a large corporation today. These are non-traditional and unconventional companies that are attracting the new class of consumers. They have dictated recent world transformations and tend to continue writing the future".

Airbnb currently dominates the worldwide hosting network. Uber has transformed the way people move around. Google is the global leader in advertising. And Apple, in addition to changing the smartphone market, has also changed several others.

It is undeniable, "it is not the companies that dictate a market, it is the consumers". Whenever an idea is accepted by the market, there is no return. But in the beginning, big innovations actually look like not-so-good ideas. For example:

Electric cars, according to Maurício Benvenutti:

"are a reality in many parts of the world. In Silicon Valley, it is common to see them being recharged in front of houses. Gas stations and the entire industry that supports combustion vehicles will be replaced in the coming decades".

Electric vehicle producer Tesla has been worth about 60% of Ford and GM's market value, which has been in the market for over 100 years for 10 years.

Google's Loon Project aims to provide internet access to people in remote areas of the world. It is based on using balloons that float with onboard technology.

All these innovations were ridiculed when they were launched. Of course, the full adoption of this news will not happen overnight, but the benefits from them will be immense.

"The key to avoiding limited and lagging thinking about technological advances is to see potential and opportunity where most see only pessimism and distrust".

If you want to create any business venture in life it is crucial not to complicate. This is a basic precept in Silicon Valley. Don't make it difficult, do the simple. Uncomplicated to talk, uncomplicated to draw and to show. That is what convinces. The easy captivates, fascinates and provokes us all.

HP (Hewlett-Packard) was founded in Silicon Valley in 1939 in a garage. It was one of the first technology startups in the region. What happened in that garage influenced many Vale businesses.

This event gave rise to the so-called HP Garage Rules, an authentic guide to easily and boldly managing any type of business. They are:

Overview: "Your idea is worth very little"

An idea has value only when it impacts people's lives. A good idea in your head, well, it's just a thought. And that has no value at all. So, don't think the image in your head is your asset.

There are many people on the planet, the possibility of someone else having the same vision as yours is great. To start a business, you need to select an idea. Get it out of your mind, validate it and execute it.

If you have a lot of ideas, there are four steps that Maurício Benvenutti learned in Silicon Valley:

Don't be afraid to put yourself to the test. To dare is amazing. Testing your limits is wonderful. Failures will only tell you the right way. So move on.

Flavio Augusto's work "Inflection Point" says that many people do not realize when they are facing a life-changing moment. So they end up choosing convenience, not conscience, just following the flow. It's important to point out that not following what most people do doesn't mean we are left behind. It means that the other way would lead us to the path of success.

There is also "Innovative Entrepreneurship", in which Nei Grando reveals that there are many ways to undertake. The internet, smartphones, and the development of computing power have turned into reality many previously unviable ideas. At the center of this evolution there are technology startups.

Another work that addresses the subject is "Entrepreneurship". José Dornelas says that it is inherent to entrepreneurs to dream big and envision a dazzling future for the company with achievements and great success. However, dreaming big is not enough to leverage the business. The entrepreneur needs to turn him into concrete attitudes.

You may have noticed that your job or business is unsafe, as well as that of several other people. The change will happen to everyone and that is why entrepreneurship is the way out for many people.

So you should keep in mind that:

Did you like this summary of the book "Incansáveis"?

Tell us your thoughts about the summary and the book "Inexhaustible"! Your feedback is important to always offer the best to you! 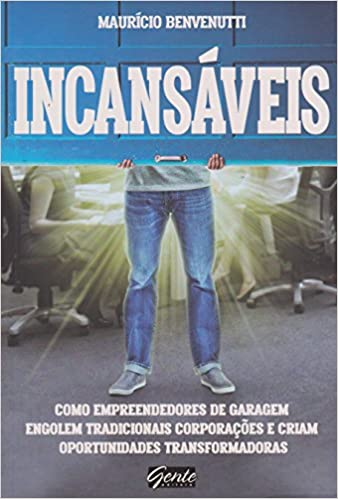