Learn powerful leadership lessons from Steve Jobs and know more about him and Apple, known as one of the biggest companies in the world.

"Inside Steve's Brain" is a book about an innovative entrepreneur whose ideas are present in the daily lives of many people - Steve Jobs. He conquered millions of fans worldwide and revolutionized computers, cinema, and digital music.

Written by Leander Kahney, this biography will show you the secrets of Apple's success and share some valuable lessons by the face that represents the company.

Come see what is behind the famous products of Apple, like the iPhone, MacBook, iPad, among others, known by its exclusive design and unique user experience!

About the book "Inside Steve's Brain"

The book "Inside Steve's Brain" was published by Portfolio on April 17, 2008. The writer Leander Kahney promises to portray the main biographical information of Steve and his vision of product, leadership, experience, and innovation.

The book is divided into 8 chapters, each titled as a trait of Steve and followed by a list of "Steve Lessons" with the main insights he adopted.

Finally, the book brings many details of Steve's relationship with Apple, from when he brought out of bankruptcy, his secrets to success, and all the marketing and design strategy used.

About the author Leander Kahney

Leander Kahney was born in 1965 and he is editor and reporter for Wired. Currently, he is known as the main contributor to the Cult of Mac blog.

Both for new entrepreneurs, who want to know how to create a successful business, and for those who just want to know more about Steve Jobs and Apple.

The book "Inside Steve's Brain" also presents an ideal content for those who wish to reflect on the principles of life in the professional and personal fields.

It will help you believe in yourself when all around you say it is impossible.

Main ideas of the book "Inside Steve's Brain"

The highlights of Leander Kahney's book are:

In this summary, we selected the main characteristics of Steve Jobs' personality and the main attitudes that led him to success. Also, at the end of each trait, there are 3 important lessons to you.

So let's get down to business!

Download the "Inside Steve's Brain" Book Summary in PDF for free

Steve Jobs left Apple in 1985 and returned 11 years later, in 1996, as an advisor to resurrect an almost bankrupt company. And it didn't take long for him to implement big changes and become the CEO.

Apple was "mess". Wide range of different products, none of them was a leader. Also, the company had large numbers of employees, and they were poorly distributed in their functions.

As the author Leander Kahney shows, Steve Jobs started working by surveying the products, listening to the opinions of employees, and understanding what was being done inside the company. The solution found was to make the company focus, as well as each employee individually.

Thus, he reorganized the entire company: he canceled several projects, dismissed several employees, and reduced the product line to just 4, compared to 40 sold. All this aiming at simplicity.

As a result, some successes were achieved at the time, such as the iMac being considered the best-selling computer of all time, as shown in the book "Inside Steve's Brain".

Steve's 3 key lessons on focus are:

According to the book "Inside Steve's Brain", Steve drove his employees crazy for the incessant pursuit of excellence, everything was demanded in the smallest details. After all, this is one of the main legacies of both him and Apple.

Everything was carefully thought out to the smallest detail. Both the design of the product and its packaging had the same importance. Also, a single design was presented and discussed several times.

About perfectionism, Steve Jobs teaches us to:

All the success achieved by Steve was only possible thanks to his team. He always made great partnerships and attracted good people to his business, like the designer Jonathan Ive.

Leander Kahney says that Steve always made a point of having a "lean" team, recruiting the best, and encouraging employees to do what they want.

After building a good team, Steve was the advisor and responsible for passing on his ideas so that the team could execute them, taking the products towards success and perfection.

The main lessons about teamwork presented in the book "Inside Steve's Brain" are:

"I want to put a ding in the universe."

All his actions were aligned with his mission, regardless of how it was taken and his personality, all attitudes conspired towards his goal.

That's what fueled Steve Jobs' passion and made him passionate about his work. According to the book "Inside Steve's Brain", he was a dominant man who liked to control everything

Generally speaking, he was able to show this passion and vision to his employees, making them contribute with all their potential to revolutionize the world and build something great with the creation of the products.

Steve's top 3 lessons on passion are:

Apple has already lost millions by making innovations without considering important points. An example of this is the product called Cube.

As the author Leander Kahney shares, a valuable lesson learned in order to succeed in innovation is to analyze in detail the users' experience. And at Apple the user was Steve Jobs, he thought like a layman, demanding that the product was built in the simplest way possible, ensuring that everyone knew how to take advantage of its features.

Thanks to that, Apple is currently one of the most innovative companies in the technology sector, bringing constant innovations such as the iMac, iPhone, among others.

With the current market, several companies are anxious to spark the process of innovation. Steve's tip is not to think about innovation itself, but about excellence and making great products.

Other lessons about it in the book "Inside Steve's Brain" are:

Steve was a person who thoroughly controlled all processes in a perfectionist way, from the software used to the food served to his employees.

He stayed in control of everything to create the best user experience. As it is affirmed in the book "Inside Steve's Brain", one of the measures taken was to refuse external partners and deep modifications in Apple's creations.

Steve's lessons about controlling brought by the author Leander Kahney are:

In the book "15 Secrets Successful People Know About Time Management", the author Kevin Kruse quotes Warren Buffett to show the importance of saying no: "really successful people say no to almost everything". Every commitment of time can result in the loss of other opportunities. So, it's important to protect your most valuable asset, time, from any request that does not meet your priorities.

Peter F. Drucker clarifies, in the book "The Effective Executive", that executives can be brilliant, imaginative, and well-informed, yet still be inefficient. Effective executives are systematic. They work hard in the right areas, help the company achieve its goals, and their results define them.

In the book "The Leadership Pipeline", the authors Ram Charan, Stephen Drotter, and James Noel emphasize that functional leaders need to manage certain areas that are outside their specialty. Therefore, they need to not only try to understand this different work but also learn to value it.

Besides the lessons of Steve Jobs already presented by Leander Kahney, other important suggestions are:

Did you like this summary of the book "Inside Steve's Brain"?

Are you ready to apply the "Steve Lessons"? Give us your feedback, your opinion is very important!

Also, to know all the details about this unshakable entrepreneur, you can buy the complete book by clicking on the image below: 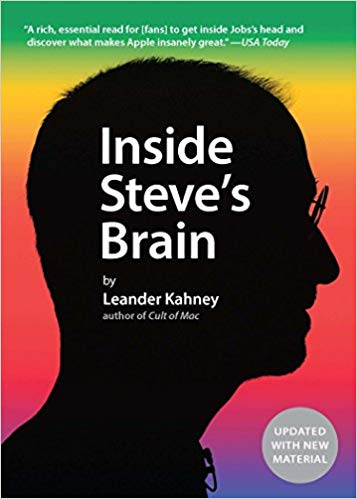