Discover the method used by great leaders, throughout history, to act correctly in difficult situations and overcome the crises faced.

These two questions are asked by the author early in the book. What do you think? Is it even possible to be born with the skills of a leader?

Our goal in this summary is to discuss this from the history of great leaders who have faced great challenges.

We'll embark on this journey through the past decades and centuries and understand the lessons taught by these big leaders!

About the book "Leadership in Turbulent Times"

Published in late 2018, the book presents an analysis of leadership from the story of four large former US presidents.

During its 12 chapters, of which 3 are dedicated to each president, the book shows the origins of them, what are the characteristics of a leader, the practices used by them and their main results, from in-depth case studies on crises faced by these rulers.

About the author Doris Kearns Goodwin

Engaged in her research on American presidents and leadership for approximately 50 years, Doris has practical experience working for the White House alongside great leaders.

It was her work that earned her awards such as Pulitzer, Lincoln Prize and Carnegie Medal and made her a writer recognized for her work.

In short, when we talk about politics and leadership, Doris Kearns Goodwin is the authority on the subject.

As the author herself says, this book "Leadership in Turbulent Times" offers an essential and accessible path not only for successful leaders and future leaders, but for all people to apply that knowledge every day in their lives.

So if you are or want to be a leader, you have come to the right place!

Main ideas of the book "Leadership in Turbulent Times"

Download the "Leadership: In Turbulent Times" Book Summary in PDF for free

On March 4, 1861, assumed the 16th President of the United States: Abraham Lincoln.

He is the President who faced challenges like the Civil War and carried out feats like the Emancipation Proclamation, which abolished slavery and gave initial steps so that could become illegal in the following years.

Lincoln had a simple origin and had to leave his studies to work in the farm with his father. But in his eagerness to learn, he became self-taught and had to study on his own.

Thus, Abraham Lincoln became a lawyer, a Federal Deputy, took part in the founding of the Republican Party and was elected President.

In his early days as a politician, his tactic was simply to observe and understand how the dynamics of the assembly worked. So he knew how to act and achieve greater victories.

However, he had his term finished early when he was assassinated in 1865 while watching a theater play.

As Doris Goodwin defines, great leaders are shaped by crises and challenges. And Lincoln went through adversities from his poor childhood to episodes of deep depression.

But the major challenges faced during his rule were the War of Secession and the approval of the Emancipation Proclamation.

During the civil war, he needed to unite a divided country, because the South wanted the separation of the North. And allied to this, the issue of slavery was an emerging problem.

That is why, it was up to Lincoln to lead the nation toward peace and unification and articulate in government how to secure the freedom of slaves by abolishing slavery. And such a transformation has brought learning as we shall see now.

The book "Leadership in Turbulent Times" says that in order to enable the signing of this treaty, the President faced a long road of obstacles to get his ideas approved and to declare slaves free through the Proclamation, in 1865.

So, to understand what allowed Lincoln to know that it was the right time to implement such a transformation and that it would work, Doris Goodwin addresses the following topics:

Born in New York in 1858, Theodore Roosevelt lived in an opposite reality to Lincoln. Son of a rich family, descendant of Dutch, Theodore studied at Harvard and had all the support of his family during his trajectory.

As a politician, he participated in the New York Assembly and was Director of the city's Police Department and also governor of the state, until in 1900 he was elected as Vice President alongside William McKinley.

However, the assassination of McKinley, in 1901, made Roosevelt assume the presidency and initiated his period of eight years as 26th President of the United States.

Known for his progressive thinking, Theodore Roosevelt achieved several goals, including a Nobel Peace Prize for having brokered a conflict between Russia and Japan.

The Challenges Faced and the Great Crisis

Theodore Roosevelt's first major challenge was a family tragedy when his wife got a serious illness, and his mother, who took care of her, was also infected. So Theodore had to deal with the loss of both of them, who died the same day.

Years later, Roosevelt assumed the presidency amidst a whirlwind caused by the aforementioned death of the previous president.

The great crisis faced by Theodore, which the author Doris Goodwin uncovers in a study case, was the Coal Strike, where the association of miners went on strike in search of better wages and working conditions.

The biggest problem was that winter was approaching, and coal was the main material needed to heat the houses, which required a great ability of the President as crisis manager to solve this problem.

All leaders go through some sort of crisis and as we have already said, all the Presidents addressed in this book "Leadership in Turbulent Times" have been shaped by the major crises.

However, Theodore Roosevelt's learning of management difficulties stand out in this matter, especially at the time of the coal strike. From his behavior we can learn that:

Overview: Franklin D. Roosevelt, the Great Depression and the Leadership of Recovery

Despite the name, Franklin and Theodore were distant relatives, fifth-degree cousins, but both left valuable leadership lessons for us.

Being a member of a wealthy family, he had a privileged education, graduating from Harvard and Columbia University. When he was 25, he outlined a 4-step plan so he could become President of the United States.

This way, at just 31 years old, he had already completed the first two steps planned. He was Senator in New York and later Secretary of the Navy. Franklin still tried the election as Vice President, but was defeated.

In 1928, he reached the third step: to be governor of New York. This achievement allowed him to reach the top of his planning in 1932, becoming the 32nd President of the United States.

Roosevelt served four mandates for 12 years and was the President who longer held office.

During his lifetime, Franklin Roosevelt experienced many adversities, such as diagnosing poliomyelitis and being in the government during World War II, but he is considered one of the best presidents in US history.

In 1945, before the end of World War II and three months before completing his 4th term, Franklin Roosevelt died as a result of his deteriorated health, but left an immense legacy.

The Challenges Faced and the Great Crisis

At 39, Franklin Roosevelt contracted polio, limiting his movements and confining him to a wheelchair. This was a major blow to him, who needed years to recover and keep the political career.

As President of the United States, Franklin Roosevelt faced two crucial moments in the country's history: the Great Depression and World War II.

When he was elected and assumed his post, Roosevelt had to deal with the desperation that was set in the country. It was already the 4th year of the Great Depression and it was necessary to define the plans of action to get out of this "hole" in which the United States was and to resuscitate the country's economy.

Soon after the Great Depression came World War II, where the United States joined in 1942 after the Japanese attack on Pearl Harbor. During this period, Roosevelt had to face all the consequences of a world-scale conflict.

With a government that has faced two major crises, Roosevelt needed to develop a leadership style based on the country's recovery, and from the study of tactics, we can highlight the following ones:

Popularly known as LBJ, Lyndon B. Johnson was the 36th President of the United States, taking office after John Kennedy's death.

Born in 1908, with a simple family, LBJ graduated from Texas State University and Georgetown University, working independently while at school, where he developed several characteristics such as his ability to persuade.

Lyndon Johnson was a professor and entered politics in 1937 as a member of the House of Representatives. Later, he was chosen senator and in 1961 assumed the vice-presidency of the Kennedy's Government.

With Kennedy's death in 1963, LBJ assumed the presidency, a position that he occupied until 1969, leaving like greater accomplishment the approval of the Law of the Civil Rights.

After the end of his term, Johnson retired to his ranch and dedicated himself to write his memoirs and, with his health weakened, passed away in 1973, victim of a heart attack.

Challenges and the Great Crisis

Like Theodore Roosevelt, Lyndon Johnson also assumed the presidency in a troubled setting, where his predecessor had been assassinated.

The book "Leadership in Turbulent Times" tells that he got aware that he needed to go ahead with the government so that the country would not stop.

This way, one of Lyndon's big challenges was to pass the Civil Rights Act, which had been stagnating in Congress for a long time.

This law was very important because it defined the end of discrimination, be it by race, color, sex or national origin, in the United States and faced resistance from some people, while having the support of people like Martin Luther King.

Thus, with the signing of the law, Johnson achieved one of the most important milestones in the US rights struggle, where blacks were no longer forced to sit at the bottom of the bus and could vote for the first time.

Lyndon Johnson's visionary leadership has been applied since his inception, seeking to overcome the tragic absence of a leader in the country until the signing of the Civil Rights Act.

From his characteristics as a leader, we can mention some factors that stand out:

In his book "Simple Thinking", Gustavo Caetano highlights that to be a great leader, one of the key points is resilience, which should work together with the power of adaptation and flexibility.

Patrick Lencioni, in his book "The 5 Dysfunctions of a Team", brings you step by step how to make your team more effective. And seeing the main challenges, we can draw several parallels with the team management made by the 4 presidents.

In the book "The 48 Laws of Power", Robert Greene says you should know who you are dealing with, as each person has a different reaction. And this is very noticeable in the actions of Lincoln, Johnson and Roosevelt.

Did you like this summary of the book "Leadership in Turbulent Times"?

Did you enjoyed this text? Remember to leave your feedback so we can understand how to always offer the best content for you!

In addition, since you are interested in the book, you can get it clicking on the link below: 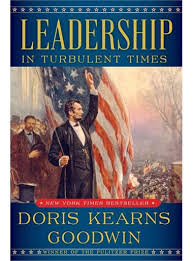