Read a brief history of Leonardo da Vinci, one of the most extraordinary figures of all time, who connected art with science and humanities with technology.

If being creative is hard enough, imagine being the genius of creativity? In Walter Isaacson's biography of Leonardo da Vinci, the fame of the superman is shattered to show what it is like to be a genius in practice and in reality.

On the other hand, to say that individuals like da Vinci can be counted on the fingers, is no longer news. No wonder that, to this day, his memories remain very vivid.

This brilliant Italian taught us to have plural interests in order to acquire vast knowledge. As if this were not enough, he also presented the need to have the courage and courage to think differently during his life.

Ah! Now is the time to take a unique dive and enjoy exploring the universe full of facets of one of the greatest prodigies in history!

In addition to all this, find out in this summary how the Tuscan achieved genius despite his procrastination. But still, do you think this is impossible? Then be sure to read to the end and prove it!

The biography of Leonardo da Vinci

In the biography "Leonardo da Vinci", Walter Isaacson was able to draw on the thousands of pages written by the genius. Isaacson gathered the most recent discoveries about his trajectory and his works.

The content of the required 640 pages delivers a timeline divided into 4 spheres: science, life, world, and art. The author has written about the whole range of Leonardo's knowledge with a certain fluency and eminence.

Still, it must be said, Da Vinci was extraordinary and continues to be recognized worldwide. Among his works, the most famous and prominent are "Mona Lisa" and "The Last Supper".

In addition, the work presents from the main characters and periods of Leonardo da Vinci's life to annotated illustrations of his innovative studies on anatomy, armaments, botany, fossils, geology, hydraulics, and flying machines.

Who is Walter Isaacson?

Walter Isaacson is considered one of the most prominent contemporary biographers. He is also an American author, journalist, and professor.

He was editor of Time magazine and chairman of the board, as well as CEO of the CNN television network. For his worldwide influence he made the Time 100 list.

As a biographer, he has written about some of the most influential and innovative minds in history. For example, the biographies of Steve Jobs and Albert Einstein are evidence of Isaacson's ability to write with excellence, even in very broad and complex contexts.

He attended Harvard and Oxford universities as a Rhodes Scholar at Pembroke College, at which he is an Honorary Fellow. He is a member of the Royal Society of Arts and the American Philosophical Society. Also, he has won many awards such as the Gerald Loeb in 2012 and the 2013 Benjamin Franklin Medal.

For those who seek to be inspired by creativity in the most varied fields of knowledge, the content of the biography "Leonardo da Vinci" fits like a glove. In addition, the work is recommended for those who want to get to know and be surprised by the human side of the genius.

The biography about the creator of the contact lens and the parachute is recommended for those who like the conception more than the execution.

Furthermore, the work of Walter Isaacson is recommended for those who want to know about his inventions that were never realized, unfinished paintings and unpublished treatises.

What can I learn from the biography "Leonardo da Vinci"?

Did you know that the fact that Leonardo da Vinci was born out of wedlock can be considered bliss? In the words of the time, he was considered a "bastard child".

This was not only considered bad, but also despicable. But Walter Isaacson explains that if this were not so, the Italian genius would probably have been a notary like every firstborn in his family for at least five generations. In short, he would then have had little time to devote to his genius. Fortunately, this did not happen!

Walter Isaacson pulls out Leonardo da Vinci's file right away! In his biography it is stated that he was born on April 15, 1452 at about 10 pm.

The birthplace was in the commune of Vinci, belonging to the Tuscany region of Italy. In his childhood, the Tuscan was divided between two houses.

Except for the primary "abacus school," the absence of a formal education because he was a bastard son did not prevent him from being self-taught or a "disciple of experience", as he once aptly put it.

For the biographer, his posture of free thinking opened ways for him to not be just another follower of traditional thought.

To create his method, Leonardo da Vinci relied on experimentation, curiosity, and the skill to marvel at phenomena usually ignored after childhood.

In technical language, da Vinci elaborated an empirical approach to understanding nature that anticipated by more than a century the method developed by Francis Bacon and Galileo Galilei.

Surprising, isn't it? Yes, he wrote that the intention was to consult experience first, and then to demonstrate why such a phenomenon occurs that way.

According to Walter Isaacson, until he was twelve years old, the life that the prodigy of humanity led in Vinci was very quiet, despite all the complexities of being part of a huge family.

However, in 1464 it was different: his stepmother and grandfather passed away just about the time Leonardo was reaching the age when he needed to learn the trade.

During almost his entire career he spent in Florence, Milan and Rome, i.e. major centers of creativity and commerce. At this time, still, he was usually surrounded by students, colleagues and patrons.

What is Leonardo da Vinci's sexuality and its impact?

Not everything in life is flowers, even for one of the greatest geniuses in history. Involved in controversy at the time, one week after his 24th birthday, in April 1476, Leonardo da Vinci was anonymously accused of practicing sodomy with a prostitute.

This happened around the same time that his father had a legitimate son who could become his heir. But, the charges were dropped due to the absence of a witness and the character of anonymity.

According to Walter Isaacson, Leonardo was attracted to men and, unlike Michelangelo, a contemporary artist and architect, seemed not to be bothered by this.

The Renaissance Da Vinci faced his sexuality with maturity. He made no effort to hide it or proclaim such a characteristic, but it probably contributed to his not feeling like a conventional person.

One of the Florentine's first companions was a young Florentine musician named Atlante Migliorotti, whom he taught to play the lyre. Leonardo drew him and described him as a portrait of Atlante raising his face and with the whole body of a naked boy, seen from his back playing a lyre.

His more serious and lasting companion who moved into his residence in 1490, on the other hand, had an angelic appearance and a devilish personality. This earned him the nickname Salai, the little devil.

Sodomy was considered a crime at the time and Leonardo would come to painful discovery and was sometimes penalized. Also, homosexual acts were considered sins by the Church, and a papal bull of 1484 compared sodomy to "carnal encounter with demons.

Leonardo da Vinci, as a good polymath, did not distinguish art from science or life from the world, he had the global view of things. He sought to understand how and why these things behave and then explain and portray them in different ways.

It is amazing, isn't it? With his achievements, the genius teaches the importance of connecting the humanities to science.

He loved both without making much distinction. For example, when he was painting the Mona Lisa's smile he helped configure the human lips to discover how nerves and muscles work.

His creativity and innovation, too, came from engineering and science as well as art in the humanities. This, indeed, made him the most creative genius in history.

Also, Leonardo da Vinci worked as a military engineer and painter for various authorities and artists of the time such as Verrocchio, César Borgia, Louis XII, and Francis I.

In 1503, he began painting Mona Lisa, which he worked on for the rest of his life. He was the most prominent artist for his use of the sfumato technique that generates smooth gradients between shades.

What did Leonardo da Vinci write in his notebooks?

For biographer Walter Isaacson, due to his descent from a long line of notaries, Leonardo da Vinci had an innate talent for keeping his records. Shortly after his arrival in Milan, he began such a practice, which he exercised with regularity.

He recorded interesting scenes in his notebooks, especially those involving people and emotions. He used to walk around with a little notebook hanging from his belt.

He observed constantly, making notes and analyzing circumstances and behaviors of the people around him.

From notebook to canvas painting

Leonardo da Vinci loved to write and paint. Walter Isaacson says that even his passing thought records and unrefined sketches served Leonardo's leaps of imagination. When he wanted to paint someone's image, he followed a few steps:

According to Walter Isaacson, both the little notebooks hanging from his belt and the larger sheets in Leonardo da Vinci's atelier became repositories for all his obsessions.

As an engineer, he honed his own technical skills by drawing mechanisms he saw or imagined;

As an artist, he would sketch his ideas and make sketches of paintings;

As a show producer, he made sketches for costumes, created devices to move stages and sets, and wrote fables for staging and witty texts for interpretation.

Other books about Creativity

Ed Catmull, author of the book "Creativity, Inc", tells his experiences as president and co-founder of Pixar, showing the secrets of creativity to achieve success.

Stephen Hawking wrote his autobiography "My Brief History" showing the importance of resilience in his life path and the achievement of genius in science and physics.

Finally, in "Everybody Matters" Bob Chapman and Raj Sisodia explore how true leaders must continually study to develop themselves and those around them.

Alright, but how can I be like Leonardo da Vinci?

Throughout Leonardo da Vinci's biography, several means are shown that help in the search for knowledge:

Ultimately, Leonardo da Vinci proves that these characteristics are essential to be a genius and have a brilliant mind, even without regular study!

After this dive into the amazing world of the creative genius, it is time for you to emerge! So, how about evaluating the abstract?

Your opinion is essential for us to improve it and create even more interesting summaries for you!

Don't forget to subscribe to our premium subscription to get access to the audio of this and other summaries in several languages!

Love the summary and want to read the whole book? Get it now by clicking on the image below. 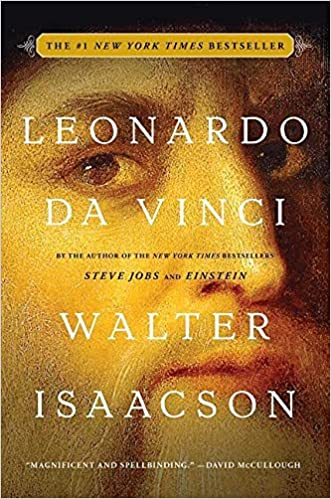