Discover in this summary how the astrophysicist overcame all obstacles and became the most famous scientist in the world!

Stephen Hawking was born in Oxford into a family of doctors. The academic universe was part of his and his brothers' lives since their childhood: his father traveled to Africa constantly, where he did medical research. Much of this time of his life was in laboratories.

Soon he began to feel the first signs of amyotrophic lateral sclerosis and along with the evolution of the disease, also grew the desire to unravel the secrets of the universe.

This beautiful journey brings secrets and teachings about willpower and conquest. Keep reading to know them!

About the book "My Brief History"

The book, from 2013, tells the history of the scientist and physicist Stephen Hawking until the year of 2011. There are thirteen chapters summarized in three parts in this summary that addresses the trajectory of this remarkable figure, who built a brilliant career, even with a degenerative and incurable disease.

Through the life lessons of this book, you will gain new breath to overcome your problems and not give up on the first obstacle.

About the author Stephen Hawking

Stephen Hawking was one of the most famous scientists in the world. He was a professor at Cambridge University in England and held the university's former Isaac Newton's chair.

With eight medals in honor of his work as a scientist and researcher, he has accumulated five awards in the field, including the most important in physics: "The Albert Einstein Award" for his work on black holes.

The work is suitable for everyone who needs encouragement in many areas of life, such as workers, leaders, managers, and students.

Also, it is a good book for people who like inspiring biographies and histories of overcome.

Main ideas of the book "My Brief History"

In this summary, we will address Stephen Hawking's history with lessons he left. Each chapter, you will learn a little physics in a simple way, but also, you will learn unforgettable teachings. Here we go?

Download the "My Brief History" Book Summary in PDF for free

Overview: The beginning of everything

Stephen Hawking was born on the day that Galileo Galilei, another important physicist, died.

In the book "My Brief History", he says he was always a curious child. The father, doctor, and researcher won awards and encouraged the whole family to enter the academic world.

Early on, little Stephen wanted to know how things worked and didn't agree with the school system. Moreover, he says that as a child he was thinking of knowing what the mechanism of the universe was like. This will was marked in his memory until he reached adulthood and started researching.

In adolescence, he had the first signs of the disease that marked him forever: Amyotrophic Lateral Sclerosis.

Knowing that he could die in a short time, he decided to live each day as if it was the last and begin his research journey that would change the history of physics forever.

The first step was the sacrifices. When he chose Oxford College, he was already known for his physics and mathematics skills, and while his family traveled on vacation, he studied and took tests.

As soon as he entered college, he met his future wife, Jane, who took care of him during the less aggressive first stage of his illness. In graduate school, he came across the beginning of the concept that would make him popular: Cosmology. He faced the challenge of researching something that was not popular, unprecedented.

Even with the disease progressing, Stephen never let it be an obstacle and teamed up with other researchers to begin studies on the black hole. With so many advances, he became a member of the Royal Society of England.

What was also growing were his limitations: after a tracheostomy, the scientist could no longer speak and lost all body movements, being trapped in an electric chair and a computer that transmitted his voice. Everyone thought it would be the end of the scientist, but they were wrong.

Under these conditions, he released seven books with the help of computers and wrote many articles. The blackhole research made Stephen one of the world's leading researchers up to date. Unfortunately, the real breakthrough came only after his death in 2019, but everything was built during his lifetime.

Stephen Hawking never won a Nobel Prize because, in life, he could not closely observe a black hole, work that was done after his death. Even so, all the effort and willpower made the world look at him as an entity.

The book "My Brief History" says that over 60, the scientist wanted more. He researched time travel theories and many others.

In the work, he stresses how well it was worthy not giving up. He points out that disability did not hinder the scientific work. This way, he could have a complete and enjoyable life, doing everything he wanted, even with limitations.

The work ends with photos of personalities and places that the scientist knew.

In "I Am Malala", the activist Malala tells her amazing and overcoming history. She suffered an attack on her life because she defended the right of girls to go to school and to have the freedom to play a role in society.

The book "Long Walk to Freedom" is an autobiography of Nelson Mandela. He reports his life, education and his time in prison. In addition to giving rich details of his inauguration as president of South Africa. Highlighting the political advance and the arduous struggle to rebuild the country's segregated society, earning it international recognition.

In the recommended "Everybody Matters", the authors explore how true leaders must continually study to develop and develop those around them so that they can also become excellent leaders who believe and value people.

It is not easy to set a goal and stick to it with so many obstacles that arise in life, especially with an illness. But after this summary of "My Brief History" and the teachings of Stephen Hawking, you are almost ready to face adversity with more pleasure and resilience.

Did you like this summary of the book "My Brief History"?

Did you like the summary? Leave your feedback in the comments, your opinion is very important to us!

Also, if you are interested in the book, you can buy it just clicking in the link below: 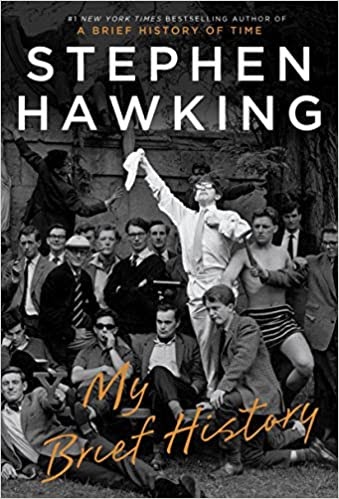