Want to apply strategies to unlock and sustain originality with others? Discover the secrets of creative minds and how to become an original person by stimulating the imagination.

Adam Grant uses in his book "Originals" a variety of real-world studies and stories (business, sports, politics, and entertainment) to prove that you can improve your creativity, your ability to defend ideas and to identify them as well. Like, what thoughts circulating creative minds.

From the perspective of the pioneers, you will see the challenge of making the world a better place. And also which thoughts surround creative minds. He explains which strategies and skills you must develop to create innovative solutions.

In addition, Adam shows what kind of behavior and mindset you should have to not be discouraged in this world with such pressure and resistance to the new.

Got interested to learn all those lessons and cases of success to be more motivated? Stay with us in this summary!

About the book "Originals"

"Originals", released in 2017, was written by Adam Grant and teaches successful techniques used by professionals who dared to ride the tide and push their projects forward.

About the author Adam Grant

Adam Grant, born in 1981, is recognized as one of the 10 most influential management thinkers in the world by Fortune magazine.

In addition, he has been Wharton's highest-rated professor for seven consecutive years, a University of Pennsylvania business school of business administration. Its courses are among the best in the world.

Adam Grant is the author of three bestselling books of The New York Times, which sold over one million copies and were translated into 35 languages. They are "Give and Receive", "Originals" and "Plan B" (in partnership with Sheryl Sandberg).

Main ideas of the book "Originals"

Download the "Originals" Book Summary in PDF for free

Overview: "The risky business of swimming against the current"

In 2008, four students (mired in debt) were outraged at the exorbitant prices for changing their glasses. One had not replaced them for more than five years, even after the ophthalmologist's recommendation had changed twice.

With this in mind, the students decided to revolutionize the eyewear market by making them more affordable, but it was necessary to overcome a company that owned over 80% of the US market.

Their idea was to open a website for selling glasses online. With each glass purchased, another would be donated to a resident of a developing country.

However, the boys received a lot of criticism: "Who would buy glasses over the internet? Because you have to try them first," if it was a good idea someone would already be selling "."

Despite hearing that the venture was crazy, the company was founded.

Warby Parker was it chosen name. The initial goal of the students was to sell a maximum of two glasses per day. However, they hit their annual target in less than a month and were called by GQ magazine "Netflix of the glasses".

In 2015, Warby Parker, with 500 employees, was ranked as the most innovative company in the world by Fast Company magazine. Giants Apple, Nike, and Google were the previous champions, with more than 50, 000 employees each.

After five years, the four friends managed to build one of the hottest brands in the world. Warby Parker was then valued at over $1 billion and had annual revenues of $100 million.

According to George B. Shaw:

"The sensible man adapts to the world, the foolish man insists on trying to adapt the world to himself. Therefore, all progress depends on the foolish."

Overview: "The art and science of recognizing original ideas"

When it comes to creativity, people tend to be overconfident and this can be a problem. Social scholars know this very well. Let's look at some of your findings:

In creating an idea, Adam Grant says that we are often too close to our own taste to judge it properly, as well as far from the taste of the target audience. We are flooded with a sense of victory and overcoming the obstacle.

As Brandon Tartikoff, former president of the NBC entertainment division used to say:

"No one comes here with an idea they think is bad."

According to the author Adam Grant:

"To some extent, entrepreneurs and inventors have to be overly confident in the chances of success of their ideas. Otherwise, they would not have the emotional fuel to carry them on."

But not only that, even after being aware of public taste, there is what psychologists call the confirming tendency: inventors end up focusing on the qualities of their ideas and disregarding defects.

So to maximize your chances of creating a successful idea, increase the number of ideas you create.

For example, according to the list of the 50 greatest works of classical music, chosen by the London Philharmonic Orchestra, Mozart has six compositions, Beethoven has five and Bach has three.

Mozart has created over 600 works throughout his life, Beethoven has composed over 650 and Bach over a thousand. In other words, the more productions, the greater the chances of success.

Parents and educators have always told us to start doing our tasks early rather than leaving it to later. In the world of self-help, there are numerous works aimed at eliminating procrastination, as well as a large niche.

In our personal and professional lives, we are constantly being told that the key to success is to act quickly. But does doing an activity in advance guarantee that it will be done as well as possible?

"Procrastination can be the enemy of productivity, but also an ally of creativity. In Ancient Egypt there were two different verbs for the idea of procrastination: one denoted laziness, the other meant waiting for the right moment."

Of course, there are advantages to getting things done quickly. But Adam's studies of the originals show us that there are more disadvantages to being first and acting fast.

A peculiar example of procrastinator is the famous Leonardo da Vinci. Da Vinci is considered one of the most original inventors in history, his creations involved painting, architecture, anatomy, engineering, sculpture, music, geology, botany, mathematics and cartography.

The Mona Lisa painting, according to researchers, was not painted at once: da Vinci spent about 15 years painting it.

Even with procrastination continually bothering him, Da Vinci knew that creativity could not be rushed. He understood that:

"Geniuses sometimes do more when they work less because they are thinking of inventions and forming the perfect idea in their minds."

Eric Ries in "The Lean Startup" explains that it is important that the word "innovation" be understood widely. These can be original scientific breakthroughs, a new use for existing technology, creation of a new business model, among others.

In "Creativity, Inc", Ed Catmull should always prioritize people over ideas because creative people create good ideas, but good ideas can be destroyed by bad teams.

In the recommended "Everybody Matters", the authors explore how true leaders must continually study to develop and develop those around them so that they can also become excellent leaders who believe and value people.

If you're looking to unleash the currents of originality, here are some practical tips shared by Adam Grant that will help you:

Did you like this summary of the book "Originals"?

Are you ready to become an original individual? Did you find it useful for your life? Leave your feedback in the comments!

If you want to dig deeper into the subject, the book's full edition is available for purchase by clicking on the image below: 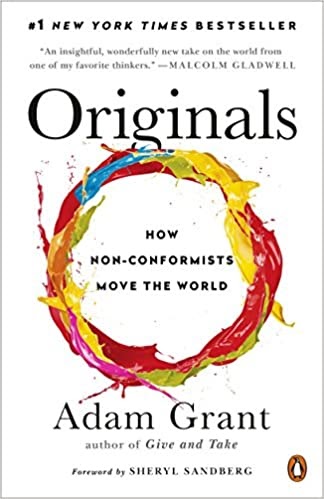