Imagine being able to interview the Devil. What could we learn from him? Discover, with Napoleon Hill, how to overcome this entity's cleverness and discover its real potential.

It all started with a manuscript hidden for over 70 years. What is its secret? Why was it hidden for so long?

In this book, Napoleon Hill presents the details of his exclusive "interview" with the Devil. Is it possible to learn anything from him?

Is there really a devil's secret code? And better: how to break the secret code of the Devil's mind?

But, don't be afraid! According to Napoleon Hill, the book has a noble purpose: "to help humans discover their true potential".

The book "Outwitting the Devil"

"Outwitting the Devil" was written by Napoleon Hill in 1938. In the baggage, one of the worst economic crises in the United States of America!

This is a masterpiece by the author who laid the foundation stone for all writers of motivational thinking and applied psychology.

Since it was published in the US, this book has been a source of inspiration and courage for millions of people around the world.

With 200 pages in the 2014 edition, published in Brazil by CDG Editora, the work is structured in twelve chapters and has a compact summary at the end, which recalls the fundamental points of the work and facilitates the reader's life.

Who was Napoleon Hill?

Napoleon Hill (1883-1970) was an entrepreneur and one of the greatest American authors in the field of personal fulfillment.

He has advised Woodrow Wilson and Franklin Delano Roosevelt, US presidents, and interviewed more than five hundred successful people, including Henry Ford and Thomas Edison, developing teachings that still influence leaders in their pursuit of success.

It is Napoleon Hill's concept of what Master Mind is and how to apply it, as well as a number of important works such as "Think and Grow Rich".

The author provides the right tools for those struggling to reach their personal goals, giving tips on attaining full achievement and success. In addition, this work is a must-read for anyone who likes books about personal development, applied psychology, and motivational thinking.

What are the key points of the book "Outwitting the Devil"?

Here are some ideas shared by Napoleon Hill that represent the central proposals of the work:

According to the author himself, there are three interconnected things within his "interview with the Devil": "The habit of drifting", "The Law of Hypnotic Rhythm" and "The Element of Time." And it is about these three aspects that we will deal with in this summary.

So, are you ready?

Download the "Outwitting the Devil" Book Summary in PDF for free

The Habit of Drifting

Napoleon Hill uses a question and answers technique with the Devil. He reveals: The most powerful weapon the Devil possesses over humans consists of two secret principles of mind control.

The first is the principle of habit, which acts in people's minds. Operating on this principle, the Devil establishes the habit of drifting.

This is because when a person begins to drift themselves on any subject, they go straight to the gates of (what we humans call) Hell.

The author further states, based on the interview, that all "people who think for themselves never drift, while those who do little or no thinking for themselves are drifters".

Thus Hill concludes that "a drifter is one who permits himself to be influenced and controlled by circumstances outside his mind".

Another characteristic of a typical drifter is letting "the Devil" occupy their mind and use their intellect instead of thinking for themselves.

"A drifter" - writes the author - "is one who accepts whatever life throws in his way without making a protest or putting up a fight. He doesn't know what he wants from life and spends all of his time getting just that."

Ahead, there are other points related to drifting:

The Law of Hypnotic Rhythm

Napoleon Hill asks the Devil what is the mysterious law by which he manipulates humans.

The Devil replies that it is not easy to describe the law in a simple way, but it may be called the "Hypnotic Rhythm." It is the same law by which people can be hypnotized.

The Law of Hypnotic Rhythm is nothing but the last stage of habit! Thus, any physical thought or movement (good or bad) that is repeated more than once, becoming a habit, automatically becomes rhythm: the Hypnotic Rhythm.

The following are some points that should be highlighted:

According to Napoleon Hill, no one is smart enough to escape the influence of the Hypnotic Rhythm.

This law fixes the dominant thoughts (positive or negative) of non-drifters or drifters. On the other hand, it ends up being favorable to non-drifter people as it helps them convert their objectives, plans, and goals into physical replicas.

For all this, it is worth noting that the Law of Hypnotic Rhythm is not good or bad, but only fixes your thinking habits and makes them permanent. Only a drifter would want to escape the influence of the Hypnotic Rhythm.

The next principle highlighted by author Napoleon Hill is "The Time," the fourth dimension.

According to the author, time is the very Law of Hypnotic Rhythm. "The length of time required to maintain thinking habits depends mainly on the object and nature of the thoughts".

Here, there are Napoleon Hill's main considerations about Time:

Books about self knowledge

"Start With Why: How Great Leaders Inspire Everyone To Take Action" is suitable for those who want to inspire others and succeed at work. In this journey, the author highlights the importance of knowing your "why", that is, your purpose and your ultimate mission.

In "Unlimited Power", Tony Robbins explains that generally, a successful person walks in a higher, more imposing way, showing self-esteem. One way to succeed, then, would be to replicate this behavior and begin to walk the same way, more imposingly.

Finally, in "Life-Changing Secrets from the 3 Masters of Success", there are several lessons about success, which is linked, according to the work, to a personal plan that must be executed using the powers of the human subconscious.

So, how can I outwit the Devil?

You got to know the main aspects of this exclusive interview that Napoleon Hill had with the Devil. And you have also learned how to break the secret code of an evil mind. Now, how about a recap?

Did you like this summary of the book "Outwitting the Devil"?

Leave your feedback, as it is very important for us to offer better and better content.

And if you want to understand all the details of Napoleon Hill's book, it is available for purchase. Just click on the image below: 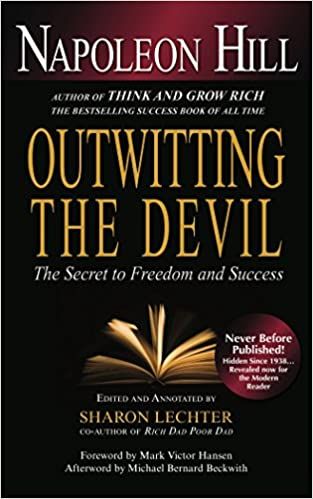