How do you find the strength and ability to change and elevate not only your life, but the world as well? Read this summary and find out!

Have you ever stopped to think about what death feels like? Plato has.

Among his many ideas, he said that the soul is immortal, and for it there would be no possible escape from its evils, no salvation, except to become better and wiser.

Furthermore, death would be to have a soul disconnected and set apart from the body. In "Practicing the Power of Now," Eckhart Tolle proposes the same idea.

Tolle believes that we are eternal, as there is a One Life that goes beyond the world of forms, our "real" world, and death. In this One Life, there is only Now because time is an illusion where the past no longer exists and the future is a lie.

By reading this summary the power of the Now and live forever it will be in your hands to discover.

About the book "Practicing the Power of Now"

The book "Practicing the Power of Now" was published on September 1, 2001, by the New World Library publishing house.

The work has 128 pages divided into three parts: accessing the power of now, relationship as spiritual practice, and acceptance and surrender

About the author Eckhart Tolle

Eckhart Tolle is the pseudonym of Ulrich Leonard Tolle, a German writer graduated from the University of London and a researcher at London University of Cambridge In addition to being an expert in the art of study of the inner self and focused on the importance of spiritual transformation for a better quality of life

He has also written 6 fantastic works, including his biggest success "The Power of Now", and it was extremely recognized on the show of the American presenter Oprah Winfrey.

The book "Practicing the Power of Now" is for you who want to find the strength and ability to change and elevate not only your life, but the world as well.

In addition, it's an excellent read for leaders who want to learn the hands-on way of "The Power of Now" in order to increase the positivity of their teams.

Main ideas of the book "Practicing the Power of Now"

PART I - ACCESSING THE POWER OF NOW

For Tolle, there is a One Life, eternal and ever-present, beyond the countless forms of life that are subject to birth and death. Sometimes 'God' is the word used to describe it, but he uses the word 'Being'.

However, both 'God' and 'Being' are words that explain nothing. 'Being', however, can even be considered an open concept. We often end up far away from this Being and to regain awareness of Him, we need to submit to "sense awareness", also known as enlightenment.

But, the word enlightenment conveys an idea of superiority that pleases the ego, but it is simply the natural state of feeling at one with the Being. Being a state of connection with something immeasurable and indestructible.

However, as we are not always enlightened, the inability to feel this connection arises which gives rise to an illusion of separation, both from yourself and from the world around you. This creates such a great disquiet that it prevents us from being serene.

The mental noise incessant prevents us from finding the area of inner serenity, which is inseparable from the Self. This causes the mind to create a false inner self that casts a shadow of fear and suffering over us.

How many times has mental noise generated noise in the communication you establish in your professional and personal life?

This noise creates fears, whether it's losing, failing, hurting us, but ultimately all fears boil down to one: the ego's fear of death and destruction.

Tolle's advice is: die to the past at every moment.

You can always face the Now, but you can never face the future or change your pace. The answer, the strength, the right attitude will be there when you need it, not before or after

So here are some tips for you to put into practice:

Author Eckhart Tolle states that most human suffering is unnecessary. Our superficial mind governs us to such an extent that it creates a form of punishment: non-acceptance, a form of unconscious resistance to what is.

Therefore, the human being tends to be escapist, since the mind always tries to deny and escape from the Now. Anyone who drank alcohol or used drugs to get "high" knows that high turns to low, that pleasure turns into some form of suffering.

Suffering comes in two forms: inactive and active. Suffering can be inactive 90 percent of the time, or 100 percent activated in someone who is deeply unhappy.

There are those who go through life almost entirely filled with suffering, while others go through it on occasional occasions.

Tolle is adamant that unless you tap into the conscious frequency of presence, all your relationships, especially the most intimate ones, will be deeply flawed.

There is a truth that cannot be denied: in life, there are cycles of success, such as when things happen and work out, and cycles of failure, when they don't go well and fall apart. You have to allow them to end, making room for new things to happen or change.

Tolle says that failure is always built into success, just as success is always covered by failure. Also, sooner or later, everyone "fails" and every achievement is actually a defeat.

Accepting the impermanence of things is an enlightened choice. And, consciously chosen enlightenment involves letting go of our attachments to the past and the future and making the now the focus of our lives.

Accepting means surrendering to the unpredictability of life and its misadventures. But don't blame life for treating you so badly, but don't blame yourself for anything either. This is all resistance.

Resisting is one of the most powerful spiritual practices, for when you deeply meditate on the mortality of physical forms, including yours, it's called dying before you die.

So here are some tips for learning how to be free:

Ken Robinson, in "Out of Our Minds" claims that emotional intelligence (EQ) is just as important as IQ. As thought and feeling controls are pillars of creativity, it is important to be emotionally calm.

The book "Essentialism", by Greg McKeown, also addresses the idea that less is more and that few things are really essential in your life. Therefore, you should focus only on what is essential.

Did you like this summary of the book "Practicing the Power of Now"?

Leave your opinion in the comments, your feedback is very important to us! In addition, you can access the complete book by clicking on the image below to buy it: 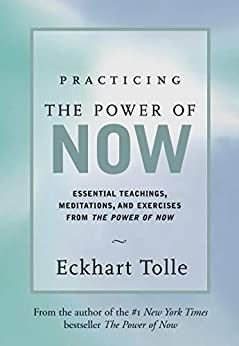