Have you ever made a wrong choice and, shortly after, regretted it and became desperate, wondering where you were with your head to do something like that? The fault may lie in irrationality!

As much as there are those who believe that a person can live only in a rational way, the experiments of the behavioral economist and author of the book "Predictably Irrational", Dan Ariely, showed that this is not the way things work.

Not all of our decisions are well thought out, intelligent and rational, and furthermore, we are not in complete control when we need to make an important choice.

Illogical and invisible forces can hinder our rationality and influence us not only to make silly mistakes, but also to repeat them.

Want to know more? So, continue reading this PocketBook and find out what drives us to make irrational decisions!

About the book "Predictably Irrational"

Over 280 pages, this bestseller from The New York Times, published by HarperCollins in 2008, reveals, through examples, narratives and experiments, the tricks preached by the human mind that generate misbehaviors and irrational choices.

About the author Dan Ariely

Behavioral economics researcher Dan Ariely has experience as a professor in the field at the Massachusetts Institute of Technology and a researcher at the Boston Federal Reserve Bank.

With publications in academic journals, he also had his work published in famous media such as The New York Times, The Wall Street Journal, The Washington Post and The Boston Globe.

"Predictably Irrational" is recommended for everyone who wants to learn to identify the source of their wrong and irrational choices and stop repeating such mistakes.

Download the "Predictably Irrational" Book Summary in PDF for free

Overview: Part 1 - Everything is relative

Since there is no internal measure that says how much things are worth, the focus is on the relative advantage of one thing over the other. So, the value is estimated accordingly.

Analyzing something in comparison to something else is not just for physical things, but also for experiences, like travel, and passing things, like feelings, attitudes and opinions.

The downside of relativity

While it helps us make decisions, it can make us feel bad when comparing our lives with others.

To combat this, the tip of the book "Predictably Irrational" is to stay away from situations that trigger these feelings.

This means going to another group when in a conversation someone brags about their high salary or does not look at houses over budget when looking for a property.

The influence of context

Most people don't know that they want something until they see it in context.

According to the explanation of the author Dan Ariely in his book "Predictably Irrational":

"We don't know what kind of racing bike we want - until we see a Tour de France champion adjusting the gears on a particular model."

Based on this, a restaurant has managed to increase its profits by offering expensive entrees, even if no one buys them. By creating the expensive dish, the restaurant prompted customers to order the second most expensive dish.

Author Dan Ariely tells the story of a pearl businessman who struggled to sell black Tahitian pearls, until he displayed them in a shop window on Fifth Avenue in Manhattan at an expensive price and next to diamonds, emeralds and rubies.

He also ran a full-page ad in magazines. Soon, the pearls ended up on the neck of the rich divas in the region.

An example of anchoring

The strategy of the black pearl businessman is an example of anchoring, since by "anchoring" his pieces alongside precious jewels, prices followed the trend.

Author Dan Ariely says in his book, "Predictably Irrational", that:

"Similarly, once we buy a new product at a particular price, we are 'anchored 'at that price."

The traditional economy says that product prices are dictated by the balance between production at each price (supply) and the desire of those with purchasing power at each price (demand).

The value at which these two forces meet is what determines the price on the market.

Although he classifies the idea as "elegant", Dan Ariely says that it depends on the premise that the two forces are independent and that together they produce the market price.

Winning free stuff feels good and is attractive. But "Predictably Irrational" calls the zero cost behind a free product "irrational enthusiasm". Things that a person would never consider buying become attractive, since they are distributed free of charge.

The influencing power of the term "free"

It was demonstrated by an experiment conducted by the author Dan Ariely and two colleagues.

When they sold Lindt truffles for 15 cents and Hershey's Kiss chocolate for a cent, 73% of consumers chose the former. It is worth mentioning that Lindt's chocolates are considered more refined.

When they lowered the price of truffles to 14 cents and that of kisses to zero, 69% chose free chocolate.

A free item becomes a problem when its presence prevents someone from choosing a product better or more suited to their need, as noted in the experiment above.

But what makes a free item so attractive?

For the author Dan Ariely, the fact that something is given for free makes its disadvantage forgotten.

"Free shipping gives us an emotional charge and we realize what is being offered as immensely more valuable than it really is."

The charm of free is based on the fear that the human being has to lose: once something is free, there is no risk of loss.

Promises to save money, go on a diet or exercise occur in the so-called cold state.

According to the book "Predictably Irrational", when a hot state of emotional excitement arises when we are faced with something we want to buy, a slice of cake or the desire to be tossed on the couch, the promises fall apart.

This act of giving up long-term goals for the sake of immediate satisfaction is called by Dan Ariely procrastination.

The cure of procrastination

He conducted an experiment with students, in which he divided the deadlines for delivery of work in three ways:

For Ariely, this showed that the external imposition of spaced deadlines was a cure for students' procrastination. When an external voice gives orders, most people pay attention.

Although external order is effective against procrastination, it is not always viable or desirable. Thus, for Dan Ariely, the best direction is to give people the chance to commit to the course of action they prefer, as in group 3 of the experiment.

According to him, although everyone has problems with self-control, there are potential mechanisms of self-control for each problem.

According to the author in the book "Predictably Irrational":

"If we don't feel like exercising regularly alone, we can schedule to exercise in the company of our friends."

In an attempt to keep open the options of what may be important, it is impossible to dedicate yourself to what really matters.

Example: spending money that could be used for other things, such as a computer that contains a lot of unnecessary functionality, or enrolling children in many classes, spending time and preventing them from becoming very good at a specific activity.

The need to keep options open

Author Dan Ariely questions why human beings are driven to keep so many viable options at the same time, even at great costs, and why it is so difficult to commit to just one.

"Running from door to door is a strange human activity. But stranger is the compulsion to pursue doors of little value - opportunities almost dead or of little interest."

Who has never bought something on sale not because it is necessary, but because at the end of the offer the item would be sold out and would no longer be sold for that price?

The problem of keeping so many options

As explained in the book "Predictably Irrational", it is that by leaving one option aside to try others, the first may no longer be available if the person understands that the others were not so good and wants to return to the first.

In addition, in his research, Dan concluded that running from one option to another can be uneconomical, stressful and draining emotions.

In "Principles", Ray Dalio clarifies to the reader that dreams, reality and determination help to achieve a successful life, by making the principles of life and work go together, with an open mind.

In the book "Focus", the author Daniel Goleman says that the more our focus is interrupted, the worse our performance in relation to the task we are performing. On the other hand, our ability to learn improves with focused attention.

When we aim only at what we are learning, the brain disposes that knowledge among what we have already mastered, creating new neural connections. Without focus, no information of what we are trying to learn is saved.

Finally, in "Essentialism", author Greg Mckeown says that when we try to do everything and have everything, we make concessions that move us away from our goal.

If we don't decide where we should focus our time and energy, other people - bosses, colleagues, customers and even the family - decide for us, and soon we lose sight of everything that is significant.

Did you like this summary of the book "Predictably Irrational"?

We hope you enjoyed our summary and learned about the mind's irrationality mechanisms. Leave your opinion in the comments, your feedback is very important to us! 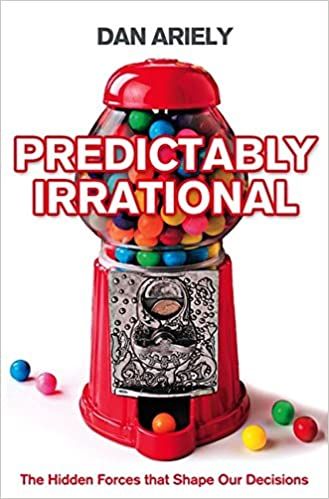