Discover how the skill of selling should be part of who we are and learn tools, tips, and recommendations to be more effective in your persuasion.

The author Daniel H. Pink brings, in his work “To Sell is Human: The Surprising Truth About Moving Others”, tools, tips, and recommendations for you to become more effective in inducing others.

Have you ever found yourself selling ideas to colleagues, influencing people, persuading investors, or flattering children to convince them?

So, you, in a broader sense, are spending more time selling than you think!

Continue reading, as we will explain all of these methods that are discussed throughout the book.

The book “To Sell is Human”

Written by Daniel H. Pink, “To Sell is Human: The Surprising Truth About Moving Others” (2013) is a 272-page work divided into 9 chapters.

The book addresses the fact that at all times we are selling something, either through traditional selling, in which there is a commercial trade of product/service for a certain value, or by selling without selling, where there is a dynamic of induction and persuasion, involving products or ideas.

Who is Daniel H. Pink?

Daniel H. Pink, born in 1964 in the city of Bexley, Ohio, received a law degree from Northwestern University, having subsequently received a graduate degree from Yale Law School and worked as Editor-in-Chief of the Yale Law & Policy Review.

Between 1995 and 1997, he was Chief of Speech for Vice President Al Gore and, in 1997, he left his political career to become an entrepreneur, an experience he describes in an article for Fast Company, the Free Agent Nation, and which became the basis of his first book.

For the past six years, the London-based Thinkers 50 has appointed him, along with Michael Porter and Clayton Christensen, as one of the top 15 business thinkers in the world.

Check out the summary of two of his other works:

Why should I read “To Sell is Human”?

“To Sell is Human: The Surprising Truth About Moving Others” is suitable for everyone because, as Daniel H. Pink explains, we are all in a constant sales process, that is, selling is part of human nature, and this is intrinsically linked to our daily activities, to our daily lives.

Thus, this book is recommended for those who believe it is extremely important to know the best tools to improve these constant sales processes, because, in this way, it is possible to improve interpersonal relationships, influence people, and effectively transmit ideas and knowledge.

What can I learn from “To Sell is Human”?

In this summary, we will explain the 3 aspects defined in the book to build a great company: disciplined people, disciplined thinking, and disciplined actions.

Part I – A salesperson’s rebirth

In the opening part of the book, Daniel presents arguments to encourage us to question the way we know the sales process:

Now we’re all in sales

The author Daniel Pink essentially shows data that prove that even with today’s digital world, the sales market is still very busy and, besides that, every human being participates in this type of process in one way or another.

In the United States alone, for example, 1 in 9 workers still make a living trying to get people to buy products they have to offer.

Also, the author clarifies that the other 8 of these 9 are in constant sales processes, the so-called “sale without selling”, as they are persuading and influencing people.

For Daniel H. Pink, sellers are not dead, they are alive because they are us!

According to an unprecedented survey, we are dedicating more than 40% of our time at work to inducing others. And we consider this to be crucial to our professional success.

How did so many of us end up in the induction business?

The second chapter of the book “To Sell is Human: The Surprising Truth About Moving Others” answers this question from 3 main points:

With the increase of investments in technology, the tools that were created and that were supposed to destroy salespeople, instead opened up to small entrepreneurs and turned many of us into salespeople.

Many of us are realizing that our professional skills need to extend and overcome previously created barriers, encompassing traditional sales and, above all, sales without sales.

It is a sector that includes the fastest growing industries in the world, medical and educational, and its jobs are related to the induction of people.

In the end, Daniel Pink says that the sales sector doesn’t really have a good reputation, however, this concept is being transformed more and more.

The author Daniel H. Pink deconstructs the idea that sales are synonymous with cheating and deception.

The balance of buyer-seller power has shifted as we move from the need for the buyer to always be alert to risk, to that of the seller to always be careful. Honesty, integrity, and transparency have become the only viable path.

When buyers know more than sellers, sellers are no longer the protectors and providers of information. They only clarify, giving the temporal meaning of facts, data, and opinions.

If the seller no longer has an information advantage and the buyer has the means and opportunity to interact, the lower path becomes more difficult to pass, and the upper path – of honesty, integrity, and transparency – becomes the best route, the most pragmatic and long-term.

In the second part of the book “To Sell is Human”, the author presents the three most important qualities to convince someone:

Finally, Daniel H. Pink, in a practical and objective way, describes the skills that matter most when selling:

The pitch has the purpose of presenting an idea that is striking enough to arouse the interest of the buyer so that a conversation starts, reaching an outcome that pleases both parties.

Today, however, attention spans have shrunk and everyone is looking at their phones, which has made this technique outdated.

In chapter 7 of the book, the author presents the possible successors of the elevator pitch:

Associate your brand with a single word. When anyone says that word, they will think of you.

According to the book “To Sell is Human: The Surprising Truth About Moving Others”, unlike when something is stated, when a question is asked, people are obliged to answer it out loud or in silence, demanding at least a little effort on their part, urging them to come up with their own reasons for agreeing or not.

Rhymes drive our minds to make sense of the stimulus, helping information to be processed more easily and emphasizing reason.

Only with a sentence that encompasses the principles of utility, curiosity, and specification is it possible to draw the buyer’s attention to the whole proposal.

Twitter is used as a platform and its character count as a limit on eloquence, to avoid prolixity and to be quick, painless, and straight to the point, encouraging the continuation of the conversation.

It focuses on the format of only six sentences to reproduce a speech. Being such a malleable and attractive format and, at the same time, being within a framework that forces conciseness and discipline.

The author points out in his book that traditional sales and sales without sales are mainly based on services.

However, service is more than just smiling at customers or treating them well: it is making it personal, improving the lives of others and the world. When inducing people, you need to achieve something bigger, more meaningful and lasting than just an exchange of resources.

Books about persuasion and sales

In “Influence: Science and Practice”, the author Robert Cialdini delves into the idea of personal marketing, providing tools on how to influence people with ideas, which, in a negotiation, is extremely important.

Thus, the book is based on 6 psychological principles that influence the customer’s purchase decision to instruct salespeople and marketers in winning a purchase.

In the book “How to Win Friends and Influence People”, Dale Carnegie also talks about praise as a way of influencing: one of the strongest characteristics of human behavior is the desire to be valued by other people; we all like to receive compliments and hear that we are doing a good job.

Finally, in “Contagious: Why Things Catch On”, the author Jonah Berger clarifies that mental triggers are intended to allow your brain to function better, without an overload of information.

They serve to link one thing to the other, that is, when we talk about a certain thing, we automatically remember another, making that connection between them and, thereby, increasing their power of persuasion when negotiating their sales.

How can I apply the ideas from “To Sell is Human”?

After reading the work, we can clearly see the practical points we can apply:

Rate the book summary of “To Sell is Human”

Did you like our summary of “To Sell is Human: The Surprising Truth About Moving Others”? Leave your feedback in the comments!

Also, if you are interested in the book, you can buy it by clicking on the image below: 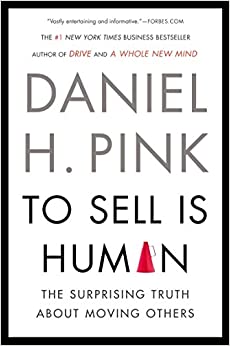