Learn the story of the man who revolutionized American retail trade!

A few years before the end of his life, Sam Walton decided to leave his history and the legacy of his company, Walmart, recorded in the autobiography, "Sam Walton: Made in America", which was written in partnership with the author John Huey.

Those who regard Walmart's success as instantaneous, a stroke of luck for Walton, are unaware of the years of hard work that transformed their small grocery store in the interior of the United States into the largest retail chain in the world.

Here, you will find lessons that, even after so many years, remain essential for the career of any successful entrepreneur.

Want to know more? So, continue reading this PocketBook and discover the key to Sam Walton's success!

The book "Sam Walton: Made in America"

"Sam Walton, Made in America: My Story" is a collaboration between Walmart founder Sam Walton and writer John Huey, being originally published in 1992.

In an intimate tone, and filled with comments from his family and associates, Walton shares his story, philosophy of life, and perspectives for the future of Walmart and the world.

Who are Sam Walton and John Huey?

Sam Walton was a humble and ambitious man who dedicated his life to the success of his retail store chain, Walmart. In 1985, he was named the "richest man in the United States" by Forbes magazine.

John Huey is an American journalist with experience in Economics. Graduated from the University of Georgia, he currently works with major publications, such as Fortune, Time, and The Wall Street Journal.

"Sam Walton: Made in America" offers relevant tips for those looking to be successful entrepreneurs, especially in the retail business.

What can I learn from "Sam Walton: Made in America"?

Are you prepared to know the history of Walmart? So, come on!

Download the "Sam Walton: Made in America" Book Summary in PDF for free

The richest man in the United States

Samuel Moore Walton was a born entrepreneur. In his book, "Sam Walton: Made in America", the founder of Walmart claims to be, in many of its basic values, such as religion, family and politics, a conservative.

When it comes to business, however, he has always been inclined to reject the system. Change is an integral part of his philosophy.

The work begins by talking about his youth in Missouri and his childhood and adolescence achievements. Walton was a good student and a talented athlete. At this point in his life, he learned, through sport, the importance of teamwork.

According to author John Huey, in 1940, Sam got a job at the department store "J. C. Penney", his first contact with retail trade. There he worked for about 18 months.

After that, he moved to the city of Claremore, where he met Helen, his wife. They got married a year later, on Valentine's Day.

In 1945, after a brief stint in the army, Sam Walton started his venture in the retail business. In his last military assignment, he studied as much as he could about retail and department stores. So there was still to decide where to settle.

Sam Walton began by buying, for $25, 000, a "Ben Franklin" chain store in Newport, Arkansas. The business reopened on September 1, 1945, and in five years it became the most profitable franchise not only in Arkansas but in the entire six-state region.

Running a "Ben Franklin" franchise, Sam learned that marketing is a basic principle in the retail world: by lowering the price of a product, you can profit more because of the higher sales volume.

The beginning of his journey is marked by a practice that has become a fundamental part of Walmart's philosophy: the search for goods directly with manufacturers. At the end of the day, after closing the store, he would tour the surrounding states, filling his car with everything he could get at a good price.

The success of "Ben Franklin" attracted the attention of profiteers. Due to a legal error in his rental agreement, Sam was forced to sell his first store to his landlord. Seeing each setback as an opportunity, the Waltons decided to start over in a new city.

According to author John Huey in the book "Sam Walton: Made in America", it was then that they moved to Bentonville, a city that a few years later became the headquarters of Walmart. As soon as he settled in the city, Sam started looking for opportunities to expand his business to nearby cities.

In the 1960s the concept of gift shops, or discounts, spread across the United States. Following this trend, Sam Walton endeavored to create the first Walmart, opened in 1962, in Springdale.

As explained in the book "Sam Walton: Made in America", the company was still small, so it did not compete with the large retail chains.

In the beginning, it did not have a basic assortment of goods. The system was precarious, but the company was growing due to the low price of its products. Another way to compensate for the lack of experience and sophistication was to analyze the competition's strategies as much as possible.

Author John Huey says that the years have passed and the business has narrowed. Companies that did not meet their customers' needs and that had not built strong organizations began to close their doors.

Contrary to common sense at the time, Walmart became the largest independent offal company in the United States.

Realizing that the company had become too big, Sam hired trained professionals to develop the management and infrastructure of his business. He considers that time, between 1968 and 1976, the most important phase of the development of Walmart.

The Walton family incurred a lot of debt - about $2 million - to guarantee Walmart's growth. Realizing that he was not making enough profit to cover the costs of expanding the stores, Walton and his partners decided to examine the possibility of going public.

On October 1, 1970, Walmart became a public limited company traded on the black market. The Walton family took 61% of the company and was able to pay off its debts. The IPO expanded the company's growth prospects.

Walton was then able to begin his strategy of expansion into small cities in the United States, which did not attract the interest of large gift shops.

According to the book "Sam Walton: Made in America", stores were distributed so that they could be controlled by the company's distribution centers.

Sam Walton was not concerned with stock fluctuations. He stated that Walmart continued to prioritize the quality of customer service and the cost of products, with the appreciation of its actions a direct consequence of this.

The organization achieved a steady growth rate that satisfied investors.

The culture of Walmart

Throughout the history of retail in the United States, many businesses have emerged, but few have been successful. This was because several of these companies grew rapidly, without developing the organization and support needed for expansion.

In the corporate culture of Walmart, the result of its beginning in small cities, some basic principles stand out:

Author John Huey explains in the book, "Sam Walton: Made in America", that one of the key factors for Walmart's success is that, since the beginning of the company, its directors have met weekly to jointly analyze the finances of their respective stores, reviewing what they bought and how much they spent.

As Walmart grew, these meetings became part of its corporate culture. Currently, the company operates in conjunction with its suppliers to guarantee the most viable costs and margins.

In the initial phase of Walmart, the company was ignored by distributors and wholesalers due to the remote location of its stores. Therefore, it had to organize its own distribution system, which ended up being a competitive advantage, due to the consequent flexibility, agility, and economy.

When they joined the company, Ron Mayer and Royce Chambers brought with them sophisticated communication and distribution systems that made Walmart's national projection possible, as they allowed a concentration of goods, which were now stored in the distribution center and redirected to stores.

Walmart is a great example of what happens when thousands of people come together as a group, with an authentic feeling of society, and are able to put individual needs after the needs of their team.

To ensure productivity, Walmart has several ways to reward the work of its associates, such as a profit-sharing plan and other financial association programs, bonuses on loss control expectations, and incentives for formal education for its directors.

Sam Walton emphasizes in his book, "Sam Walton: Made in America", that just that is not enough. It is essential to create a feeling of association with your employees, to share information and responsibilities so that everyone feels a part of the company's success.

In short, establishing a good balance between autonomy and control.

The success of a gift shop depends on customer satisfaction, through good service, attractive prices, and, above all, an adequate inventory of your needs. Each region served by Walmart has specific and distinct needs, so stores must be planned separately.

Sam Walton spent part of his time visiting stores and listening to his associates' ideas. He says that the bigger a company gets, the more essential it is to think small. The individual focus allows the positive and negative aspects of each store to be identified.

In "Principles: Life and Work", Ray Dalio explains how dreams, reality, and determination will help you achieve success by making the principles of life and work go together, with an open mind.

For this, Ray will make you understand how your mistakes have contributed to your growth because it is this evolution that will lead you to victory.

In the book by Brazilian businessman Flávio Augusto, "Value Generation", he clarifies how, instead of just working for capital, it is also important to generate value for customers. By generating value in other people's lives, they will generate value for you.

Finally, in "Out of The Maze", author Spencer Johnson shows how to become a winner, by overcoming the mazes that prevent you from reaching bigger goals, understanding your mistakes, and what led you to them.

For that, you will see how to get rid of the fear of looking back, understanding your failures to go ahead: achieving victory!

How can I apply this to my company?

Did you like this summary of the book "Sam Walton: Made in America"?

We hope that this biography will be useful for your personal enterprise. Leave your opinion in the comments, your feedback is very important to us! 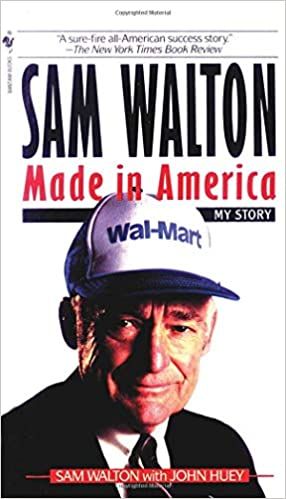