The book "Sapiens", by Yuval Noah Harari, narrates the human trajectory, from the Stone Age, the emergence of homo sapiens, development of cognitive capacity, the birth of money and human rights, to the present day, explaining the importance of scientific advances for society.

This PocketBook proposes you to reflect on your existence, telling how our species got organized until we became a globalized society in the 21st century and the factors associated with it.

Want to know more? Then read on and discover the history of humanity from an innovative perspective!

About the book "Sapiens: A Brief History of Humankind"

The book "Sapiens: A Brief History of Humankind" was first published in 2011 and, since then, it is a great success, with more than 10 million copies sold around the world.

Harari's work has already been translated into almost 50 languages and has been named one of The Sunday Times' top bestsellers, making it into the Top 10 New York Times bestsellers.

Throughout its 464 pages, the book retells the history of human beings from a new perspective and brings reflections on our behavior, evolution, and leadership.

About the author Yuval Noah Harari

Yuval Noah Harari was born in 1976, in Israel, and he is a professor at the Department of History of The Hebrew University of Jerusalem.

Twice winner of the Polonsky Prize for Creativity and Originality (2009 and 2012), Yuval Harari has already given a speech on the future of humanity at the World Economic Forum in Davos.

He has also written for major newspapers like The Guardian, The Financial Times, and The Wall Street Journal.

Today, Professor Harari travels around the world giving lectures on subjects that have been discussed in his books and offers his knowledge to a lot of organizations and audiences voluntarily.

Check out his other works:

"Sapiens" is ideal for historians, anthropologists, students, and people interested in the subject who seek to understand the evolution of the human being and society over time.

Main ideas of the book "Sapiens: A Brief History of Humankind"

Download the "Sapiens: A Brief History of Humankind" Book Summary in PDF for free

We human beings were able to lead Earth in a short time (if we think about the age of the planet). And the projection, seen from the ambition of homo sapiens, is increasingly expanding.

About 200 thousand years ago, homo sapiens ( "wise man") appeared in East Africa. However, sapiens was not the only existing species. Among them, other types of humans lived around the world, such as homo neanderthalensis and homo erectus (which survived for almost 1.5 million years).

But somehow, homo sapiens stood out from the rest, spread and today thrives. How? Why?

There are two theories addressed by author Yuval Noah Harari, which attempt to explain this event:

It turns out that several advantages led sapiens to be the leader of their kind. And they all have to do with the brain.

The cognitive ability of homo sapiens was enough to develop skills that other species were not capable of, such as organizing themselves in small groups, go hunting, or exchange tools.

From there, they spread beyond Africa. While exploring other continents, they also destroyed them. Sapiens were responsible for the extinction of several species and extinguished megafaunas in Australia and America. Well, old habits die hard.

And they didn't stop there. Soon afterwards, communication was developed in the form of language. In this way, they became much more capable of spreading knowledge and techniques quickly.

About 12 thousand years ago, humans lived migrating from place to place, staying where they had food until they had no more. This nomadic life ceased after The Agricultural Revolution.

As the author shows in the book "Sapiens: A Brief History of Humankind", agriculture made it possible to develop parallel skills, such as making tools and fabrics. Hence, they improved the trading system, exchanging food for useful items.

But this process wasn't fast. Yuval Noah Harari explains that this radical change in the way of living took about 10, 000 years until almost all species passed from mere nomads to farmers, and could store food in large quantities in their own homes.

As a consequence, an exchange trade was being shaped, but after a while, it proved insufficient.

Overview: The Unification of Humanity

The sapiens then had the idea of exchanging their objects for a universal product. This could be used to buy anything else they wanted. That's where the money came from.

The recording of transactions was done through another resource created: writing. With that, it became simpler and more reliable to exchange your product for whatever you wanted, when you wanted and in the desired quality.

As it is affirmed in the book "Sapiens", money and writing made business transactions more efficient. But even so, the population grew and became more difficult to control.

To solve this problem, humans then created hierarchical systems, consisting of laws and leaders to ensure that people obeyed them.

The choice of these leaders, usually emperors, came from a greater force (gods). Also, the laws were based on the wishes of the gods... or at least that was the reason used so people would accept without questioning.

In any case, imperial domination caused them to generate "artificial instincts" in society that unified people. Diverse ethnic and religious groups clustered together, to live effectively as a society, under certain standards.

For the author Yuval Noah Harari, it is not difficult to associate this with Eurocentrism. Several countries in Europe influenced others with their ideas of habits, laws, and culture, especially at the time of colonization.

And today, we still have to deal with it, even though European empires have long since ceased to exist. But how exactly did Europe become a global reference?

According to the book "Sapiens", most people believed in the power of a supposed god, and this prevented the human being from acquiring more knowledge and making scientific advances.

When people started thinking about how they could improve society through science, the pessimism about themselves and their dependence on believing in a god started to have less effect.

Then, from the 16th century onwards, Europe went through a Scientific Revolution, in which scientific studies were highly invested. European leaders were quick to realize that it contributed significantly to the country's economy.

Science and globalization helped capitalism to settle in various cultures around the world. It is not difficult to see that we are sustained by a culture of consumption, in which most people live for money and material goods.

Harari states that globalization has helped the world to become a more developed and peaceful place. On the other hand, he asks: "Are we happier?"

At the individual level, probably not much more. On a social level, we are likely to be happier. But it depends on who we are, too. Although we have evolved considerably, some old precepts still put certain social groups (black people, women, etc.) at a disadvantage.

Overview: The Future of Humanity

What will come in the future? How far will our scientific advances take us?

Studies already show that we are getting closer to a new era. The development of prostheses and genetic mutations are great advances in the scientific field.

However, science faces ethical and legal issues to move forward with its progress. The question that remains is: how valid are these impediments?

As Yuval Noah Harari says, many advances that are normal today have been seen as absurd in the past.

We are on the way to becoming another type of human species. Today, we are already a partial union of the human with the machine.

What about tomorrow? What can we expect from the "superhumans"?

For Tom Chatfield, there is a close relationship between humans and technology. In the book "How to Thrive in the Digital Age", he says that along with the advances, human beings have shaped new technological tools and these, in turn, have shaped their behavior.

Speaking about changes, in the book "Factfulness", the authors Hans, Ola, and Anna Rosling say that today we have an instinct to believe that things don't change anymore, and that prevents us from seeing many advances that are happening.

At last, in the book "The Big Nine", the author Amy Webb shows how artificial intelligence has given us great benefits. However, some global powers use it to invade privacy and to have authority over people. Amy says that if we continue like this, humanity will face an obscure future.

Did you like this summary of the book "Sapiens: A Brief History of Humankind"?

We hope you enjoyed the studies of Yuval Noah Harari. Leave your opinion in the comments, your feedback is very important to us!

To learn more about it, you can buy the book by clicking on the image below: 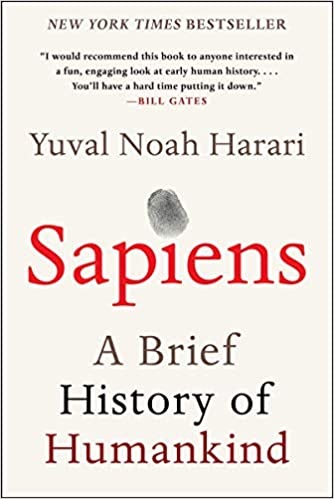