Don’t be left behind! See how Scrum, the agile and adaptable structure, can revolutionize your projects.

Learn more about the framework that was applied in companies like Google, Amazon, and Microsoft, in the book "SCRUM: The Art of Doing Twice the Work in Half the Time", directly with one of its creators: Jeff Sutherland.

Sharing success stories of the use of Scrum in the most varied companies and even in school education and in non-profit humanitarian aid organizations, Jeff Sutherland shows the power of the approach to adapt and produce positive impacts for all involved.

Get inspired by the agile culture and see the fundamentals of Scrum in this summary!

About the book "SCRUM: The Art of Doing Twice the Work in Half the Time"

The book "SCRUM: The Art of Doing Twice the Work in Half the Time" was written by Jeff Sutherland and published in 2014, by Currency.

Scrum is an agile, adaptable, and self-corrective framework that was created in 1993 for software development, aiming to overcome the difficulties and disadvantages of the waterfall model.

With the goal to take Scrum to the business sectors and revolutionize different companies, Jeff Sutherland indicates, in this book, the concepts for the application of this approach.

About the author Jeff Sutherland

Jeff Sutherland was born in 1941, in the United States, and for 11 years he followed a military career, having graduated from West Point Academy.

After that, Jeff obtained his Ph. D. in Biometrics, Radiology, and Preventive Medicine, at the University of Colorado School of Medicine, where he worked with systems development and data collection and analysis.

Together with Ken Schwaber, Jeff Sutherland created Scrum and was also the co-author of the Agile Manifesto. He is currently dedicated to disseminating the structure as an agile coach, CEO of Scrum Inc. , and president of Scrum Foundation.

The work "SCRUM: The Art of Doing Twice the Work in Half the Time" is recommended for managers from various sectors who wish to join the Agile Manifesto, make their companies more adaptable and their projects more agile and continuously improved according to the customer needs.

Main ideas of the book "SCRUM: The Art of Doing Twice the Work in Half the Time"

Download the "SCRUM" Book Summary in PDF for free

Overview: The need for a new way of thinking

The author Jeff Sutherland shows, in the book "SCRUM: The Art of Doing Twice the Work in Half the Time", how the lack of technological advances in the FBI's internal intelligence service made the 9/11 terrorist attacks unpredictable.

Recognizing the difficulty of access and lack of information sharing, the agency sought to modernize its system, initiating a first improvement project.

After three years, this project was canceled because it didn't work and a second one, called Sentinel, started with the company Lockheed.

The project's planning was presented in detail, using waterfall methods and showing defined dates and schedules using a Gantt chart, a tool created during World War I.

However, after years of development and investments, the system was still far from complete. The large number of defects that arose and the inability to resolve them indicated the need for a new way to approach the project.

The name comes from rugby and refers to the way the team advances the ball in the game. Therefore, in Scrum the team works together, being aligned, and focused on a clear objective.

Through regular analysis of the project's development, the experience acquired by the team, and the contact with the client, the structure allows the identification of potential improvements and changes.

Thus, the idea behind Scrum is an "Inspection and Adaptation" cycle, in which reviews of what is being done are carried out with a certain frequency to verify the need for that task or how to improve it, as the author Jeff Sutherland indicates.

Back to the FBI

Jeff Johnson, assistant director of the IT Engineering Division, and Chad Fulgham, CIO, decided to take the Sentinel project internally. So, they applied Scrum and started by reducing the team and prioritizing requirements, identifying the most valuable items in the system.

The development team selected the tasks with the highest priority and committed to delivering them in full operation at the end of a given period, called the Sprint. And, at the end of each sprint, the team members asked themselves:

Based on this analysis and the workers' self-organization, Jeff Johnson and his team successfully completed the project in 20 months.

Overview: The origin and foundations of Scrum

The author Jeff Sutherland tells that in the Air Force he learned that risk control involves the steps of observing, evaluating, deciding, and taking action.

Years later, during one of his professional experiences, he worked near Rodney Brooks, one of the founders of a robotics company, iRobot, that created robots with the ability to learn their functions each time they were activated, following a series of rules and simple instructions.

Jeff says he remembered the four lessons learned in his training and envisioned self-organizing teams that would learn and improve by following a set of clear guidelines.

Inspired by this idea, he continued his career at a company called Easel, where he was challenged to develop new products in only six months.

Knowing that it would not be possible to carry out such a project based on the waterfall model, that was commonly used, Jeff Sutherland and his team, after studying projects and team organization, developed the Scrum framework, based on the lessons that great companies have:

Thus, Scrum is the way to put into practice the values present in the Agile Manifesto, as the author says:

"Individuals and interactions over processes and tools; working software over comprehensive documentation; customer collaboration over contract negotiation; responding to change over following a plan."

Scrum is based on some techniques applied in Japanese industries, such as the PDCA cycle, proposed by W. Edwards Deming and which revolutionized Toyota:

As Jeff Sutherland affirms, insisting on a method that aims to have everything previously planned in the smallest details and works under "command and control" just doesn't work anymore, it just leads to the failures experienced by many companies.

For this reason, the author reinforces: change or die. An adaptable methodology is needed in an ever-changing world.

Evaluating each delivery of the project with the customers allows the team to be more aligned with their requirements and that changes and improvements are made with the aim of really producing what they want and with the highest possible quality.

According to what is explained in the book "SCRUM: The Art of Doing Twice the Work in Half the Time", the Shu Ha Ri concept, originated in the martial arts, consists of:

Jeff Sutherland relates this to Scrum, as it is a framework that, after learning in practice, starts to work naturally.

The author Jeff Sutherland stresses the importance of prioritizing in Scrum because by allowing one task at a time to progress, classified according to its importance and added value, the focus and productivity increase.

To determine the effort required to perform a task, the "Planning Poker" is explained in the book, a quick and simple method that consists of providing numbered cards to each member.

Then, as each task is revealed, members present, at the same time, a card with a number that indicates the effort required to complete it.

If each member has a different but close number, the values are averaged. If the difference between the cards is greater than 3, the people who selected the highest and lowest value cards explain the reason for their choice, and the round is repeated to reduce that difference.

Another principle of the framework is that we should try to get things done right the first time, but if an error appears, it has to be solved immediately.

In the book "SCRUM: The Art of Doing Twice the Work in Half the Time" the functions of each role within the agile Scrum are presented:

In the Scrum framework, there is no separation of positions in the teams. Each team has members with the necessary skills to design, build, and test the product, and everyone participates in the development process from the beginning to the end.

For this reason, teams are multifunctional, so that the diversity of backgrounds, strengths, and experiences of each one is complementary to the characteristics of the others.

The Scrum Master is someone who has a mastery of the Scrum structure, acting as an advisor and as a facilitator, and the goal to help the team identify and deal with the impediments that arise throughout the project.

This person also guides, at the end of each Sprint, to the following questions that enable the continuous improvement of everyone's work:

The Product Owner is in contact with the stakeholders, receiving the opinions, and feedback from customers. With this information, this person is able to transmit to the team the vision and decisions related to the development of the project from the client's point of view.

Also, this role needs to explain to the team what should be done and for what reason, but who decides how it will be done is the team.

The Product Backlog is a list made by the Product Owner that contains all the tasks that are performed by the development team. Before each sprint, the team selects, in the Product Backlog, the items they will produce, thus forming the Sprint Backlog.

With the development team, the Product Owner also decides what the "end" of the work means, its completion, known in Scrum as the Definition of Done.

As author Jeff Sutherland explains in the book "SCRUM: The Art of Doing Twice the Work in Half the Time", the phases organize the project's objectives and the division of tasks. Learn more about them:

In "The One Thing", Gary Keller and Jay Papasan show how prioritizing and focusing on one activity at a time increases your performance and brings better results.

Paulo Caroli, in the book "Lean Inception", explains that presenting the minimum viable product (MVP) is a way of verifying the interest in that project and validating the premises built on it. Thus, improvements can be developed quickly and inexpensively.

And if you want to test your product before delivering it to customers, to capture their perceptions for opportunities for improvement, with the book "SPRINT" you will build one in five days.

After understanding the Scrum concepts and phases, seen throughout this summary, here are some practical ways to get started:

If you want to take Scrum to your workplace, but are finding resistance to the adoption of the agile mindset, a tip is to show the benefits and advantages, sharing successful cases, and presenting the results on a pilot scale.

Did you like this summary of the book "SCRUM: The Art of Doing Twice the Work in Half the Time"?

Are you convinced to adopt Scrum in your projects? Tell us in the comments, your opinion is very important!

To learn more about the framework and see the lessons of the author Jeff Sutherland in detail, purchase the full version of the book by clicking on the image below: 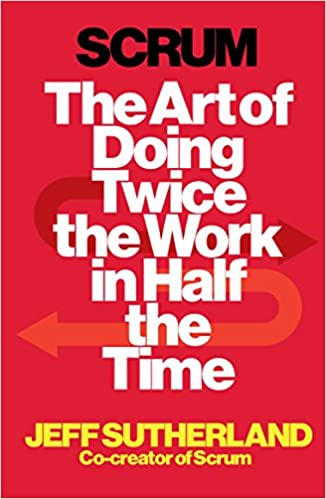