Checkmate! Learn the rules of negotiation, plan your best strategy, and convince people to give you what you want.

If you want to improve your negotiation performance, recognize unethical tactics, and practice the strategic principles that drive a great negotiator, the book "Secrets of Power Negotiating", written by Roger Dawson, was made for you!

It offers a guide for you to improve your persuasion power, analyze different situations that involve a negotiation, besides giving tips on how to understand your opponent's body language.

Want to know how? So stay with us on this PocketBook and convince anyone to give you exactly what you want (or even more)!

About the book "Secrets of Power Negotiating"

"Secrets of Power Negotiating" is a book that shares the expert knowledge of Roger Dawson about the art of dealing with people during business negotiations.

With 352 pages, this guide has many secrets divided into different aspects of negotiating.

About the author Roger Dawson

Roger Dawson is a negotiating expert and speaker. He has traveled the world to teach business leaders how to close successful deals, expanding their profits.

With all his accumulated knowledge and more than 30 years of experience, he is known as "the greatest negotiator in the USA" by SUCCESS Magazine.

The content of the book "Secrets of Power Negotiating" is intended not only for leaders who want to generate more profits in their business but also for anyone who wants to succeed in corporate deals, master the art of negotiation, and avoid being fooled.

Main ideas of the book "Secrets of Power Negotiating"

The first fundamental secret is that you don't show your game, as the other person doesn't need to know the rules, according to the book "Secrets of Power Negotiating".

The initial moves will determine whether you will win or lose. Carefully evaluate your opponent's information before taking an approach.

On your first move, ask for more than you can have, recommends the author Roger Dawson. This move causes a "comfort" in the opponent's field, which will probably demand more from your proposal.

Maybe the person won't require anything... which is perfect! You get what you ordered and that's it.

Did your opponent propose an offer? Don't accept it anytime soon. If you are not satisfied with the proposal and think you can do better, say that you will check on the pricing or marketing board.

You don't have to accept the first offer right away. As much as you are tempted and / or think you are doing the best deal, always think that you can do more.

Avoid conflicts. It is important that the environment is friendly, so (at least in the early stages of the game) don't argue.

If the adversary, be it another person or company, shows hostility, demonstrate empathy to neutralize it. This smart move is crucial for the opponent to feel identified, and especially for you to compose yourself and think better about it.

As Roger Dawson affirms in the book "Secrets of Power Negotiating", arguing intensifies the other's desire to prove they are right.

If they tell you they need something better than your offer, you should ask how this "better" would be. Hence, you can get a specific view of what the other person wants.

Once you have established the initial stage of the game, it is time for you to keep the momentum on your side.

The author Roger Dawson explains that you will face pressure from different variables that will be imposed. The important thing is that you remain in charge.

You may be dealing with someone who has no power to make the final decision. However, it may be that this is just a tactic, after all, that person may be playing, just as you are.

Let go of your ego and don't let that person know that you have the authority to make a decision. If necessary, inflate the other person's ego to find out whether they are lying or not.

According to the book "Secrets of Power Negotiating", some negotiations may encounter certain impasses that make it difficult to reach an agreement. At these times, shift your focus and talk about other things. This will save you time.

Also, if you are asked for a concession, don't ask for anything specific; ask what you will get in return.

At this stage, it is important that the negotiation is in accordance with your wishes, but awakening that feeling of victory in the opponent is also essential.

The tip given by the author Roger Dawson in his book, "Secrets of Power Negotiating", is to be careful when making concessions to the other party, as this generates a certain expectation.

Narrow them down to make your opponent understand that you are doing your best.

If someone is acting in bad faith and offers you less than you deserve, you can withdraw extended concessions or say that your "top authority" is not flexible about this.

Make concessions at the right time. Congratulate your opponent. Such attitudes lead to easier acceptance. But be careful not to flatter too much and end up in a bad situation.

There are some tactics that people can throw at you that will get you out of focus to get what they want.

Be alert if someone creates a problem about the offer, and then try to exchange for something that really interests you.

Ah, are you the buyer? Then ask for details of the proposal.

However, Roger Dawson alerts that what you can use can also be used against you. Learn to circumvent both situations.

There are other unethical moves, such as making mistakes on purpose, omitting, or even inventing information. The action of these moves depends on your nature regarding the game (and life). But knowing how to strike is essential to avoid those who try to cheat.

Have the other side of the negotiation say their price first. It may be that their offer is better than expected, but not being the first one puts you in a position of advantage: you will have information that allows you to eliminate the differences in proposals.

As the author Roger Dawson affirms in the book "Secrets of Power Negotiating", this move makes the opponent underestimate you, or help you, without realizing that you are actually counting the advantage.

It is worth mentioning that whoever writes the contract is ahead. Don't forget to always read it carefully, focus on what matters, and congratulate your opponent. Make them believe they did a good deal.

Overview: How to get out of a dead-end

According to the book "Secrets of Power Negotiating", both parties to a negotiation may experience certain headaches, such as the aforementioned impasses.

Fortunately, there are solutions to this type of problem. For this, it is necessary to add a third element in your (attempted) negotiation: a mediator or an arbitrator.

The presence of a mediator specialized in the area has grown in the negotiations. It is important in these cases because this person:

The arbitrator, in turn, after analyzing arguments on both sides, determines who wins and who loses, explains the author Roger Dawson.

But, above all, it is crucial that you have an open attitude to understand the other side, even if you don't agree.

Overview: Why it is better to negotiate in person

The author Roger Dawson clarifies in "Secrets of Power Negotiating" that most of the negotiation happens through non-verbal communication.

Studying body language gives you the ability to know whether your opponent is satisfied or disappointed during a deal.

If we want to show confidence and tranquility in a conversation, we should not:

Recognizing when someone else is relaxed is important to know the right time to talk about business. So, try to make the other feel relaxed with a greeting, chat, and a smile.

Pay attention to the use of hands. When people are impatient, they often tap their fingertips on their hands. Annoyed, they rub the back of their neck. And if they scratch their heads, they may be confused by what you are saying.

When you make a deal over the phone, you don't have that ability to understand what the person is feeling without them talking about it. And it becomes more difficult to respond appropriately.

So, try to have eye contact with who you are playing with. And pay attention to each gesture, as it says a lot about people, including you.

According to Dr. Robert, in his book "Influence: Science and Practice", everyone uses influence and is a target for it. He explains that persuasion practitioners know exactly what they want and where they want to go, so they use six psychological principles to achieve their goals.

The author Mitch Antony, in his book "Selling with Emotional Intelligence", believes that skilled professional negotiators can find solutions in situations where others only see obstacles. Your secret is to look beyond your own desires and needs and see the goals of your partners.

Finally, in "Spin Selling", Neil Rackham points out that the quality of the questions asked is crucial to the success of the negotiation.

Did you like this summary of the book "Secrets of Power Negotiating"?

Do you feel more prepared to negotiate after learning with the lessons of Roger Dawson? Tell us in the comments!

Also, the complete work is available for purchase, just click on the image below: 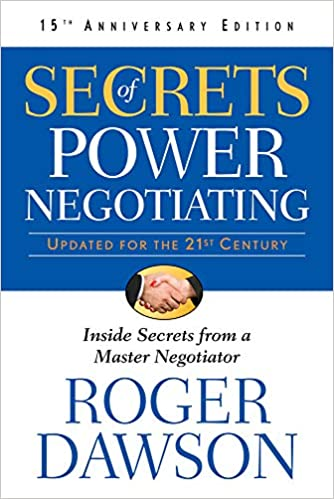