See what the trio of entrepreneurs who built the greatest empire of Brazilian capitalism has to say to you.

If you've ever tried an AmBev drink, a Burger King sandwich or even Heinz's Ketchup, then you're buying products from the company controlled by Jorge Paulo Lemann, Marcel Telles and Beto Sicupira.

These three global brands were bought by the trio in no less than five years. All this done discreetly and making Jorge Paulo Lemann become the richest person in Brazil.

Come with us and we'll tell you the whole story of this extraordinary trio and how their stories can help you.

About the book "Sonho Grande"

Published in 2013, by the author Cristiane Correa, the book tells the professional trajectory of the trio of Brazilian businessmen: Jorge Paulo Lemann, Marcel Telles e Beto Sicupira. This story is told throughout its 264 pages in 18 chapters.

"Big Dream" portrays very well the management model adopted by the trio that revolutionized the market and was able to transform their initial idea into one of the largest billion-dollar empires of the last four decades.

The writer Cristiane Correa also wrote "Abilio - Determined, Ambitious, Controversial" and "Vicente Falconi - What Matters is Result". Together, the three models represent her bestsellers and have sold more than 600, 000 copies.

She is also a journalist and speaker, specializing in business and management.

The bestseller is suitable for all those interested in transforming the level of an organization according to the visions of the richest entrepreneurs of Brazil.

It is possible to extract excellent lessons to apply in your entrepreneurial journey and thus achieve amazing results. Also, seek the much-desired financial independence.

This summary, it will explain the history of the three entrepreneurs, and present how it is the management system model proposed to achieve the results they conquered. Some ideas are:

Download the "Sonho Grande" Book Summary in PDF for free

Overview: The history of the trio members

Jorge was born in Rio de Janeiro in 1939, studied economics at Harvard and was captain of the tennis team. He began his professional life in the capital market, which provided a great experience for his career.

Jorge was always dissatisfied with the form of the corporate hierarchy. At age 31, he saw that it was time to make his dream come true and put into practice his management model. This was how Banco Garantia was founded, together with Marcel Telles and Beto Sicupira.

Marcel was born in 1950 in Rio de Janeiro. Graduated in economics, he made a career in the financial market and gained prominence after undergoing the rigorous evaluation systems imposed by this market.

He learned how foreign financial markets operate and used everything he discovered to apply in Brazil, even overnight technology.

Beto Sicupira was born in 1948, in Rio de Janeiro. He began to undertake from a very young age, having a business of used cars and selling jeans that he brought from abroad. He studied administration and tried to be a civil servant, but it did not suit him.

In one flight, Beto was introduced to Jorge Paulo and they became friends. However, Beto only went to work at Garantia Bank sometime later.

According to Cristiane Correa, the first key point is to surround yourself with good people. Jorge Paulo Lemann adopted a model called PSD (poor, smart, with great desire to enrich) to integrate his team.

Thus, they valued employees with "blood in the eye" and who really wanted to see the business happen.

In fact, the profile sought was: young, intelligent, ambitious and without previous experience. According to the trio, good professionals attract and train good professionals. So they always preferred to do it "at home".

To win and retain these talents, they adopted the meritocracy model.

Business management has always valued the most performing employees. Fixed wages were low, but the variable bonuses were high and linked to the results obtained by employees.

The trio adopted the so-called model 20-70-10. Every year the company:

In order for the big dream to become a reality, it was necessary to enter good and new people in the company. And for someone to come in, someone had to leave.

The trio identified what was essential to the business and focused on the important. No luxury cars, private jets, drivers and any other stewardship. Simplicity was the norm.

They preferred to work in jeans, backpacks in a simple way. The focus was on the incessant pursuit of cost savings to increase profit and this was how they impressed the market and the shareholders.

According to Beto Sicupira, the cost is like a nail, it is always necessary to cut. This standard is contained in all the businesses managed by the trio, being closely monitored.

Finally, they believed that, with less hierarchy, the business would become faster and less bureaucratic. So one of the measures was to end the rooms and form a large work area, where people divide the tables.

One of the mottos adopted by the trio is: do not reinvent the wheel. People should not be afraid to copy what works, after all, they pride themselves on copying good ideas.

The 20-70-10 model, for example, was first implemented in General Electric (GE). And when they bought Lojas Americanas, they paid a visit to Walmart, and what they saw was good there, they applied in their companies.

From the beginning of their careers, the same had happened when they copied the best practices of the American Goldman Sachs to the bank Garantia.

According to the book "Sonho Grande", the Brazilian trio considers that the risks are essential to achieve extraordinary results and people who dream big should not be penalized if something goes wrong, from running according to the plan.

One of the excerpts from the book portrays this point well. When Inbev's CEO decided to buy Budweiser, in case the deal went wrong, he would not be penalized even with more than $ 50 billion in stake.

Jorge Paulo Lemann already said that the biggest risk is not to take risks.

Performance and dedication have always been more important than academic certificates. But over time, all three began to see the importance of education as the business grew.

As a result, they started paying overseas training for employees. According to Cristiane Correa, it was something that worked very well and, from that, they began to invest in educational institutions. The first of these was the Estudar Foundation, later coming to Insper and Endeavor.

These institutions served as excellent means to recruit new talent for their business.

The trio has a never-stop-growing culture. According to them, we should never leave too much money stopped, we always have to apply it for business growth.

According to Marcel Telles, continued growth is necessary to enable employee growth. After all, in their business, they have many high-quality professionals and do not want to see them in their competitors.

A great example of entrepreneurs is the merger of two major rivals, Antarctica and Brahma, forming the AmBev group. But it did not stop there, and currently AmBev owns major brands like G uaraná Antarctica, Sucos do Bem, Bohemia, Skol, and Gatorade.

According to the author, they continue to advance. There have been rumors about buying Pepsico or Coca-Cola. That was in 2013, when "Sonho Grande" was published.

In the book of Flávio Augusto, "Value Generation", he shows how rather than just working for capital, how important it is to generate value for customers. By generating value in other people's lives, on the other hand, they will generate value for you.

For Gino Wickman, author of the book "Traction", successful entrepreneurs have a compelling vision and are well defined for their business. In addition, they know how to communicate this message to employees.

For author Mitch Antony in his book "Selling with Emotional Intelligence", skilled tradesmen are able to find solutions in situations where others only see obstacles. Your secret is to look beyond your own desires and needs and see the goals of your partners.

Achieving privileged positions is not easy. Jorge Paulo Lemann showed that it is necessary to have a lot of dedication, effort and a good deal of courage to take certain risks.

Remember that this trio learned countless lessons from their failures, some of them costing many millions of dollars.

However, following the management model suggested by the trio, it is possible to have excellent results. And here are some more tips:

Did you like this summary of the book "Sonho Grande"?

Did you like the review? Leave your feedback, your opinion is very important to us!

In addition, to know all the details of the book, you can purchase the complete book by clicking on the image below: 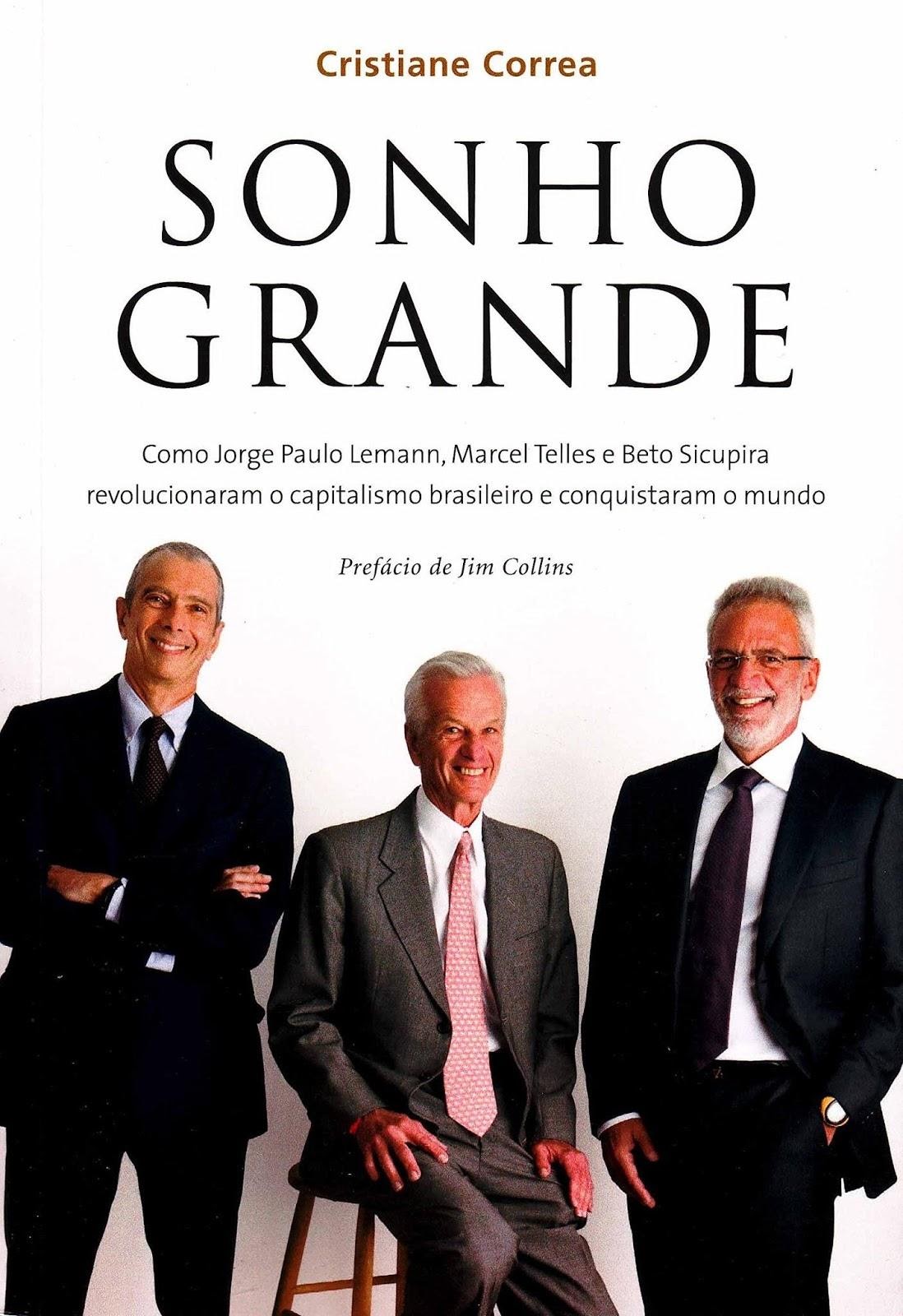