Discover how a university creation has revolutionized relationships and has become one of the most powerful and billion-dollar companies in the world.

Do you know what kind of skills you must develop to become a successful person? Ben Mezrich tells the story of Facebook in the book "The Accidental Billionaires", explaining some competences that the creators developed to boost their business!

Facebook, this social network you might use every day has a huge and fascinating history behind its creation. But few wonder how, where, and why it was developed.

What do you think about joining us here in this summary to have a dose of motivation and inspiration to leverage your results? Stay with us in this reading and discover some of Facebook's events!

About the book "The Accidental Millionaires"

"The Accidental Billionaires" by Ben Mezrich was published in 2009. The book tells the story of two Harvard students who turned a university creation into a billionaire venture, popularly called Facebook.

This whole story is recreated through many interviews, studies, and speculations of the actions and thoughts of the founders since it does not count on the participation of Mark Zuckerberg.

The content is distributed in 34 chapters, named as an important milestone or the month/year of the event. The book has 260 pages, and the report is until 2008.

About the author Ben Mezrich

Ben Mezrich was born in 1969. He is a writer and graduated in Social Sciences from Harvard College. He became known and famous for creating his own genre of nonfiction.

Ben wrote more than 10 books, including the bestseller "Bringing Down the House", "Sex on the Moon", "Busting Vegas", and many others.

The content of the book is ideal for you who likes entrepreneurial stories and intends to understand the difficulties and advances that the revolutionary Facebook had, going from a simple university idea to become a powerful and millionaire brand.

If you intend to open or already own your business, this book has teachings that will guide you to success.

Main ideas of the book "The Accidental Millionaires"

Download "The Accidental Billionaires" Book Summary in PDF for free

In October 2003, Mark Zuckerberg and Eduardo Saverin met each other at Harvard and became best friends.

Mark studied Computer Science and was considered a "human computer". According to the author, Mark declined a $2 million Microsoft's work proposal, shortly after developing software that created custom playlists according to user preference. This happened while Mark was in high school.

Eduardo studied administration and did not know much about computers and programming, but he was successful due to his investments and good networking.

One day, they went out with two Asian girls. But Mark returned home early and began surfing the internet viewing pictures of the students of one republic. And through some e-mail conversations with his friends, they had an idea to create a code to compare the photos of the most beautiful girls of the university.

The next morning, Mark had hacked the Harvard system, accessed the photos of all girls, and consolidated a database. Mark named the domain of this project as Facemash. com.

After 3 days, Facemash. com was already available. It was a simple platform that allowed to vote on which girls were the most beautiful. Still on the same day, when he returned from class, the platform had already computed about 22 thousand votes.

According to Ben Mezrich, shortly after Facemash. com had viralized it was Mark's time to get a punishment. He was called on the Harvard disciplinary board. He showed up on the appointed day, took the blame, and said he had no bad intentions.

In addition, Mark stated that there were major flaws in Harvard's security system and proposed to help solve the problem, to soften his situation. It turned out he was not suspended. It was just a warning to don't get more involved in trouble.

Soon after that, Mark received an e-mail invitation to work on a project. A Project led by the Winklevoss twin brothers. The two were tall, blond, and famous athletes, but they didn't have the skills to set up The Harvard Connection website.

The Harvard Connection was a project that aimed to put Harvard's social life online and make it easier for students to meet. Mark answered the email and said he was interested in venturing out and putting the site upright.

When Eduardo and Mark return on vacation, Mark was excited about a new site he wanted to build. It consisted of an extension of Facemash. com, with more features and an exclusive platform, where the user could create his profile with his desired photos and descriptions.

So, Mark turned to Eduardo and borrowed money to put his idea into practice. With this, they decided to be partners, Eduardo with 30% and Mark with 70%.

During that time, Mark worked tirelessly on his website, making the Winklevoss brothers project no progress, but without their knowledge. In February 2004, Mark's website was all finalized and Facebook first came online.

In a short time, Facebook began to be part of everyone's routine. In just 2 weeks after its release, there were more than 5000 registered, most of them were students of Harvard.

Because of its success, the Winklevoss brothers learned about Facebook and asked them to discontinue the site. But the requirement was not met.

In order for the site to continue growing, it was necessary to structure it better. Thus, they hired Chris Hughes, who would be responsible for the publicity; and Dustin Moskovitz, who would help with programming and receive 5% of Mark's shares.

Eduardo and Mark had already forgotten the problem with the Winklevoss brothers until the twins met with the president of Harvard claiming the two friends have violated the rights by stealing the idea of the brothers and implement it on Facebook. However, they didn't succeed, because the university considered this as a non-problem.

Facebook's growth only increased more and more. In eight weeks they already had 50, 000 students from the top 4 American universities, and statistical data reported that almost 70% of users accessed the site every day.

Given the growth, all the starting money had already run out. Thus, with the need for more investments, Eduardo created an account with a balance of $10, 000.

Ben Mezrich says that with the end of the academic year, Mark and Edward needed to better organize themselves to cope with growth.

The first step was continuous upgrades and maintenance, as there were many people accessing the platform all the time. Subsequently, they would find a way to make money through the ads on the site.

Due to the end of the academic year, Eduardo accepted a summer internship in New York at an investment bank. His idea was to generate new forms of revenue for the site. Mark and Dustin left for California to work on Facebook. The goals of both were to get the site to reach more than 100 universities.

In California, Mark met with Sean Parker, a guy who had always wanted to work on Facebook, but there was always retention by Eduardo. Parker was homeless, so he decided to take the invitation and move in with Mark.

Mark knew it would be a good opportunity because Parker had good knowledge and could leverage the results of the site. On a certain day, Eduardo arrived in California and saw Parker meeting with investors for Facebook. This caused Eduardo to block the company's account.

With that, Mark asked Parker for help, and then he got an investor capable of putting $500, 000 in exchange for 7% of the company.

In April 2005, Facebook was growing at a high speed, it had reached about 500 universities and 3 million people. At the same time, Eduardo was called by Mark to a business meeting. Arriving in California, there was only Mark's lawyer, demanding that some documents were signed.

According to Ben Mezrich, the lawyer told that Eduardo was no longer part of the company and he was just part of the team so far due to the investments.

Eduardo verified that he was being scrapped and his percentage was being diluted. For him, there was no other way out than to sue Mark for 30% of the company. Meanwhile, Mark and Parker were busy with Facebook's growth strategies in the Silicon Valley.

Things have been evolving, Parker has become Facebook president, but before long he was arrested for drug possession, leading him to leave Facebook and become a partner of another company.

In Mark's view, Facebook was nothing more than a revolution, a revolution in exchange for information. In 2007, Microsoft eventually bought 1.6% of Facebook for $240 million.

In the "Effective Executive", Peter F. Drucker makes it clear that executives can be brilliant, imaginative, and informed, but not inefficient. Effective executives are systematic. They work hard in the right areas and these knowledge professionals help the company to get results.

In the book "Inside Steve's Brain", Leander Kahney says that one of the causes of Apple's success is because Steve Jobs puts the user experience as a top priority. We can see this perfectly in Mark's willingness not only to create Facebook, but also to share with everyone and make the user experience better and better.

About the importance of the Internet for marketing, Seth Godin, author of the book "This Is Marketing", explains that the internet has changed the rules of the game. It is the most massive communication medium ever created, connecting billions of people.

The great teaching we can derive from this reading is that we must put our dreams into practice. But how?

Even if you're not prepared, go ahead. After all, on the way you will discover the ideal preparation, you will fail too but this will make you stronger and closer to your dream.

Another point we can consider is that to build a monstrous company like Facebook, it takes 100% commitment. We can conclude that Eduardo was only the initial investor and not someone who lived and breathed the business like Mark Zuckerberg.

Don't just do your business, but live it. And work tirelessly in search of continuous improvement and success will appear.

Did you like this summary of the book "The Accidental Millionaires"?

Are you feeling more inspired and motivated to follow your dreams and build a huge career? Did you find this content useful? Leave your feedback in the comments! 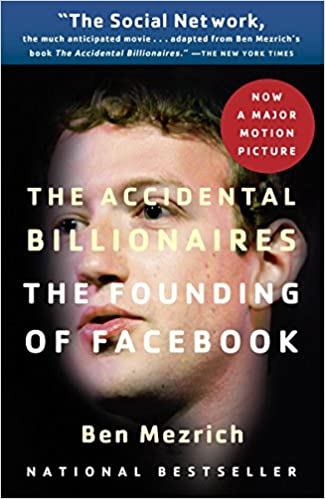