Learn the history of the company that, contrary to all expectations, moves billions of dollars as it grows dizzily.

At the height of the Great Recession, Brian Chesky, Joe Gebbia, and Nathan Blecharczyk came up with such an innovative idea that few believed it to be profitable. Undeterred by criticism, friends continued to invest in what is today Airbnb, a globally operating company that has grown from zero to $ 30 billion in nine years.

Having a good idea is not enough for the success of a company. Running a business requires constant learning. Keeping this in mind, the story of Chesky, Gebbia, and Blecharczyk is an inspiring guide and you can follow this summary of the book "The Airbnb Story".

Wondering how, contrary to all expectations, Airbnb has become one of the most successful startups of recent decades? Then call the PocketBook we have prepared for you!

About the book "The Airbnb Story"

Written by Leigh Gallagher, "The Airbnb Story" was published in 2017 by Houghton Mifflin Harcourt.

Gallagher addresses the company's history since its founding in 2008, through the rapid development and challenges that its founders had to overcome over the years and the prospects for the future of the Airbnb brand.

About the author Leigh Gallagher

Leigh Gallagher is a graduate of Cornell University. In addition to the author, she has collaborated as editor of Fortune magazine, overseeing columns such as "40 under 40".

The book "The Airbnb Story" is indicated for entrepreneurs looking for inspiration to turn their innovative ideas into successful businesses and also know how to drive the development of their business.

Main ideas of the book "The Airbnb Story"

Download the "The Airbnb Story" Book Summary in PDF for free

Brian Chesky and Joe Gebbia became friends at Rhode Island Design School, where they worked together developing products for the Conair company. In 2007, Gebbia convinced Chesky to move to San Francisco to start a company.

The concept of home-sharing that would later become Airbnb came from the need for friends to rent out. After deciding to invest in the idea, they invited computer engineer Nathan Blecharczyk to join the "founding team".

They made contacts, but no one wanted to invest in the company. At the time, the idea sounded absurd. Undaunted by the criticism, the three continued to develop their product.

The first chapter of the book chronicles the creative solutions that the trio developed to keep the company in its early stages. To pay off the company's debts in 2008, for example, Chesky and Gebbia sold a limited edition of cereals named after that year's top presidential candidates.

Entrepreneur Paul Graham, particularly impressed by the cereal strategy, decided to accept them on the "Y Combinator" startup development platform. Through the project, they made a sizable investment and the company took off.

A major differentiator of the Airbnb product is its focus on developing user interaction, a priority for the company's investments by 2011. The data cloud has made the process faster and cheaper.

The platform has a sophisticated algorithm that adapts the display options displayed to consumer behavior, as well as a robust customer service system.

In April 2009, Airbnb reached the "Product / Market Fit" milestone, meaning it developed a product that satisfies a good market. From that moment on, the challenge became to keep up with the growing demand for the service.

The team gradually grew. Before hiring new employees, the founders decided to build on their core values, taking inspiration from companies like Starbucks, Apple, and Nike.

Today, the company has more than 2.500 employees and mobilizes millions of hosts and travelers around the world.

The Airbnb catalog offers a variety of options, styles, sizes, shapes, levels of host interaction, and especially price. It is important to remember that the company was founded at the height of the Great Recession of 2008.

The diversity and whims of the options offered make strolling through the Airbnb listings an exercise in escapism, from the castle to treehouses. However, most options are utilitarian.

The platform is responsive, accessible and inviting, aligning with the tastes and needs of the modern consumer. Contrary to standard hotel chains, Airbnb offers the authentic experience of a local.

Overview: "The ugly and the dirty"

These are rare and practically unpredictable cases that generate great repercussions in the media. The chapter cites the stories of EJ, a hostess who in 2011 had her apartment destroyed by guests; Loughlin, who fell victim to fraud in 2016; and a Massachusetts traveler who was the victim of sexual harassment by his hostess.

As shown in the chapter, Airbnb deals with every crisis as an opportunity to improve its services. The company currently has a Trust and Security industry, which is engaged in predicting potential problems, emergency resolution, and damage control.

Each problem is rated from level one to four according to the severity of the situation, and a screening system directs the right cases to the right people as quickly as possible.

Overview: "The wrath of the air"

Many consider Airbnb a threat to the safety and quality of life of local residents, as well as predatory interference in the real estate market. In late 2014, an "anti- Airbnb" political action committee was formed called Share Better.

The addition of attorney Belinda Johnson to the team in 2011 brought a more conciliatory approach to Airbnb 's approach to its opponents, and the company acts flexibly to legalize its activities.

Airbnb mobilizes its hosts as a protection strategy and defends itself by saying that its service boosts money through tourism and helps ordinary people earn additional income.

Airbnb 's real innovation was that it was an almost entirely urban phenomenon. The trend popularized by the company made it possible to identify new niches. Today, innovative businesses are emerging every day to fill the needs of modern travelers.

One of the central points of the chapter is Airbnb 's relationship with the increasingly competitive hotel industry. Following the trends that propelled it, hotels seek to adjust to changing market needs.

Chesky, Blecharczyk, and Gebbia are unusual because they are still together. Throughout the company's development, its roles have evolved and changed significantly. And the stance of the three founders reflects the behavior of all Airbnb employees.

Brian Chesky is an entrepreneur invested in absorbing new information and improving his performance. He always shares the knowledge he acquires with his collaborators. During Airbnb 's expansion process, it had to learn to think internationally.

Nate Blecharczyk's role in product development and the company's digital promotion strategies was subtle and fundamental. Joe Gebbia, responsible for the essence of the Airbnb concept, had to learn to be more direct, dynamic and abandon perfectionism.

Overview: The next step

By 2017, when the book was published, Airbnb was in its ninth year of so-called hypergrowth, when company revenues essentially double annually. And Chesky says there is still a vast market to explore, citing less urban cities and China.

The chapter also addresses the possibility of going public on Airbnb, which Chesky says is not an immediate necessity. Gallagher notes that in a publicly-traded company, the focus becomes a return to investors, which may interfere with its mission.

The author Leigh Gallagher concludes the book "The Airbnb Story" by saying that there is still much to deal with at the moment. At the annual Airbnb event, a new direction was introduced for the company, which includes a new category of travel products, services, and experiences.

"Different" is a book that talks about innovating in the market. The author Youngme Moon reports the mistake made by companies that want to level with the competition. This process of competition makes companies actually achieve a general market average, causing "competitive herd".

In the book "Dream Big", Cristiane Correa complements the idea of personal strategic planning and stresses the importance of maintaining a continuous improvement process to achieve her goals. Her ideas were inspired by the visions of the richest entrepreneurs in Brazil.

In "Grinding It Out: The Making of McDonald's", Ray Kroc, one of the founders of McDonald's says to find our differential. Do not be overwhelmed by a mistake that will give you up on your dream. Even the most successful people have overcome many failures that are part of the path to success.

The key to Airbnb 's success lies in balancing the potential of its founders. Chesky, Blecharczyk and Gebbia, with their innovative self-promotion and problem-solving strategies, demonstrate the importance of an effective team for the success of an idea, no matter what.

In addition, this work is a great inspiration to give you the message that you should embrace your idea and put it into practice. The important thing is never to give up and always seek to improve.

Airbnb 's trajectory is still ongoing and is worth following.

Did you like this summary of the book "The Airbnb Story"?

Be sure to rate this summary, and leave your feedback in the comments. Your opinion is truly inspiring for us to improve our content for you!

Want to know all the details of Airbnb history? Then get the full edition now available for purchase on Amazon: 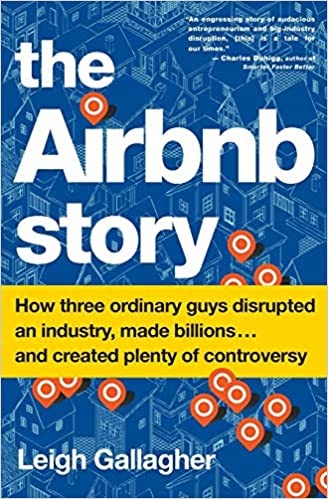